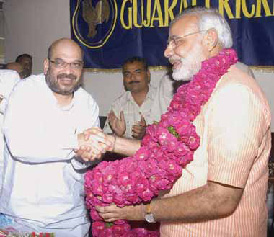 Two senior civil servants of Gujarat – who also happen to be brothers – are facing the full blast of the Narendra Modi government’s wrath after the older brother, a top cop, resisted pressure from political masters in various key cases. He even had the gall to recommend a CBI investigation in a bribery case against his political boss – the minister of state for home Amit Shah.

Last month Kuldeep Sharma’s younger brother Pradeep Sharma, a Gujarat cadre IAS officer last serving as municipal commissioner of Bhavnagar, was arrested in the early hours of the morning by cops for alleged corruption in the allotment of land for rebuilding a wholesale market in Bhuj, which was destroyed in the 2001 earthquake. Sharma was then the district collector of Kutch. The cops virtually barged into his official residence to pick him up and take him across 200 km and produced him in a Bhuj court. The intensity of the administration’s anger can be gauged from the fact that more than a month later this one time blue eyed boy of the Modi government continues to languish behind bars with his bail petition before the High Court.

The CID also arrested the former president of the Bhuj Chamber of Commerce and Industry Arvind Thakkar, and office-bearers of the Bhuj wholesale market, Pravin Kothari and Shambhu Popat. They have been accused of misappropriating funds through bogus documents showing property damaged in the earthquake and allotted under the Rs 70 crore rehabilitation scheme of the state revenue department. The alleged fraud was committed under the
umbrella of Bhuj Jathabandh Bazaar Navnirman Charitable Trust. They had also allegedly facilitated loan subsidies to non-beneficiaries from the District Industries Centre.

Pradeep Sharma has refuted the charges and claimed that he has been framed on the basis of false documents.

In two complaints filed with the Bhuj chief judicial magistrate, Sharma said he had fallen victim to conspiracy against him and his brother Kuldeep Sharma, a senior IPS officer, for not giving in to political pressure. “This is a conspiracy against us. My brother is an honest and dedicated officer. He had taken action against underworld don Abdul Latif as chief of the anti terrorist squad (ATS) in Ahmedabad and solved many other cases. As he has not succumbed to any pressure, he is being treated unfairly by the current political dispensation,” Pradeep Sharma’s counsel SV Raju quoted from his
complaint. “As part of the same conspiracy, I am being targeted for something in which I have not been involved.”

His complaint names a host of officers, including CID (Crime) ADG VV Rabari and Bhavnagar superintendent of police Rajendra Asari, seeking an inquiry against them.

Sharma’s complaint further stated that fake evidence has been created against him and that there should be an inquiry into the matter under 156 (3). Sharma said it was not mentioned anywhere in the government memo dated Sept 3, 2002 and Aug 8, 2003, that land could be allotted to a particular category only. The order was given to allot land to the “Bhuj Jathabandh Bazaar Navnirman Charitable Trust” formed by the earthquake affected shop owners. It was the trust that was supposed to allot plots to individual shop owners. As a collector, he had no role to play in the allotment of
land he said adding that in case of any breach, the land should be taken back. Sharma has also taken the plea that following complaints of a breach of trust, an inquiry was ordered at the level of the deputy collector, but he was transferred before the inquiry report was tabled.

In his plea before the High Court the former district collector has claimed that the decision to allot land to dubious claimants was not his but that of the state government. Sharma, through his lawyer SV Raju has claimed that it was the Bhuj Bazaar Navnirman Charitable Trust which was to suggest members or traders who were earthquake-
affected and had to make a representation to the collector. The state government directly approved the names of those allotted and finalized the plots. Sharma, in his plea has also contended that the way he
was arrested was flawed and with malafide intention and that he was not given a chance to explain his position. In 2006, Henry Chacko from the NGO – The All-India Anti-Corruption and Crime Preventive Council of India, Gujarat – filed a complaint against Sharma and other officials charging that the allotments were made to dubious persons.

Meanwhile elder brother Kuldeep Sharma, in his petition filed before CAT in Ahmedabad has alleged bias on the part of Modi and Shah to thwart his prospects of being promoted or deputed to the Central government as joint secretary. Sharma has alleged before CAT the misuse of their administrative powers to turn his annual confidential report from “outstanding” to “very good” for the years 2003-04 to 2007-2008.

He has also alleged that to stop his deputation to the Central government, the two got a departmental charge sheet issued against him. About his posting as managing director of the Gujarat Sheep and Wool Development Corporation (GSWDC), Sharma stated that an IAS officer of lower rank generally mans the post. For the first time an IPS officer of additional director general of police rank had been given this posting at a time when many posts of his rank were lying vacant in the state police, he pointed out. In addition to the state government, Narendra Modi and Amit Shah, Sharma has also made the director general of police and the Union of India as respondents in his petition.

In support of his claim of bias on the part of the chief minister and the minister of state for home, Sharma has stated before CAT that in around 10 criminal cases, his actions as the chief of the state CID(crime) went against their wishes.

1. As in charge of the state CID(crime) it was he who had directed that the first interim report in the Sohrabuddin Sheikh fake encounter case be submitted before the Supreme Court which triggered off a chain of events that put many police officers behind bars.

2. One Jayesh Joshi, arrested from Sabarkantha by the CID in 2004 for forgery had Amrut Patel from the chief minister’s office intervene claiming his innocence.

3. In a 2002 communal riots case in Banaskantha district, the district BJP president Mahesh Dave was one of the accused. He sought to present an alibi to the contrary. While investigations into the case were on, Sharma has stated, he received a letter from the home department stating that he should discuss the matter with the minister.
The letter notwithstanding, a thorough probe was carried out and Dave’s alibi exposed and he was arrested.

The top police officer has also stated that against the wishes of his two top bosses, the chief investigating officer had proved that the then BJP minister Prabhatsinh Chauhan had hatched a conspiracy to frame another minister Kanjibhai Patel in a case. Citing another example he has stated that in an alleged human trafficking case in 2003, involving the renowned danseuse Mallika Sarabhai, Amit Shah had pressurized him to get her arrested and charge-sheeted. In another case cited by him, it has been stated that under the directions of the High Court, the CID had registered an offence of extortion against one Kamlesh Tripathi, a close associate of home minister Shah. He has stated that Shah brought immense pressure on an SP rank officer to not register the case. Sharma has also charged that as the CID(crime) chief of the state he had drafted a letter to recommend a CBI enquiry into an application related to the multi-crore Madhavpura Mercantile cooperative bank scam. In the application certain allegations had been made against Shah. Sharma has also alleged that he had been transferred in violation of the Gujarat Civil Services Rules.

Interestingly the top cop who had been handed over a charge-sheet some time ago, has also been issued a show-cause notice by the home department. The charge-sheet had reportedly been handed down in connection with a case filed against him by the state government which charged him of filing a case against a senior police officer without
taking the permission of the state government. Sharma had registered a non-cognisable complaint against senior IPS officer GS Malik, after he failed to record a statement for an offence under the Official Secrets Act. The law delineates that if a police complaint has to be filed against a class I officer by any government employee, he has to take prior permission of the state government. Sharma, it seems, did not take the necessary permission and hence the charge-sheet. The state home department has also issued a show-cause notice to Kuldeep Sharma for allegedly misleading the government on him being awarded the President’s medal. The show-cause notice asks Sharma to explain if he had intentionally hidden the details of offences registered against him to claim the President’s medal.

One Response to “Modi govt nails him, jails IAS brother”