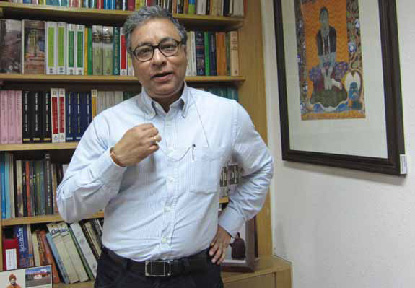 A bee line outside the office of Jawhar Sircar, Secretary, Ministry of Culture, is an indication of this bureaucrat’s popularity. And this is a regular feature. You are likely to spot other bureaucrats seeking his advice, or foreign delegations wanting to collaborate on projects, among others waiting to see him. It’s quite apparent that Sircar is more than just someone who occupies his official chair. The well-read, well-informed, well-travelled and versatile bureaucrat is quite sought after. In the evenings, you can catch him at events sporting a traditional dhoti-kurta. But by day he is in his smart corduroys and matching shirts. In fact, it is his very “un-babu” like dress sense that’s speaks volumes about his personality. He is articulate and thorough about his subject. The Calcutta-born and St Xavier’s School and Presidency College product is truly a new-age bureaucrat who sets his own rules. Born in 1952, he graduated in Political Science and later pursued his Masters’ degree in two different subjects (sociology with social anthropology and ancient Indian history and culture). Much later, he also studied at the University of Sussex and at Queens’ College, Cambridge University. A 1975 IAS batch from West Bengal cadre, he has held several postings including director of industries, before moving to the government of India in the Ministry of Commerce. Upon his return to West Bengal in 1992, he set up the new Food Processing Industries Department and then moved to the Finance Department as Special Secretary.  He also served as the Commissioner of Commercial Taxes. In 1997, he took over as the Chief Electoral Officer of West Bengal and successfully conducted the 1998 and 1999 parliamentary elections. In 2000, Sircar was literally hand-picked by Buddhadev Bhattacharjee, Chief Minister of West Bengal. As the youngest-ever Principal Secretary of Commerce & Industries Department he was asked to vigorously turn around the state’s industrial climate and image. He accomplished the task with success. He was then entrusted the job of modernizing the higher and technical education sectors in West Bengal as Principal Secretary where he introduced several innovations. In May, 2006, Jawhar Sircar took over as the Additional Secretary and Development Commissioner for Micro, Small and Medium Enterprises.  He was promoted as Secretary to government of India in September 2008, and then moved to head the Ministry of Culture. He is a scholar and has published several articles and research papers on history, culture and society.  His monograph on “The Construction of the Hindu Identity in Medieval Western Bengal: The Role of Popular Cults,” was well received in India and abroad. Culture and tradition are his passion. His office is strewn with artifacts that have been handpicked by him. Hoihnu Hauzel in a chat with the man finds out that Sircar is more than just a bureaucrat.

Current: What are the activities that you are involved with?

Sircar: I have been actively involved with many cultural and academic bodies like the Asiatic Society, the Victoria Memorial, and the Centre for Archaeological Studies and the Kolkata Museum of Modern Art.  I have been associated with one  of the largest and most successful book fairs of the world — the Kolkata Book Fair — since its inception. I have also been a part of a team which  established NGOs, like the Concern for Calcutta.  From the late 1990s, I also  took the lead in upgrading the annual Kolkata Film Festival to a remarkable and  recognized event of international standards.

What are your other interests?

Theatre for sure is where I have been involved right from my mid-teens and in certain genres of music and dance. I am is also an unapologetic bibliophile and  own a large personal library that covers a wide range of subjects. I have  retained an abiding interest in a large spectrum of visual arts, from folk forms to the classical, modern and contemporary. My ‘weakness’ for the ethnic helped me revive the craft traditions of West Bengal in the mid-1980s.

It was my passion for books that pushed me to collect either an ethnic piece or  some folk song (or both) from most of the 34 countries that I have visited so far.

Tell us about some of your research works.

I began my research with the history of old Calcutta and then moved on  to the study of folk cults mainly in Bardhaman district of Bengal.  From 1996, I  took up serious research in social anthropology and was the director of a field research project that covered 78 sites of ‘popular religion’ in six districts of Western Bengal.  The present focus areas of my research are ‘the construction of identities’, the ‘de-construction of religious phenomena’, folk religion, as also in popular culture and its interface with the semi-classical and classical  forms.

How can we make our monuments more attractive for tourists and domestic visitors?

None of our monuments have audio guides. Now, finally we have started an audio guide in  Qutab Minar since last year. In fact, Archaeological Survey of India started with one  language (English) and I had told them to get in at least two languages  including Hindi.

Describing a monument in its architectural nature may not be of interest to a visitor. Such audio guides should tell the story with a sense of romance to draw interest.

Say, Noor Jahan or the romance of battle, to recreate the period. When such  narration is done by a proper body in a systematic manner, history becomes  authentic and interesting. Sometimes guides tend to exaggerate and this  reinforces prejudice. Adding a bit of colour is alright but it should not harm history. Hence, the need to systematically package history.

And today there is a huge choice in audio guides. Gone are the days when you were stuck with bulky headphones. For instance, you can have a system that is radio  frequency triggered wherein if you go pass some important exhibit, it can tell  you exactly where you are and explain what the monument is all about. I would  say, it is not only a question of technology but it will also be about the state  of the art technology. It has to be packaged well with the right information and  right accent. At least everything could be bilingual in the north and trilingual in south India.

Do you think better signage will make us more aware of our monuments?

Whereas the world has gone on to a very impersonal signage and communication system. In the world they do not even want to ask their neighbour their  names. In India, signage is poorly developed. It is not a part of our culture. A small  example, during the Commonwealth Games, when I got down from my car and wanted  to get in, there was no signage. After a point, it gets difficult without proper signage.

We are trying to craft this signage culture and it may take us 10 years to get there.

Some of your achievements in the Ministry of Culture.

We have been able to win on some accounts. For instance, we have been able to increase the number of performing arts. When I came here, there were 200 groups  of performing arts all over India who were getting annual grants. We have also increased the amount of annual grants from five lakhs to 20 lakhs. We have also increased the number of cultural scholars from 100 to 200 scholars. We have been able to double it in a year. Earlier senior scholars would get Rs 10,000 per  month, now we have increased it to Rs 20,000 per month. The selection procedure, however, is not with the ministry. We are not involved in the procedure as we  leave it to the experts to decide. And of course, there is a strict  selection criterion that is followed.

What would be your most meaningful stint?

What is your success mantra?

Innovation has been my mantra. Wherever I go, I try to be innovative. That is because I do not go by convention.