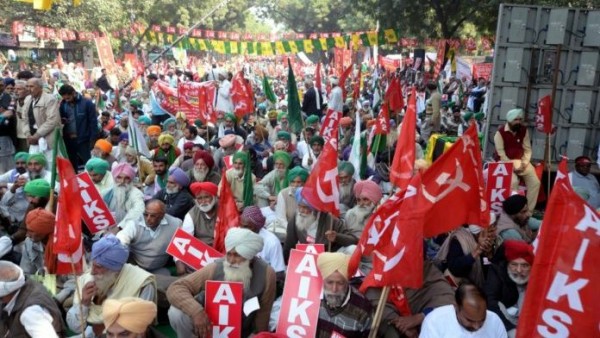 Farmers throng Delhi to draw attention to their problems.

Thousands of farmers from across the country held a protest march in Delhi and organised a 'Kisan Mukti Sansad' or mock Parliament session to present two bills on crop loans waiver and remunerative prices for farm produce.

The protest march organised by the All India Kisan Sangharsh Coordination Committee (AIKSCC) — an umbrella body of 184 farmers organisations — started from the Ramlila Maidan and ended on Parliament Street near Jantar Mantar.

“We want Union Agriculture Minister Radha Mohan Singh to visit the Kisan Sansad and hold a discussion with farmers,” Kirankumar Vissa, a farmer activist from Telangana, said, The bills will be sent to Prime Minister Narendra Modi.

All members in the mock session were women, who spoke about their sufferings due to the “wrong and anti-farmer policies” of the government.

Lok Sabha member and farmer leader Raju Shetti tabled the bills, which were then discussed.

“We will pass these bills in the evening after discussions,” Shetti said.

Criticising the NDA government for “failing” to fulfil its promise of 50 per cent profit over crop production cost, the farmers warned it of repercussions during the 2019 Lok Sabha election.

Pooja More, a farmer from Maharashtra, said thousands of farmers had committed suicide as the government had no concern for them.

“There are leaders who make tall claims but do nothing. The current system is not beneficial to farmers.”

“We grow pulses, grains, and sugar cane on our 10 acres. Despite good yield, we could not even recover the production cost. So, my brother committed suicide,” she said.

Many farmers said they were under tremendous financial burden due to the fall in prices and lack of government help. (IANS)