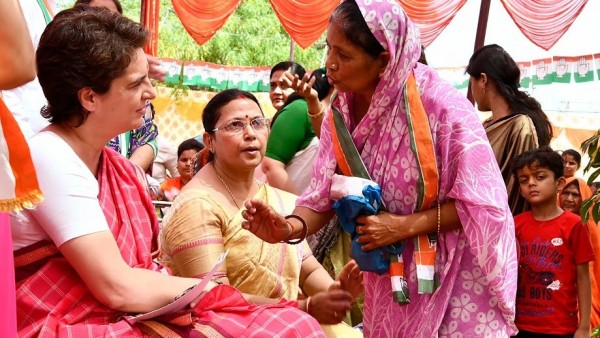 “If BJP leaders, who talk big about patriotism, are true patriots, they would respect martyrs of the country — whether that martyr is Hindu or Muslim or the father of their political opponent. He is a martyr. You can’t be selective in which martyr you respect. If you are true patriots, respect all martyrs including Rajiv Gandhi and Indira Gandhi,” she said at a street corner meeting here.

Calling the upcoming elections crucial for deciding the fate of the country, Vadra told the gathering that she was there to remind them of what true patriotism was all about.

“Every election, the BJP brings up the issue of patriotism and there is no talk on issues like development. I am here to remind you what true patriotism is all about,” she said.

She said the Bharatiya Janata Party (BJP) asked people to stand in queues to deposit their money in banks calling it a patriotic act that would bring back black money.

“Did black money come back? Not even a single paisa… True patriotism is believing in democracy and casting your vote responsibly by choosing those who work for you, and those who deliver on their promises. Political leaders quickly forget who brought them to power. You need to be aware and you need to remind them,” Vadra said.

Attacking Modi, the Congress General Secretary said that when she went to Varanasi, the Prime Minister’s constituency, she was told the government had built a 15-km road from the airport to the city in the name of development.

“The Congress had announced that road spanning 150 km, and they built only 15 km from airport to the city so that it is visible to people,” she said.

She also claimed that people told him that Modi did not visit a single village in the constituency after becoming the Prime Minister.

“This is his patriotism that he can visit Africa, US, China, Japan, Pakistan…have biryani and come back. But he can’t come to his constituency to ask the well-being of even a single family.”

Gandhi said unlike Modi’s promise of Rs 15 lakh in every Indian’s bank account, the Congress would deliver on its Nyay scheme which promises Rs 72,000 annually in bank accounts of the poor.

“We waived loans of farmers in Madhya Pradesh, Chhattisgarh and Rajasthan in 10 days after forming government… Congress has proved it can deliver — be it MGNREGA or farm loan waivers,” she said.
Senior Congress leader Sonia Gandhi also attacked Prime Minister Narendra Modi government and said that a new definition of patriotism is being taught to people wherein those who don’t accept diversity are treated as patriots.

“Today, we are being taught a new definition of patriotism. Those who are not accepting diversity are called patriots,” Gandhi said while addressing Peoples’ Agenda – Jan Sarokar 2019 — in Talkatora Stadium in the national capital.

“Discrimination against the citizens is justified on the basis of caste, creed and ideology,” UPA Chairperson Sonia Gandhi said.

She alleged the Modi government was not ready to respect dissent and that the government has been found wanting whenever people who stick to their faith are attacked.

She alleged that the government is not doing anything to enforce law and order, instead, the current government has undermined the welfare architecture that was laid down over the last 65 years.

“We need to reclaim our constitutionally guaranteed freedoms and rights and secure the life of dignity and security for our people,” she added.

She said that if the Congress party voted to power, a system will be in place to monitor their implementation.

She said when UPA was in power, under the leadership of Manmohan Singh, government and civil society worked together.

She said that it was not an easy task, but with the support of civil society, UPA government spearheaded policies that gave shape to the dreams and aspirations of fellow Indians.