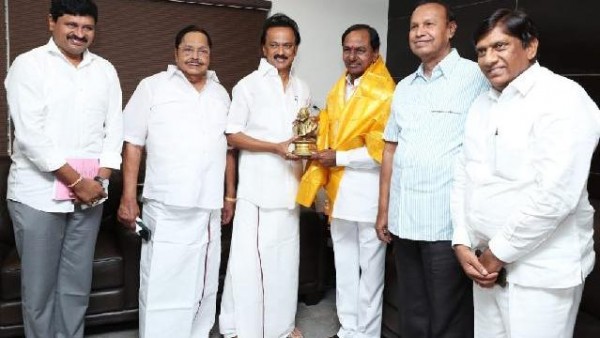 With just one round of polling remaining, Telangana Rashtra Samiti (TRS) on Saturday expressed confidence that the regional political parties would garner a major chunk of Lok Sabha seats and would bind in the form of a 'Federal Front' for governance at the Centre.

He is also in touch with YSR Congress Party (YSRCP) chief Jaganmohan Reddy and leaders of some other political parties for this purpose.

Rao, who is popularly known as KCR, also met DMK chief M.K. Stalin recently besides holding talks with Janata Dal (Secular) leader HD Kumaraswamy. Significantly, both the DMK and the JD(S) are allies of the Congress, unlike the SP, TMC, BJD, CPI-M and YSRCP, which have so far displayed equidistance from both the BJP-led NDA and the Congress-led coalitions.

Rao’s close associate and TRS MP B. Vinod Kumar told said that although the party chief was in touch with leaders like Naveen Patnaik, Mamata Banerjee and Akhilesh Yadav, the discussions were not about who will go where.

He said KCR was in touch with the leaders of various political parties with regard to the formation of a Federal Front.

“When we met Kerala Chief Minister (Vijayan), he also agreed. KCR also spoke to the Karnataka Chief Minister,” Kumar said, adding, “All of us will sit together and put forward the decisions before the new government.”

However, the “political strategy” will be finalised after the election results are declared, Kumar said.

When pointed out that DMK and JD-S, whose leaders KCR had met, were already part of the United Progressive Alliance (UPA) and whether there was any scope of them leaving the Congress-led alliance, the TRS leader reminded how the UPA was formed after the 2004 Lok Sabha elections and how the National Democratic Alliance (NDA) was formed after the 1998 polls.

“KCR’s concern is that whatever formulation emerges after the elections, we should put forward our issues by supporting that formulation,” the TRS leader said.

Asked about a possibility of TRS, BJD and YSRCP jointly deciding on a common strategy after the elections, Kumar said, “It will depend on the outcome of the polls and whether there will be a necessity of these parties.”

Accordingly, a call will also be taken as to which parties to go with, he said.

Kumar, who accompanied his party chief for the meeting with Stalin in Chennai earlier this week, said the discussions focused on how regional parties should have a say in the policy decisions of the government of India.

He said despite the country having a federal structure, the regional parties don’t have a say in the governance at the Centre.

This is the idea behind the ‘Federal Front’, which aims to ensure that the interests of states are taken care of, he said.

“We want that regional parties should have a say in policy decisions of the government of India,” the TRS leader said, adding that the main issues were devolution of funds to the states and other matters related to the Concurrent List of the Constitution.

To ensure that, regional parties have to be together and bargain, Kumar said.

“Our idea is that we want to push forward our Federal Front agenda, i.e., the states should be given more power, they should be considered while taking major decisions. We want to discuss all these points. We don’t know who will agree to this or what will be the outcome. All these things will happen only after May 23,” Kumar said.

“We have issues concerning states which are ruled by the regional political parties. There are many subjects under the Concurrent List which we think should be deleted. Education, health all these issues. There are also other issues regarding devolution of funds,” he said.

On the prospective outcome of the Lok Sabha polls, he said, “TRS believes that regional parties will get a major share of seats”.

When asked about the contentious issue of who would be the Prime Ministerial candidate of a regional front, if it is in a position to form the government, the TRS leader merely said, “We will discuss, debate and finalise after the results are out.” (IANS)