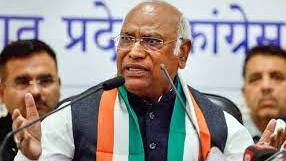 The decline of a political party is inevitable when it does not learn from its mistakes. The Congress refuses to learn that indulging in personal attacks on Modi backfires on it every time. Modi uses it to the hilt to garner the sympathy of the people when the audience is in Gujarat, it plays into the theory that Gujarat pride has been insulted and must therefore be avenged. Mallikarjun Kharge, the new president of the Congress, has joined the list of Sonia Gandhi, Mani Shankar Aiyar, Madhusudan Mistry and others in gifting Modi an election windfall.

Kharge yesterday compared Modi with Ravan, the ten-headed demon who Lord Ram destroyed. While talking about Modi’s omnipresence in all kinds of elections, be it local or parliamentary, he said, “We see your (Modi’s) face in corporation election, MLA election or MP election, everywhere – do you have 100 heads like Ravan?”

The BJP swooped in immediately. “What Kharge said is condemnable and shows the mindset of the Congress,” said party spokesperson, Sambit Patra, “This is not an insult to Modi but to every Gujarati.” Patra also exhorted the people of Gujarat to correct this insult to the son of their soil by voting for the BJP in the coming days. The Congress tried to regain some ground by saying that Patra’s attack on Kharge was an anti-Dalit tirade.

As I said in my last column, such personal attacks in my opinion have very marginal impact in the elections. The BJP, led by Modi, wins elections due to multiple factors. Its leaders, including Modi, are always on their toes. They know that in an electoral battle, what matters is victory; capturing power by any means is the cardinal principle. No wonder, every election be it municipal or parliamentary, is fought with gladiatorial instinct. In this context even the minutest of their opponent’s mistake is exploited to the optimum. Kharge’s statement and Patra’s reaction should be seen in this context.

Kharge is no novice to politics. He is 80 and has spent five decades in active politics. He is not an ordinary member of the Congress, he is the party president. His words now carry a lot more weight than they did earlier. After becoming the Chief Minister of Gujarat, Modi deliberately evoked Gujarati nationalism and made himself synonymous with that feeling. He packaged himself as a selfless, ordinary Gujarati who has scaled great heights in public life with sheer hard work and without any family connections; he also likes to signal that even after becoming PM, he is devoted to his home state.
A large section of Gujarat votes not for the Chief Ministerial candidate or the party, but for Modi personally. The BJP will fully exploit Kharge’s statement and this in turn will make the Congress unnecessarily defensive.

In 2007, Sonia Gandhi, referring to the riots of 2002, called Modi ‘Maut ka Saudagar’ (The merchant of death). Modi was later given a clean chit by the Supreme Court. But at the time, many believed that he could have lost the election had Sonia Gandhi’s remark not turned things around. In 2017, Mani Shankar Aiyar’s ‘Chaiwala’ jibe was also used by Modi and his party. He painted the Congress as anti-poor who had insulted poor Gujaratis. Aiyar was a serial offender. He went on to call Modi ‘neech’, someone who belongs to a lower caste. Very recently, a senior leader of the Congress ,Madhusudan Mistry, said that if the Congress wins, Modi would be shown his place (aukaat). Modi immediately went to town and said, “I have no aukaat because I don’t come from an affluent family.”

It’s not that Modi and his party do not indulge in personal attacks. Be it Mamata Banerjee or Arvind Kejriwal or KCR, he spares none but he has the uncanny ability to turn an attack on himself into an election issue. His party and propaganda machine repeat it ad-nauseam to create an ecosystem that help divert public attention. The Congress has to realise that if they want to defeat Modi, they must not let the discourse move away from issues like price rise and unemployment, genuine issues which hurt people everywhere.

Kharge was expected to change the mindset of the Congress but it seems he has not learnt from the party’s past mistakes.