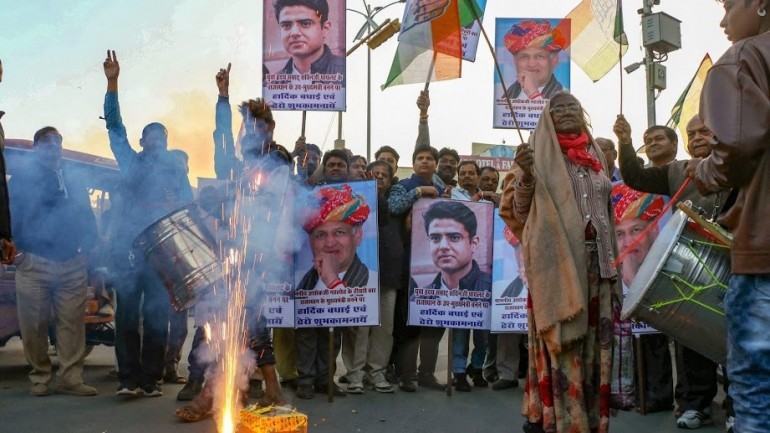 The united colours of Rajasthan.

At the heart of the dispute remain deep mistrust and insecurities. Gehlot firmly believes that Pilot is the BJP’s Trojan horse, while Pilot says he burnt the midnight oil in Rajasthan for five years to bring his party back to power, only for the CM’s chair to be snatched away from him.

Sometimes, in politics, not taking a decision is also a decision. The Congress seems to have adopted this as a mantra in Rajasthan for the last four years. However, this indecision may hit the party dear with just a year to go for elections now and the situation may end up like in Punjab.

“There is nothing in the constitution like a deputy chief minister,” Chief Minister Ashok Gehlot had remarked to me at the CM’s residence in Jaipur in 2019, answering a question on the oft-repeated ambition of then deputy CM Sachin Pilot to replace him. A day earlier, Pilot appeared to be questioning Gehlot’s leadership, referring to the drubbing his party faced in Rajasthan in the Lok Sabha polls, including the loss of the CM’s son from Jodhpur. The 2019 Lok Sabha polls, he alluded, were why Gehlot was preferred over him as the chief minister in 2018.

Clearly, there was no love lost between the two leaders even a year after Rahul Gandhi had struck a compromise of sorts between them, asking Pilot to exercise ‘patience’ and let the senior leader take the reins then. Much storm has blown in the desert state since, with things coming to a pass between the two leaders on Thursday as Gehlot termed Pilot a “Gaddar (traitor) who will never be CM”. Calling Gehlot’s charges ‘false and baseless’, Pilot questioned who he was taking advice from. He also recalled earlier instances of Gehlot calling him ‘nakara, nikamma’.

To make matters worse, this came in the middle of the Gujarat elections where Gehlot is in-charge. Gandhi, meanwhile, is on the ‘Bharat Jodo Yatra’ where Pilot has joined him. Congress responded to the war of words, saying the “differences will be resolved”. But this is precisely what the party has not done over the last four years, letting the pot simmer.

The Rajasthan situation seems an eerie repeat of Punjab where the party’s top two leaders have now become more adversarial to each other than even the opposition, like was between Captain Amarinder Singh and Navjot Sidhu.

Things are at such a pass that both Gehlot and Pilot are openly alluding to each other being in cahoots with BJP. As the Gehlot camp terms Pilot ‘another Jyotiraditya Scindia’, the Pilot faction cites PM Narendra Modi’s recent praise of Gehlot to ask if the chief minister was on the way to become another Ghulam Nabi Azad.
THE ROOT DISPUTE

At the heart of the dispute remain deep mistrust and insecurities. Gehlot firmly believes that Pilot is the BJP’s Trojan horse inside the Congress and will leave the party — a charge he jotted down in a hand-written note as speaking points before a meeting with Sonia Gandhi recently. Gehlot said Pilot is the first party president of a Congress state unit who tried to bring down his own government in 2020 at the BJP’s behest. The chief minister added that Pilot failed as he only had a few MLAs with him or he would have done a Jyotiraditya Scindia.

Pilot lost his deputy CM and state president posts as a fall-out of the events in 2020, adding to Gehlot’s disbelief that the former could now be considered his replacement ahead of the state elections or even as the party’s CM face going into the next polls.

The Congress had hoped against hope that Gehlot would make way for Pilot two months ago after he emerged the front-runner to take over as the next Congress president. However, the Grand Old Party was in for a rude shock as Gehlot loyalist MLAs staged a mini-revolt in Jaipur, making the high command beat a hasty retreat.

Pilot’s case is simple too, even though he does not have support of majority MLAs. He says he was sent to the state by the Gandhis in 2014 as the Rajasthan party chief after Congress suffered a wipe-out in the 2013 elections under Gehlot and lost power to Vasundhara Raje.

Pilot says he burnt the midnight oil in Rajasthan for five years to bring his party back to power, only for the CM’s chair to be snatched away from him and denied till date. The Pilot camp believes that the party will lose in Rajasthan if it contests with Gehlot as chief minister or worse, as the next chief ministerial face.

Gehlot was told not to contest for Congress president after the Jaipur revolt in September and further ‘punishment’ seemed on the way as the party promised a ‘decision’ in the next two days. But nothing has happened in the last two months and even the party in-charge of Rajasthan, Ajay Maken, has quit citing the indecision on the issue.

Congress faces a double whammy here as it did take certain decisions in Punjab — replacing Captain Amarinder Singh as CM with Charanjit Singh Channi and later declaring Channi as next CM face ahead of Navjot Singh Sidhu. However, it still lost the elections. Will indecision now cost the Congress dear in the next Rajasthan elections?