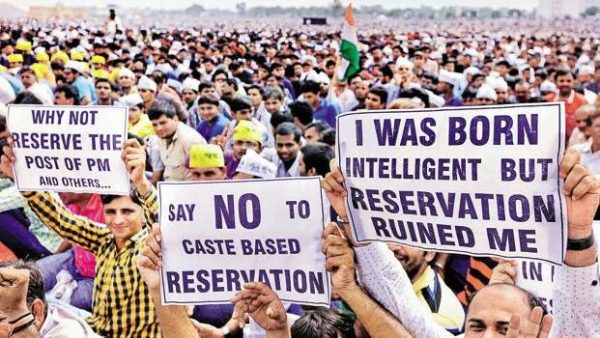 Upper castes have built up narratives saying that quota kills merit and keeps India backward. They have questioned who would be treated by doctors qualified from reserved categories.

The Constitution Bench of the Supreme Court of India has upheld the validity of the 10 per cent quota for the Economically Weaker Sections or EWS in educational institutions and government jobs with a split verdict of 3:2. The introduction of this reservation had been challenged by Janhit Abhiyan, a voluntary organisation formed by social activist Raj Narayan, on these grounds: One, reservation was never envisaged on the sole criterion of economy; two, the EWS quota violates the basic structure of the Constitution since it exceeds the 50 per cent ceiling limit fixed by the SC in M.R. Balaji and Indira Sawhney judgments; three, it is discriminatory on a caste basis since it excludes Scheduled Castes, Scheduled Tribes, and Other Backward Classes.

How the EWS quota harms the interests of SCs, STs, and OBCs has become a bone of contention since it reduces their opportunity to qualify in the open category from 50 per cent to 40 per cent. There is no doubt that the EWS quota reduces opportunities for these groups, and hence, it principally appears to be against their interest. But its introduction has some benefits too that are beyond the Constitution and constitutionalism, and they are providing ammunition against stigmatisation and humiliation in the name of reservation. I discuss these in detail.

Destigmatising reservation and its beneficiaries

Reservation is an affirmative action policy, which has been stigmatised across the world, including in India. Ever since quotas were implemented in the country, anti-reservationists, primarily from ‘upper’ castes, have been consistently stigmatising it. They have been doing this in the name of ‘merit’. This tendency has rapidly grown with the implementation of the quota for OBCs. While using the principle of merit for opposing quota, anti-reservationists have stigmatised even those communities coming under policy preview. Their acts of shoe polishing and cleaning streets while protesting OBC reservation are living examples — as if these works are meant for ‘lower’ castes and do not require any skill, talent, or labour. Historian Uma Chakravarti cites another significant incident in her seminal book Gendering Caste: Through a Feminist Lens where a section of upper-caste girls used a signboard during the 1990 Mandal Comission protests that said they would not ‘find a suitable husband’.

The anti-reservationist upper castes have built up narratives saying that quota kills merit and hence keeps the country backward. They have questioned who would be treated by doctors qualified from reserved categories, conveniently ignoring the fact that upper-caste doctors have settled down in urban and semi-urban localities of India as well as moved abroad after availing publicly funded subsidised education in the country. Their higher education does not guarantee that they would not practice caste-based discrimination and untouchability. In fact, it remains understudied how the notions of purity and pollution could have subconsciously played a role in avoiding postings in rural India besides ‘lesser’ economic opportunities.

With their logic of merit, anti-reservationist upper castes have tried to shift the burden of backwardness of the country onto reservation and communities availing it. All these things have been done with a strategy to induce a sense of public shame so that beneficiaries can be prevented from participating in public debates and discourse in their full capacity. This is evident in the fact that a section of beneficiaries of reservation policy hides their identity in public.

The growing stigmatisation of reservation in India has led to the need to undo it. Political scientist Ajay Gudavarthy meticulously articulated this in his paper Can We De-Stigmatise Reservations in India. He argued for the expansion of reservation policy beyond the criterion of caste, which would be beneficial for these communities since it would enhance their capacity “to appear in public without shame”.

In government offices, SC/ST members frequently report that they are abused with slurs like ‘sarkari damaad’ (son-in-law of the government). Even in elite women’s colleges of Delhi University, students from marginalised sections haven’t been spared. Similar instances were found by the Thorat Committee in its investigation of caste discrimination in the All India Institute of Medical Sciences (AIIMS) in New Delhi. Such abuses have not only led to a decline in the performance of employees and students from these communities but also a large number of suicides in higher education institutions.

The introduction of the EWS quota has provided marginalised sections with some ammunition. I frequently come across viral social media posts where people have used the comparatively low marks of students in EWS when compared to OBC candidates. Upper-caste anti-reservationists have strategically remained silent when EWS quota was implemented to maintain their caste solidarity. This silence has also been called out to expose the hypocrisy of those who have always argued that reservation kills merit. Social media is full of terms such as ‘Sudama Quota’, ‘Daridra Quota’, which have been used by the supporters of SC/ST/OBC reservation to fight everyday humiliation.

Several dominant agrarian castes have been demanding reservation in India. The demands of Jats in Haryana, Patidars in Gujarat, and Marathas in Maharashtra have erupted in massive public violence many times. Muslims have been making separate demands though backward members are covered within the OBC quota. Intellectuals like Omar Khalidi, a staff member at Massachusetts Institute of Technology in the US, have gone up to claim that “the affirmative action plan is not designed to benefit the poor on a purely economic basis”, and hence, such policies are meant for ‘Hinduising’ India. In addition to this, a section of upper castes, in order to advance their prospect of admission to Western universities, have been continuously propagating in the West that economically weaker sections of upper castes have been excluded from admission because of reservation policy. In fact, this point of view has been continuously advanced through the reputed Western magazine The Economist. The EWS quota is going to bust that myth too.

While the Supreme Court has decided the constitutionality of the EWS quota, it has, more importantly, set the context of near consensus within the political class for introducing it. It is this class that represents the will of the people. Now is the time to debate on the positive consequence of the reservation policy without thwarting any negative ones.