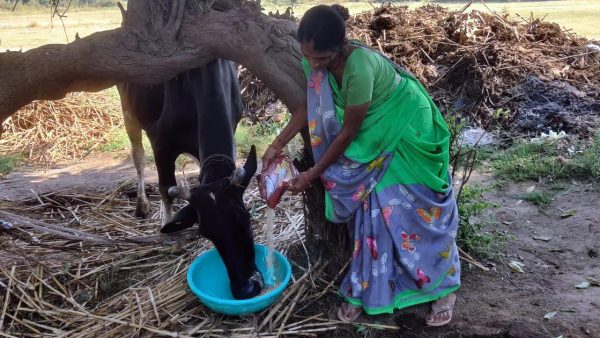 Not fit for children.

When 28-year-old Ekta Chawda was pregnant last year, the local anganwadi in Pamol village, an hour’s ride from Vadodara, gave her three packets containing a soft white mixture every month. Each 1.5kg packet of the mixture, made up of wheat, gram flour, soyabean flour, sugar, oil, rice, and maize, was protein and nutrient-rich.

Chawda would add ghee to the mixture to cook a sweet dish – sheera – or make theplas, both commonly consumed in Gujarat. “I never liked the taste, but I ate it,” she said.

With Chawda’s family engaged in farm labour, there was little money to spend on food while she was pregnant, and the food mixture distributed by the anganwadi filled a vital nutrition gap. Local anganwadi centres, under the state’s women and child development department, provide care and nutrition for children under six years of age, and pregnant and lactating women.

After Chawda’s delivery, the anganwadi began providing a similar packet – called Balshakti – for her six-month-old son. But Chawda’s son, now a year old, spits out any food cooked using the mixture. Chawda said she told the anganwadi worker to stop giving her the food ration packets, but to no avail. “She says take the packet and do whatever you want,” said Chawda.

Chawda now dumps the contents into a neighbour’s cattle feed container. “I tried, [but] my son does not like the taste,” she said.

Several rounds of the National Family Health Survey data have shown that Gujarat’s nutrition levels are worrying, especially among children. Since 2019, the Gujarat government has been handing out these ready-to-cook rations of energy-dense, micronutrient-fortified food to children, teenage girls, and pregnant and lactating mothers.

Gujarat has over 53 lakh beneficiaries under the anganwadis. In 2020-’21, the government provided take-home rations of the food mixture to 38.18 lakh beneficiaries. It also made an annual budgetary provision of Rs 723.4 crore for the take-home rations and hot, cooked meals. It was not clear how much was allocated separately for the food mixture packets.

But, going by ground reports and feedback from anganwadis, children find the nutrient-rich food packets unappetising, posing a challenge for the state.

Sunita Macwan, a health activist with the non-profit Kaira Social Service Society that works on health and women’s issues, said that despite the feedback, the government is intent on continuing with the take-home rations. “So much money is being wasted on procuring it,” she said. “The government knows that women throw away the rations.”

‘At least, cattle are getting healthy’

Daksha Prajapati, an anganwadi worker in Pamol village of Anand district, said she has told her supervisor about the complaints from mothers in her village. “I can do nothing more,” she said. As she watched over children at the anganwadi eat a hot meal of rice and dal without fuss, she added, “Children prefer cooked meals over that packet.”

Reshma Chawda tried using the food mixture to make sheera for her daughter Diksha, but gave up a few days later and fed the contents to her cow. “At least the cattle are getting healthy,” she said.

Madhuben Chawda, who owns a cow and a buffalo in the same village, has stopped buying fodder since several villagers give away the food rations to her cattle. Her granddaughter, now four years old, too prefers hot meals at the anganwadi, like other children in the village.

Rushida Chawda, aged 37, has two children enrolled in the anganwadi. When the anganwadi workers counselled her about the benefits of the fortified food mixture, she made chapatis and sheera for her son. “He ate it initially,” she said. “But his weight did not increase,” she said. Later, he began vomiting the food. Her elder daughter, who is five years old, eats at the anganwadi as well.

KK Nirala, secretary in the state’s women and child development department, said the fortified food packets were meant to supplement a child’s diet.

While India’s national averages for stunting, wasting and underweight children have improved compared to the previous surveys, Gujarat’s numbers have shown little change or worsened.

The decline is particularly noticeable in rural parts of the state as indicated in the table:

A screening exercise by the state government found that up to November 2021, 1.64 lakh of the 21.1 lakh children examined suffered from severe acute malnourishment.

“Malnourishment makes it difficult for a child to fight infection,” according to epidemiologist Dr Pradeep Awate. Wasting leads to low fat storage in the body, which can, in turn, suppress the immune system, increasing a child’s mortality risk. These effects linger well into adulthood too.

Before introducing food mixture rations, the Gujarat government ran a scheme called Bal Bhog, under which dietary supplements were distributed in different forms – as packaged food, then chocolates. The state government also distributed packets of sukhadi (a sweet Gujarati dish), sheera, and upma along with these take-home supplements. For children between three and six years of age, cooked meals would be served hot at anganwadis.

In 2019, with the aim of improving nutrition among children aged under the age of three, the state government struck an agreement with the Gujarat Cooperative Milk Marketing Federation, which runs Amul, to manufacture and distribute the fortified food rations. Under the Gujarat Cooperative Milk Marketing Federation, the district unions of Kaira, Banas and Surat individually set up plants to produce 200 metric tonnes of the fortified food mixture per day.

Now, healthy children receive 3.5 kg of Balshakti packets and milk every month, while malnourished children are given 5-kg packets. Severely malnourished children have to consume 185 grams of this packed food every day. Adolescent girls are provided 4 kg per month of a variant called “Purnashakti”, while pregnant and lactating mothers are given 4 kg per month of “Matrushakti”.

Chirag Khadol, health activist in Kasor, a village in Anand district, where Amul is headquartered, said the local population has different dietary habits: they prefer chapati, dal, rice and vegetables over processed food.

“Anganwadi workers have attempted to counsel women about benefits of the ration and even told them about different recipes,” said Khadol. “But people have refused to switch.” Nirala, secretary in the state’s women and child development department, however, argued that the idea is to not change anyone’s diet, but provide an additional supplement.

Activists in Dahod, Anand, Vadodara and Ahmedabad said they have urged the government to modify the taste of the food mix to improve its consumption or switch to hot, cooked meals. “But there is no attempt to make the ration more suitable for children,” said Renu Khanna, from non-profit Sahaj.

A survey of 750 beneficiaries of the take-home rations scheme conducted from December 2020 to February 2021 found that children disliked the taste of the food rations. The survey was conducted by Krunal C Kamani, assistant professor at Anand Agricultural University, across 24 districts of Gujarat. Twenty-five per cent of respondents said children did not like the flavour of the food rations while 35% complained about poor food distribution. Only 9.6% of the respondents said they were happy with the food mixture rations.

Of the total beneficiaries surveyed, 743 earn less than Rs 2 lakh annually and relied on free rations to sustain their families. The research paper recommended that the state improve the taste of the rations while also making anganwadis more child-friendly and improve access to ration in rural areas.

Secretary Nirala said the government is working on the feedback and will add millets to the packet of take-home rations. “Within Gujarat, people in Saurashtra prefer salty food, in central Gujarat, they prefer sweeter dishes,” said Nirala. “We are trying to create a neutral flavour,” he said, so people could add either salt or sugar to prepare a suitable meal.

Savita Gursingh Baria, a health activist who works in Dahod and Mahisagar district, said traditional and familiar food that matches the dietary patterns of beneficiaries are better. “Hot, cooked meals are best suited,” she said, adding that an anganwadi can monitor the food consumption of beneficiaries. But cooked meals made using traditional recipes may fall short of the required nutrition, say experts. Take-home food rations are convenient for beneficiaries and also reduce the burden on anganwadis to provide cooked meals.

Baria said the government continues with the food mixture rations, claiming it is healthy. “But if children don’t consume it, what is the point?” she said. According to Baria, several adolescent girls who eat food made using the ration mixture continue to have low haemoglobin. “We need a better solution to improve their health.”