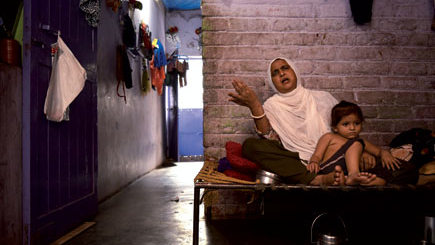 They say time heals all wounds. But in the state of Gujarat, election time rips open the wounds of 2002 and leaves them freshly bleeding.

This election season has seen the BJP rubbing salt on the wounds of the victims of the horrendous riots with impunity.

First, the BJP governments in the state and at the Centre colluded to release the 11 convicts of the Bilkis Bano rape case in 2002. These men were found guilty of gang-raping a pregnant woman and killing, in a single night, nine members of her family, including her three-year-old daughter whose head was smashed with a rock.

After their release, the men were garlanded and offered sweets in the most immoral manner. Widespread outrage over the perversity of the entire episode notwithstanding, the BJP has brazened it out. The rapist-killers continue to roam free and are valorised, while Bilkis Bano lives in fear and frustration over renewed injustice at the hands of the state and the ruling party.

A BJP MLA went on to describe the rape and murder convicts as “sanskari Brahmins”. He has been rewarded with another nomination as the BJP candidate from the Godhra seat in next month’s Gujarat election.

Then comes the most blatant of assaults on the psyche of Muslims by the BJP. The party has named the daughter of a Naroda Patiya massacre convict as a Gujarat election candidate.

Payal Kukrani, the BJP candidate from Naroda, is the daughter of Manoj Kukrani, who was convicted in one of the worst massacres in the history of independent India.

As if that was not bad optics, this man is openly campaigning for his daughter for elections in the same area where he and his gang of rioters committed some of the most horrific crimes against Muslims in 2002.

Ninety-seven people were killed by a rioting mob on February 28, 2002 in Naroda Patiya. The incident was later described as “the largest single case of mass murder” during the riots. Several witnesses said women and girls were gangraped before being killed, and children were burnt alive. Manoj Kukrani was one of 32 convicted in the Naroda Patiya case.

In September 2016, the Gujarat High Court granted bail to Kukrani after his lawyers told the court that he was “totally bedridden and not in a position to carry out his day-to-day activities”, and that his condition was deteriorating day by day.

And here he is, campaigning for his daughter and the BJP, as reported by my colleague Tanushree Pandey.

What is the message that the BJP is sending to the Muslims of Gujarat and across the country? That crimes against them don’t matter. That the criminals will be lionised and rewarded. That Muslims must make peace with the fact that on the BJP’s watch, there is little hope for any lasting justice. Even if the courts deliver delayed justice to the victims of horrendous crimes, the BJP will do all it can to undo it and will not spare a chance to make political capital out of humiliating and targeting Muslims.

What does such glorifying of criminals by the BJP say about its government in Gujarat? That after ruling the state for close to three decades, it still believes the 2002 violence is its biggest showpiece. And the party is doing all it can to jog the electorate’s memory of the bloodbath 20 years ago. It wants the voters to remember and celebrate the riots – and how it put Muslims in their place.

What does it say about the voters of Gujarat? That they will have no qualms celebrating criminals, as long as the victims are Muslims. The men being garlanded today on the streets of Naroda and Dahod, where Bilkis was gangraped, have been convicted of some of the most heinous crimes. How can people be comfortable with such men amongst them? Does hate for Muslims transcend any moral compass?

What do these developments tell us about the BJP’s opponents in Gujarat? AAP is silent on these egregious instances and the Gujarat Congress has made only muted comments.

That’s the BJP’s biggest triumph. It has made majoritarianism so mainstream that even its opponents play it safe by taking the soft Hindutva line rather than a principled or moral stand. They fear losing the votes of the majority. They, too, see the majority community voters through the BJP’s eyes. That all they really care about is the humiliation and ignominy of Muslims. More than any real issues.

It is a frightening glimpse of our polity and how far down the rabbit hole it can get.