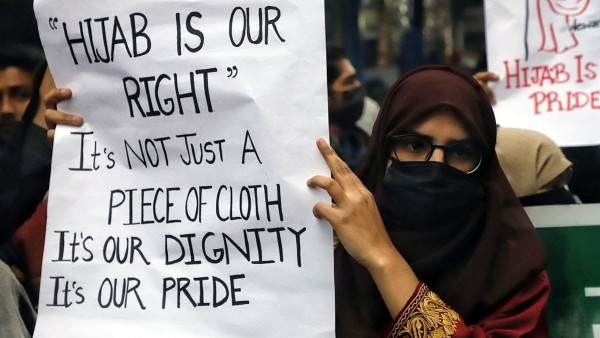 Wearing hijab is not an essential religious practice in Islam and it can't come under the Constitution's Article 25 (Freedom of conscience and free profession, practice and propagation of religion), Advocate General Prabhuling Navadagi argues in the Karnataka High Court.

He said that petitioner students have approached the court not just seeking the permission to wear headscarves, but want to wear hijabs to attend classes as part of their religious right.

Contending that the petitioners can’t press for the right to wear a hijab under Article 25, he said that the provision doesn’t state it as a fundamental right.

Food and dress shouldn’t be considered as essential part, Navadagi said, and went on to quote Dr. B.R. Ambedkar’s statement of not allowing religion into the institutions and how it should be consciously kept out, which could be in the present context of religious symbols.

He also cited imposition of religion on others and noted when the Parliament discussed adoption of secularism, it was argued if is it necessary to have religious rights? The Parliament, at the time of throwing open of temples to all Hindus, stated that social reform must be brought to all religions.

The Advocate General maintained that the question of whether wearing of hijab is an essential religious practice must be settled and then other issues could be addressed. He reiterated that the petitioners simply would not come to the court with a request to permit them to wear headscarves, but seeking they be permitted to wear it as a religious practice.

“If institutions are permitting students with hijab, will the government has any problem?” it asked.

The bench also asked the that the petitioners are seeking to wear same colour headscarf as the uniform, can be treated as part of the uniform? If they are wearing dupattas, can they wear it around their neck?

As he said that complete freedom is being given to the College Development Committees, and as a matter of principle, students are proposed to have secular outlook and can’t display religious symbols, the bench asked whether wearing of cloth around neck is religious?

He said that it is left to the discretion of the institutions, and they would find difficulties in matters of discipline.

A burqa-clad girl in Bihar’s Begusarai district was stopped from making transactions in a nationalised bank, an official said.

Meanwhile, a burqa-clad girl in Bihar’s Begusarai district was stopped from making transactions in a nationalised bank, an official said.

The girl recorded the incident and shared it on social media on Sunday. The incident took place on Saturday when the girl had gone to UCO bank of Mansoor Chowk branch in Begusarai to withdraw money.

As per the video, three to four bank employees asked her to remove the hijab and only then apply for the withdrawal of the money. The girl strongly objected to it and called her parents. They asked the employees to show written notification that Hijab is not allowed inside the bank.

“My daughter and I used to come to the bank every month but no one had ever objected in the past. Why are they doing it now? If any such thing has been implemented in Karnataka, why are they implementing it in Bihar? Do they have any written notification about banning Hijab in banking operations?” her father asks in the video.

The employees also asked them to stop recording the incident which the woman and her family refused.

The video was uploaded on social media and re-tweeted by RJD leader Tejashwi Yadav. While tagging Chief Minister Nitish Kumar, Tejashwi asked: “To what extent can you go to secure your post? I understand that you have mortgaged your ideology, policies, moral responsibility and conscience before BJP but you have taken the oath of the Constitution of the country. Respect the Constitution at least and arrest the alleged employees.”

Meanwhile, UCO bank from its official twitter handle has given a statement on this incident: “Bank respects the religious sentiments of the citizens and does not discriminate its esteemed customers on the basis of caste or religion. Bank is checking the facts on this issue.” (IANS)