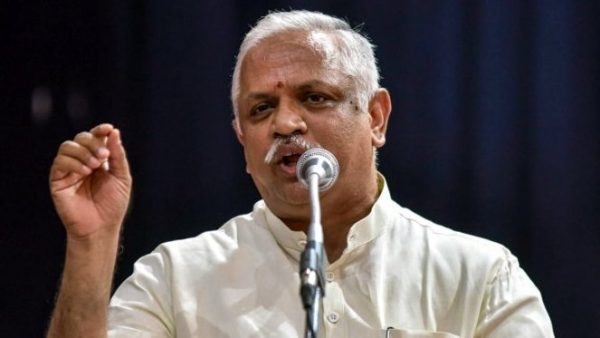 The Special Investigation Team of Telangana police has summoned BJP National General Secretary (Organisation) BL Santhosh, with a notice saying that he could be arrested if he didn’t comply.

In a major development in MLAs poaching case, the Special Investigation Team (SIT) of Telangana Police has summoned Bharatiya Janata Party (BJP) General Secretary (Organisation) BL Santhosh. The SIT has served notice to the BJP leader under Section 41A of the Criminal Procedure Code(CrPC) asking him to appear before it on Monday, November 21. Santhosh has been directed to go to the Police Command and Control Centre in Hyderabad at 10.30 am on Monday. The SIT has stated in the notice that if he fails to appear before it, he will be arrested. The notice sent to the BJP office in Bengaluru’s Malleshwaram asked Santhosh to bring a specific mobile phone without deleting any information, that the accused are believed to have contacted him on. “Failure to attend/comply with the terms of this notice can render you liable for arrest under Section 41-A (3) and (4) of CrPC,” it said.

Santhosh’s name figured in the purported conversation between three alleged BJP agents arrested by the police last month while allegedly trying to lure four MLAs of the Telangana Rashtra Samithi (TRS) to the BJP’s fold with an offer of huge amounts of money. The SIT has already served notices to Kerala doctor Jaggu Swami, Bharath Dharma Jana Sena (BDJS) president Tushar Vellapally and a lawyer and relative of Telangana BJP president Bandi Sanjay Kumar for questioning. All four have been summoned on the same day. They have been asked to appear before SIT for questioning for their alleged links with the three accused arrested in the case last month, sources said.

Jaggu Kottilil alias Jaggu Swami is working at Amrita Institute of Medical Sciences in Kochi while Tushar Vellapally is the son of a Kerala community leader Vellapally Natesan, and the chief of Bharath Dharma Jana Sena (BDJS), an ally of the BJP in Kerala. A team, led by Nalgonda Superintendent of Police Rema Rajeshwari, a member of the SIT, served the notices after its investigation in Kerala over the last five days. The team served notice at Vellapally’s house in Alappuzha. Vellapally was not home.

The name of Vellapally, who had contested the 2019 Lok Sabha election from Wayanad against Congress leader Rahul Gandhi, figured in the purported conversation the three accused had with the TRS MLAs. The notice was pasted at the office and house of Jaggu Swami, who is reported to be absconding. The police team was in Kerala to question him as Ramachandra Bharati, the main accused in the case, reportedly confessed that Jaggu Swami was linked to the cash that was promised to the TRS MLAs as an inducement.

SIT has also served a notice to Bhusarapu Srinivas, a lawyer from Karimnagar, who is said to be a distant relative of the Telangana BJP chief. Srinivas had allegedly funded the flight expenses for Simhayaji, one of the three accused.

Ramachandra Bharati alias Satish Sharma, Simhayaji and Nandakumar were arrested by the Cyberabad police from a farmhouse at Moinabad near Hyderabad on the night of October 26 when they were allegedly trying to lure four MLAs of the TRS with offers of huge amounts of money. Cyberabad police conducted the raid on a tip-off by Pilot Rohith Reddy, one of the MLAs. He alleged that the accused offered Rs 100 crore to him and Rs 50 crore each to three others.

The accused were booked under various sections of the Indian Penal Code (IPC) and the Prevention of Corruption Act. The Telangana High Court on Tuesday rejected the BJP’s plea to hand over the MLAs’ poaching case to the Central Bureau of Investigation (CBI), but made the SIT probing the case independent. The court also ruled that a single judge will monitor the investigation into the case. It asked the SIT to submit a report to the court on November 29 on the progress of the investigation. (IANS)