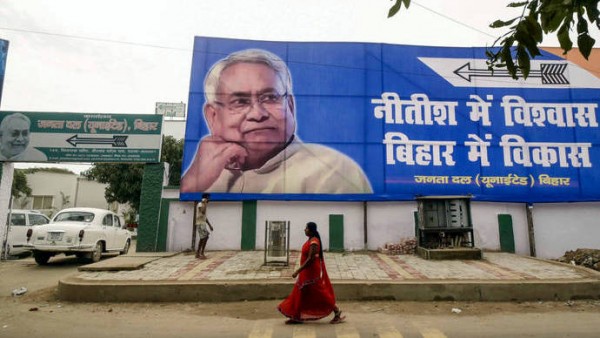 Bihar gears up for elections.

Nitish Kumar, the powerful JD-U leader, has once again parted ways with the BJP-led NDA and resigned as the Chief Minister, joining hands with the Rashtriya Janata Dal (RJD) -- throwing a stunner that not only created a stir in Bihar, but also in the country's political arena.

However, this is not the first time Nitish Kumar chose to board the RJD boat by dumping the NDA ship. In a dramatic turn of events in 2015, he had decided to walk along with Lalu Prasad’s RJD. But the JD-U veteran, in a surprise move in 2017, walked out of the alliance with RJD, and again forged a partnership with the NDA.

The developments of Tuesday have made many question Nitish Kumar’s intent, as to whether he had pre-planned this move after taking oath as the Chief Minister of Bihar for the seventh time in November 2020.

Many have also been left wondering what could have prompted Nitish Kumar to ally with the RJD — the party which does not enjoy a decent reputation in several areas, the most prominent being law and order. In fact, Nitish Kumar’s brand of politics was majorly being driven on the plank of his crusade against RJD’s ‘Jungle Raj’.

According to political analysts, Nitish Kumar had gotten the drift that he would not be able to run the administration on his terms and conditions, and enjoy a free-hand the moment Sushil Kumar Modi — considered a trusted lieutenant of the Bharatiya Janata Party (BJP) — was shown the door and two others — Tarkishore Prasad and Renu Devi — were made Deputy Chief Ministers.

Nitish Kumar, apparently, was also not pleased with the BJP over certain issues, including appointing ministers from its quota.

When the Bihar Cabinet was expanded in July 2021, despite Nitish Kumar’s repeated requests, only one JD-U leader — R.C.P. Singh — was appointed as minister. According to sources, the development made Nitish Kumar upset, and since then the relation between him and Singh — who recently resigned from the JD-U — went downslide.

Sources said Nitish Kumar feels that the BJP, by making R.C.P. Singh a minister, not only took away his trusted aide from him, but also tried to deduce his importance. Upset over this, he did not nominate Singh to Rajya Sabha a year later (in 2022). Also, JD-U accused Singh of being involved in corruption, which compelled the former Union minister to resign from the party.

The heated argument that took place in Bihar Assembly in March this year between Nitish Kumar and Speaker Vijay Sinha (appointed from BJP quota) had also raised some points of concern. In fact, Nitish Kumar also accused Sinha of violating Constitutional norms.

The soft buzz in the JD-U hinted towards “BJP’s repeated attempts to humiliate Nitish Kumar”. In fact, since that episode, Nitish Kumar began maintaining a distance from ‘Delhi’.

The JD-U has claimed that the BJP tried to create cracks among the party legislators with the help of R.C.P. Singh.

Nitish Kumar, having witnessed the Jyotiradtiya Scindia episode in Madhya Pradesh and the Eknath Shinde saga in Maharashtra, got alarmed about the “possibilities of a sabotage by the BJP”, sources said.

Meanwhile, it also needs to be underlined that the BJP never tried to hurt Nitish Kumar’s prospects. Despite the exchange of words between JD-U and BJP leaders that remained confined just within Bihar, the senior leaders of the saffron party, including its President J.P. Nadda and Home Minister Amit Shah, have maintained that Nitish Kumar is the leader of NDA, and they would contest the 2024 Lok Sabha polls and 2025 Assembly elections together.

The alliance, however, witnessed an abrupt end on Tuesday. (IANS)