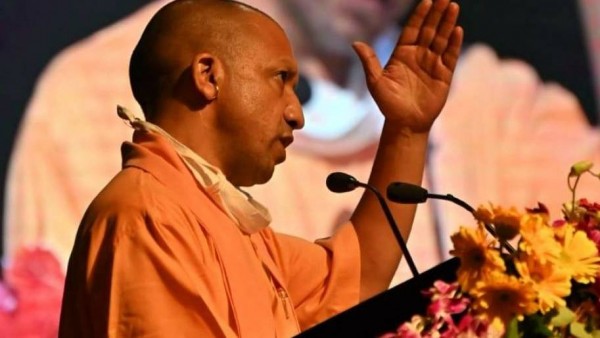 Yogi sets the tone for his re-election.

As the countdown to the Uttar Pradesh Assembly elections due early next year begins, issues like governance and development are expectedly taking a back seat and it is 'Abba Jaan' and Taliban that are emerging as the latest poll narrative in Uttar Pradesh.

State Chief Minister Yogi Adityanath on Sunday said that prior to 2017, “those who say ‘Abba Jaan’ used to devour the free ration sent for the poor and cornered government jobs meant for the poor by indulging in corruption.”

The speech had the desired impact and non-BJP political parties promptly objected to the use of ‘Abba Jaan’ — an endearment for father — for political gains.

Though the chief minister did not name any particular party, it was clear that he was referring to the Samajwadi Party since he had earlier referred to Samajwadi patriarch Mulayam Singh Yadav as ‘Abba Jaan’ in a TV programme.

The chief minister also said that leaders like Akhilesh Yadav earlier did not visit temples for the fear of offending their Muslim vote-bank.

Taliban was added to the narrative after Samajwadi MP Shafiqur-Rehman Barq termed Taliban as ‘freedom fighters’.

The BJP leaders have been referring to his remarks to consolidate its Hindu vote bank and are using Taliban to underline the SP’s affinity for ‘Abba Jaan’ (read Muslim).

The result of this developing situation is that key issues like development have been put on the backburner and almost all political leaders are now bending backwards to establish their Hindu credentials-much to the glee of the BJP leaders.

Bahujan Samaj Party (BSP) MP Satish Mishra was the first one to visit Ayodhya and claim that the grand temple would be completed in the Mayawati regime.

When Mayawati addressed her party meeting in Lucknow recently, she was greeted with chants of ‘Jai Shri Ram’ — something unheard of in BSP till now. She was even presented with a ‘trishul’ on stage.

“We have forced these leaders to rush to temples. It was the Congress that had rejected the existence of Lord Ram. The SP had fired at Ram Sewaks. Why are they now trying to project a Hindu-friendly image?” said state BJP president Swatantra Dev Singh.

The BJP is clearly setting the tone for the next elections using the issue of national security on the Taliban issue and putting non-BJP parties in the dock over the Muslim appeasement.

The content being shared on party-run social media handles and groups on WhatsApp, show that around one-fourth of the posts in the last two weeks were Taliban related referring to Prime Minister Narendra Modi as a “strong personality” and projecting Chief Minister Yogi Adityanath as a strong Hindutva brand against these forces.

“It is unfortunate that the BJP is trying to veer the election narrative on communal lines. We have to stand up against it or else they will succeed in their designs. The BJP does not want people to talk about unemployment, inflation and Covid mismanagement,” said Congress leader Acharya Pramod Krishnam.

On the other hand, SP spokesperson Juhie Singh said that the BJP had always diverted the attention of the people from the core issues of the state. The situation during Covid-19, inflation, unemployment, and social injustice has never been the party’s priority, she said.

Meanwhile, a youth in Bihar’s Muzaffarpur has filed a petition in the district court against Yogi Adityanath for his recent “Abba Jaan” remarks at a public meeting in Kushinagar.

The complainant Tammannah Hashmi, a native of Ahiyapur locality in Muzaffarpur, filed the complaint on Monday alleging that Yogi Adityanath, who is occupying a constitutional post, has targeted a particular community to polarise voters ahead of the upcoming Uttar Pradesh Assembly election.

Yogi publicly said the people who say “Abba Jaan” used to eat the ration of poor people during the previous governments in Uttar Pradesh. Now such a practice has been stopped by his government.

“A person who is sitting on the post of Chief Minister has made derogatory remarks against a particular community. Such an act creates a division of the country. It is nothing but an attempt to target a community to garner votes,” Hashmi said.

“I have filed a petition in the court of Chief Judicial Magistrate in the Muzaffarpur district court. The next hearing of the case is scheduled on September 21,” the complainant added. (IANS)