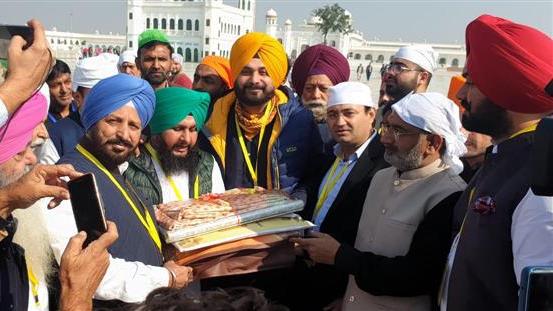 Punjab Congress chief Navjot Singh Sidhu once again courts controversy by calling Pakistan Prime Minister Imran Khan his 'elder brother'. This is a repeat of 2018 when he visited Pakistan for the swearing-in ceremony of the latter and hugged the army chief there.

Sidhu made the assertion of “bada bhai” (elder brother) while interacting with the CEO of the Kartarpur project in Pakistan.

He was in Kartarpur along with several Punjab cabinet ministers to pay obeisance in Kartarpur Sahib Gurdwara.

Sidhu also said he has lots of love for the Pakistan Prime Minister.

“Is it any surprise that the Gandhi siblings chose a Pakistan loving Sidhu over veteran Amarinder Singh?” asked Malviya.

In 2018, Sidhu raked a controversy when he hugged Pakistan Army chief General Bajwa during his visit to Pakistan for Imran Khan’s oath-taking ceremony.

After returning from Kartarpur Sahib Gurdwara, Sidhu demanded opening of the corridor for cross-border trade.

“I request that if you want to change Punjab’s life, we should open the borders. Why should we go through Mundra Port, a total of 2,100-km? Why not from here (Kartarpur corridor), where it’s only 21-km (to Pakistan),” he told the media.

Responding to the controversy over Sidhu’s calling Khan his “bada bhai”, Punjab minister Pargat Singh, who was accompanying Sidhu during his visit to Kartarpur Sahib Gurdwara, said: “When PM Modi goes (to Pakistan) he is a “Desh Premi”, when Sidhu goes, he is “Desh Drohi”. Can’t I call you a brother? We follow Guru Nanak Dev’s philosophy.”

“Imran Khan may be anybody’s elder brother but for India he is that cat’s paw of Pakistan deep state ISI-military combine that drones arms and narcotics into Punjab and sends terrorists on a daily basis across LOC in J&K. Have we forgotten martyrdom of our soldiers in Poonch so soon?” Tewari asked in a tweet.

In 2018, Punjab Chief Minister Amarinder Singh had said his Cabinet minister Sidhu’s hug to Pakistan Army chief Qamar Javed Bajwa in Islamabad was “not a nice gesture and was completely avoidable”.

Sidhu should have avoided indulging in such a gesture when Indian soldiers are getting killed every day on the borders, the Chief Minister had said.

“After all, it is the Army chief who gives orders to kill, with soldiers merely following the order,” the Chief Minister had added.

Hitting out at Navjot Singh Sidhu, cricketer turned politician Gautam Gambhir asked Sidhu to send his son or daughter to the border before calling the head of a terrorist state as big brother.

In a tweet, BJP Lok Sabha member from East Delhi, Gambhir said, “Send your son or daughter to the border and then call a terrorist state head your big brother! #Disgusting #Spineless.”

Later, Gambhir asked Sidhu to remember that Pakistani terrorists killed more than 40 civilians and jawans in Kashmir in the last one month.

“Does Sidhu remember that Pakistani terrorists killed more than 40 of our civilians and jawans in Kashmir in the last one month. We are fighting against terrorism for 70 years with Pakistan. Shame on him. Send your family, sons and daughters to the border to fight and then you will understand the intentions of Pakistan. What can be more shameful than calling the Prime Minister of a terrorist country a big brother,” Gambhir said.