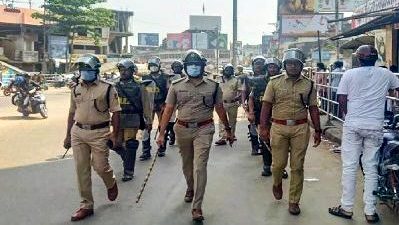 Karnataka Home Minister Araga Jnanendra has stated that the police have arrested three persons in connection with the killing of Harsha (26), a Bajrang Dal activist who was stabbed to death in Shivamogga on Sunday night. The police department is on high alert throughout the state. Fearing large-scale violence, the Shivamogga city has been turned into a police fortress.

Meanwhile, the situation in Shivamogga continues to be volatile with protesters torching a police bus on Monday.

The procession march organised for Harsha turned violent as incidents of stone pelting, and torching of vehicles were reported from Shivamogga, forcing the police to use tear gas and lathi charge against the protesters.

Meanwhile, the Bajrang Dal has called for a state-wide bandh on February 23 condemning the killing of one of its activists.

The police have arrested a person named Kasif in connection with the murder. Based on the information provided by him, two other accused have been arrested from Bengaluru.

After committing the murder, the accused came to Bengaluru while Kasif stayed back to avoid suspicion, the police said.

The accused have told the police that a gang of five people had killed Harsha and the police have launched a hunt to arrest the two absconding accused.

Jnanendra said that there no decision has been taken as such to impose ban on any organisation.

“We will see what can be done in this regard. I am not in a position to share any information on the investigation,” he said.

“The mother of the deceased has asked me to punish those responsible for the killing of her son. It will prevent other children from getting killed,” Jnanendra added.

Meanwhile, Minister for Rural Development and Panchayat Raj, K.S. Eshwarappa, said that this was an act of outsiders and he would seek an investigation by the National Intelligence Agency (NIA) into the matter.

Prohibitory orders have been clamped and a holiday has been announced on Monday for schools and colleges in Shivamogga district of Karnataka following the murder of 23-year-old office-bearer of the Bajarang Dal in the communally sensitive city.

The police department is on high alert throughout the state after an incident of violence were reported.

Fearing large-scale violence, the Shivamogga city has been turned into a police fortress.

Harsha was a tailor and held the position of ‘Prakanda Sahakaryadarshi’ (coordinator) in the district.

The miscreants, who came in a car, had chased him and attacked him with lethal weapons and then escaped from the spot. Though Harsha was shifted to the Meggan hospital, he succumbed to injuries. Harsha was actively involved in Bajrang Dal and VHP activities. He used to be at the forefront during Ganesh festivities and visarjan ceremony. Tense situation prevailed immediately after the incident.

Harsha had allegedly put up a post abusing another religion and a complaint had been lodged against him in the Doddapet police station. He was getting threatening calls.

After the murder, thousands of Hindu activists gathered near the Meggan hospital and the police had tough time to handle the situation. Incidents of stone pelting reported from Sigehatti area in the district, DIP (East) Tyagarajan and Superintendent of Police (SP) Lakshmi Prasad rushed to the spot to control the situation.

Additional forces have been called to avoid any untoward incidents in the district and police have launched a hunt for the miscreants. Three bikes and one goods vehicle were torched in Sigehatti in Shivamogga. The post-mortem will be conducted on Monday morning and the body will be handed over to the family afterwards. Elaborate security arrangements have been taken up to maintain law and order and peace.

Home Minister Araga Jnanendra said on Monday, “The 23-year-old youth has been brutally murdered. I visited Shivamogga and I have also met his family. I have assured his parents and sister that I can’t bring back the dead person, but won’t spare the killers. The action will be initiated against them.”

“The hijab issue has nothing to do with this incident and it has happened for different reasons. Shivamogga is a sensitive city. The incident has taken place on the main road and the police are on high alert. We have clues, shortly they will be arrested. I appeal to the people to maintain calm. All measures have been taken, people should not get provoked. The government will give justice to the deceased person. Special teams have been formed to nab the murderers, shortly we will give updates on it,” Araga Jnanendra explained.

National General Secretary of the BJP and MLA C.T. Ravi stoked a controversy by saying that “intolerance is present in the community since the birth of Islam”.

Speaking to reporters on the murder of a Bajrang Dal activist in Shivamogga, he maintained that there is “no connection between tolerance and Islam”.

“Islam has taken birth on the premise of expansion. They cannot agree to another opinion or be tolerant of other people. There is no room for questioning and liberty. The community has to accept the brutal ways, there is no other way. May be the scholars of Islam, if they do serious thinking, the truth in this regard will come out,” Ravi said.

He dubbed the murder a premeditated act and demanded that action should be initiated no matter who is involved in it.

Chief Minister Basavaraj Bommai said, “Harsha, who was killed brutally on Sunday night, was a worker of our organisation. We have got many clues and arrests would be made soon. I appeal to people to maintain peace,” he said.

Former Chief Minister B.S. Yediyurappa stated that the murder of the Bajrang Dal activist is a condemnable act and the culprits should be arrested soon. “When such elements are arrested and punished, these kinds of incidents of goondagiri and murder will stop,” he said.

Union Minister for Parliamentary Affairs and Mining Pralhad Joshi maintained that such incidents have taken place earlier also in Shivamogga. “The government should consider the incident seriously and arrest the accused soon. One murder case can’t be dubbed as the failure of the government,” he asserted.

Opposition leader Siddaramaiah demanded capital punishment for the murderers of the Bajrang Dal activist. “First find the killers, whoever they may be, they should be sent to the gallows.”

“Home Minister Araga Jnanendra and Minister for Rural Development and Panchayat Raj K.S. Eshwarappa belong to Shivamogga district and they have failed as ministers. I won’t ask for their resignations as they are thick skinned,” Siddaramaiah added.

D.K. Shivakumar, State Congress President, slammed Eshwarappa over his alleged ‘saffron flag at the Red Fort’ remark and stated, “Eshwarappa will blame me for everything. He has already put the state on fire by his statements, let him investigate my role.”

“We are also pained by the murder. Our party condemns the act of murder. We are getting inputs that the murder has taken place for personal reasons. Let them investigate,” Shivakumar added.

BJP MLC Ravikumar stated that amid the hijab row, a Hindu youth had been hacked to death. He claimed that during the Siddaramnaiah led Congress rule, 18 Hindus were killed. “The government should cut the roots of these terror elements,” he demanded.

Sriram Sena Founder Pramod Muthalik has claimed that the killers have been trained in Kerala. “Earlier too, they had attempted to assault Harsha many times and the deceased had filed police complaints in this regard.”

“CFI, PFI and SDPI must be banned, what is the government waiting for? There have been many incidents of Hindu activists being killed in Shivamogga,” Muthalik asserted.

“These elements must be kept in check. If they can commit such a crime in a district from where Home Minister Araga Janendra, Minister Eshwarappa and former Chief Minister B.S. Yediyurappa hail from, it is a total collapse of the system. The community members must be careful. This is not Pakistan or Afghanistan to take out a aword and do what you want. There is law and constitution. They must seek remedies legally to their problems. They can’t play out their things here,” Muthalik warned.

Meanwhile, the body of Harsha, who was hacked to death, was handed over to his family. Despite prohibitory orders thousands of Hindu activists took out a procession, during which incidents of stone pelting, shops’ and vehicles’ torching were reported.

The family sources said that the final rites would be conducted according to Maratha traditions.

Police sources stated that they have arrested two persons in connection with the murder.

Karnataka BJP Minister for Panchayat Raj and Rural Development, K.S. Eshwarappa on Monday while reacting to the murder of a Hindu activist in Shivamogga district, said that it was an act carried out by some goons belonging to a particular community and the statements by the Congress have encouraged the attacks. (IANS)