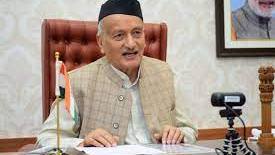 Gaikwad, who represents the Buldhana Assembly constituency, claimed that Koshyari had made statements about the founder of the Maratha Empire and stoked controversy in the past as well.

“The governor should understand that the ideals of Chhatrapati Shivaji Maharaj never age and he cannot be compared to any other great person in the world. My request to BJP leaders at the Centre is that a person who does not know the history of the state and how it functions, be sent somewhere else,” the MLA said.

Gaikwad is an MLA of the Balasahebanchi Shiv Sena faction of the party led by Shinde who helms the government in alliance with the Bharatiya Janata Party (BJP).

Koshyari had, on Saturday, said Chhatrapati Shivaji Maharaj was an icon of “olden days” and referred to Babasaheb Ambedkar and Union minister Nitin Gadkari while talking about “icons” in the state, drawing criticism from the NCP and Uddhav Thackeray-led Shiv Sena faction.

The governor made the remarks after conferring D.Litt degrees on senior BJP leader Gadkari and NCP president Sharad Pawar at an event held in Aurangabad.