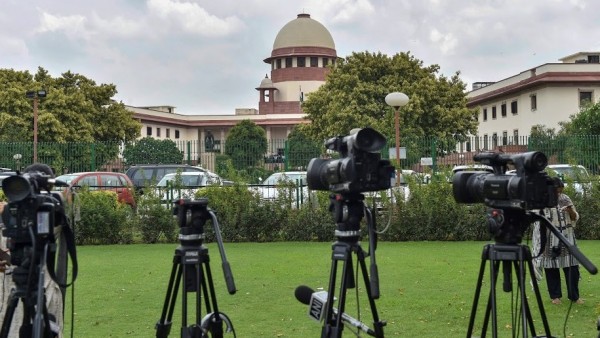 The Supreme Court has held the "role of anchor" as "very important" while coming down on TV channels over hate speech. It also asked why the government is "remaining a mute spectator".

“These speeches on mainstream media or social media are unregulated. It’s (the anchors’) duty to see that hate speech doesn’t continue the moment someone does. Freedom of press is important… Ours is not as free as US but we should know where to draw a line,” Justice KM Joseph observed at the hearing of a batch of petitions filed since last year.

“Hate speech is layered… Like killing someone, you can do it in multiple ways, slowly or otherwise. They keep us hooked based on certain convictions,” said the court, expanding on why hate speech interests viewers.

“Government should not take an adversarial stand but assist the court,” it further observed, remarking, “Is this a trivial issue?”

The matter will next be heard on November 23, by when the court wants the central government to clarify if it intends to act on Law Commission recommendations on curbing hate speech.
•
The Law Commission, upon a prompt by the Supreme Court, had submitted a report in 2017 recommending specific laws. “Hate speech has not been defined in any law in India. However, legal provisions in certain legislations prohibit select forms of speech as an exception to freedom of speech,” the commission noted. It shared a draft legislation as well, suggesting “insertion of new sections 153C (prohibiting incitement to hatred) and 505A (causing fear, alarm, or provocation of violence in certain cases)”.

TV shows — late-evening debates, in particular — often go viral as clips on social media. Internet companies, thus, have also been under fire for not doing enough to curb hate speech.

Earlier this month, Google and Meta — firms that run YouTube and Facebook, among other platforms — said they’d take fresh steps to combat online extremism “by removing more violent content and promoting media literacy with young users”, at a summit in the US on fighting hate-fuelled violence.

The Supreme Court observed that television news channels often escape without any punishment for giving space to hate speech, reported Bar and Bench.

“We cannot give hate any air,” Justice KM Joseph said.

Justices Joseph and Hrishikesh Roy were hearing a batch of pleas seeking steps to be taken against hate speech incidents. In July, the court had directed the Centre to submit a report on how states have complied with directions issued by the Supreme Court in its Shakti Vahini and Tehseen Poonawalla verdicts.

The Shakti Vahini ruling was related to caste killings, while the Tehseen Poonawalla judgement was on lynchings in the country. The court had said that these verdicts had universal application for preventing violence in the context of society, culture, and religion, according to Supreme Court Observer.

At Wednesday’s hearing, the court noted that the absence of a regulatory mechanism for television news was a problem as far as curbing hate speech is concerned, reported Live Law.

“I believe that all channel[s] are fined heavily in England,” Joseph said. “We don’t have that system here. Law means sanction, sanctions must be effected… The problem is that they are not being dealt with firmly.”

He added that news anchors share their own views on TV debates and panelists who have different perspectives on the topic are not allowed to express themselves.

“In doing that you are bringing hate and your TRP [Target rating point] is going up,” Joseph said.

The judge noted it was the duty of the anchors to ensure that the panelists on their show do not engage in provocative speeches.

“The role of anchor is critical,” he said. “It is their duty to see that hate speech doesn’t happen.”

The court also sought to know from the Centre why it is silent on the matter.

“Government should not take an adversarial stand but assist the court,” the bench said, reported NDTV. “Is this a trivial issue?”

The court said that politicians benefit the most from hate speech on news channels that give them a platform. Senior Advocate Sanjay Hegde, appearing for the petitioners, agreed with the court’s views.

“Channels and politicians feed on such speech,” Hegde said. “Channels get money. They keep ten people in debates.”

Meanwhile, Solicitor General KM Nataraj told the court that 14 states have submitted their responses with on the court’s July order. The court also directed the central government to file a counter-affidavit on inputs received from the state and posted matter for hearing on November 23.