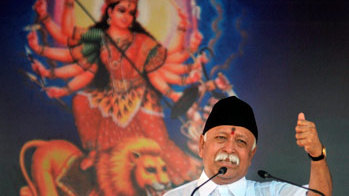 In a significant development, a closed-door meeting between Rashtriya Swayamsevak Sangh (RSS) Sarsanghchalak Mohan Bhagwat and a group of 'eminent' Muslim personalities took place recently at the RSS headquarters at Keshav Kunj in Delhi's Jhandewalan.

What Transpired at the Meeting?

During the meeting, which lasted for over an hour, a wide range of issues was discussed, including the Gyanvapi dispute, hate crimes, and population control.

One of the members of the group, who did not wish to be named, said that the aim of the visit was to “highlight issues pertaining to the Muslim community.”

“We brought up concerns of the Muslim community and also asked them what their (RSS’) issues with Muslims were,” the member said.

A person who attended the meeting at Keshav Kunj

The member said that the group “did not want any media attention around the visit” and that their “initiative should not be misunderstood.”

“We are concerned about what is happening (in the country) and that is why we went for this meeting,” the member said.

According to an individual present at the meeting, Mohan Bhagwat also put forth his views on various issues.

The RSS chief reminded the group of his remark: “Why look for a Shivling in every mosque?” He said that this should have been taken forward by Muslims to bridge the divide between them and the RSS.

During the meeting, it was asserted by the RSS side that this was an “ice-breaker,” and that a bigger meeting with “Muslim intellectuals” would be organised later.

The Quint reached out to several people who attended the meeting, both from the RSS side and the Muslim side. We received responses from two of them, both of whom did not want to be named. Their responses are part of the story. Many others did not respond. We will update the story as and when we receive more responses.