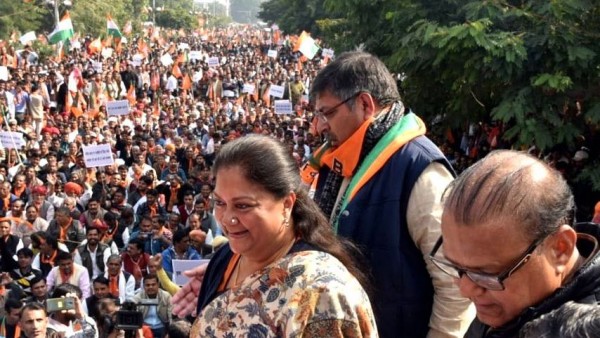 A day before the start of the monsoon session of the Rajasthan Assembly, a letter by Kailash Meghwal, former Speaker, known to be a close aide of Vasundhara Raje, has intensified the factional feud in the politics of Mewar as Meghwal raised a demand for the removal of Leader of Opposition, Gulab Chand Kataria from the post.

The monsoon session of Rajasthan Assembly will start from September 9 and a day before it, Meghwal wrote to BJP state president Satish Poonia demanding removal of Kataria and has asked to bring a motion of condemnation against Kataria in the house.

Meghwal has also written to BJP president J.P. Nadda and has clarified why he is raising the demand. In his letter, he said that Kataria’s comments on Maharana Pratap and Lord Ram have damaged BJP vote bank in the last three bypolls and hence the letter.

He also made several serious allegations against Kataria.

Meghwal and Kataria are known to be political rivals in Rajasthan since the time of former CM Bhaironsingh Shekhawat.

Meanwhile, Kataria issued a statement after the letter went viral and said, “I am ready to accept any decision taken by the party leaders.”

Two bypolls in Rajasthan will be announced soon, in Mewar region, Vallabhnagar and Dhariyawad seat.

Sources said, BJP has plans to field Janata Sena’s convener Randheer Singh Bhindar’s wife in the elections, however, Kataria is not ready for the same.

Bhindar, with his wife also met former CM Vasundhara Raje in Delhi, which became a talking point in Rajasthan.