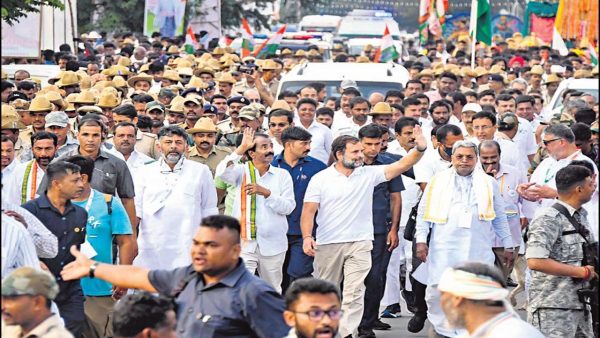 A change of image.

It goes without saying that the acid test of Rahul’s yatra will lie in winning elections. But, curiously, he has tried to delink the yatra from electoral gains, not to appear power hungry —but this makes little sense. A political party is nothing if it cannot win elections and deliver on its promises.

After 19 years of being an unsuccessful politician, Rahul Gandhi, dubbed as the “Pappu” of Indian politics, is beginning to be viewed differently as he walks the dusty bylanes from Kanyakumari to Kashmir on his Bharat Jodo Yatra.

I went to see the yatra in Maharashtra and most of the people I talked to, driving 250 km from Aurangabad to Akola, and later following the yatra in Buldhana district, had, to my surprise, a positive word to say about the yatra. These were the aam aadmi and the aam aurat: a retired teacher, a fruit seller, a housewife, a cobbler, most of them in small towns and wayside villages. They all expressed a similar sentiment: “Paidal chalkar abhi tak humare paas koi nahin aaya hai. Humaen pasand aa raha hai.”(Nobody has come to us on foot like this and we like it.)

A polio-hit retired government servant, 74, came from Nagpur with his son and daughter-in-law—old Congressis — to be part of the yatra for a few hours “to encourage Rahul”. An assistant professor from Amravati joined the yatra in Shegaon and said the time had now come “to work at the ground level because the opposition is blanked out.”
Rahul talked about “berozgari, mehngai and nafrat,” (unemployment, inflation, hate) as he has done in the past, but it is resonating with many more today. With growing economic distress, some say they identify more with what Rahul “had been saying all along”.

It is not so much Rahul Gandhi who has changed — as his comments on Savarkar illustrated; he had criticised in Maharashtra someone who is seen as an icon in the state.

Nor do Rahul’s speeches set the house on fire. In a way, they are reminiscent of Rajiv Gandhi in the early years. In his campaign speeches in the 1983 state elections in Andhra Pradesh and Karnataka — which the Congress lost — Rajiv used to painstakingly explain the value of hard work and abstract concepts of political freedom to puzzled audiences. In his speech at Shegaon, Rahul, too, dwelt philosophically, and at length, on the need to shed fear, and the linkages it had with hatred and violence.

Significantly, it is the people’s perception of Rahul that is undergoing a change. There is only one reason for it, and person after person mentioned it. Rahul Gandhi had come to them on foot, walking 25 km a day. He need not have undertaken the yatra; after all, he is from a “shahi gharana”, they said. And having embarked on a mammoth journey of 3500 km, he had not run away — but stayed the course. It is this which has caught the imagination of a section of the people.

Senior Congress leaders say he is like a “man possessed”, determined to complete the yatra. Given his interest in martial arts over the years, and the daily fitness regimen he reportedly follows, Rahul walks so fast that if you blink, he is gone.

As he walks, he is cordoned off by a rope held by a string of policemen to prevent people from entering the walking enclosure. He has two planned “sitting interactions” with individuals or groups and three daily walking “interactions”, all cleared by the party (and they do not allow media persons near him). It is not as if those waiting by the wayside get a chance to exchange a word with him — or he with them.

The day I saw him, he walked with Tushar Gandhi, Mahatma Gandhi’s grandson, signifying the coming together, once again, of the Gandhi and Nehru-Gandhi families for uniting India.

And yet the yatra is rebranding Rahul Gandhi. It is also bestowing on him a legitimacy that was earlier missing. Two years ago, the dissenting group of G-23 in the Congress had questioned his leadership — and his behind-the-scenes decision-making without accountability. Today, without being the president of the party, he is emerging as the unquestioned leader of the Congress.

The curiosity about the yatra, and the visible response to it, has perked up the Congress cadre. It was after 10 years that the Congress organised a meeting in Maharashtra as large as the one in Shegaon, with 150 Congress leaders on the dais, and people pouring in from neighbouring districts and local police putting the estimates at 2-3 lakh jampacked in the 22-acre ground.

These meetings will be no more than an exercise in event management unless followed up with an action plan — and painstaking, hard work behind the lights, which the Congress has shown little appetite for. The BJP’s winning streak combines Narendra Modi’s appeal with Amit Shah’s organisational prowess.

It goes without saying that the acid test of Rahul’s yatra will lie in winning elections. But, curiously, he has tried to delink the yatra from electoral gains, not to appear power hungry —but this makes little sense. A political party is nothing if it cannot win elections and deliver on its promises.

And this is not only about winning 2024 two years away. Nor about the elections due in Maharashtra the same year. All eyes will now be on the imminent 26 municipal corporation polls, including the BMC, that are due in Maharashtra. How will the Congress fare, for instance, in the local polls in Nanded, where Rahul walked for many days and is supposed to have made an impact? Or, in the four other districts of Maharashtra the yatra touched? How does the Congress encash the interest the yatra has rekindled in the party?

If the Congress loses the Gujarat elections, which it seems to have given up on, and does not manage to get Himachal Pradesh in its bag, Rahul’s yatra can also lose steam. If the party wins Himachal – which even if it has little to do with Rahul or Bharat Jodo — it will give a further impetus to the yatra.

Now that the yatra has strengthened his position, Rahul Gandhi will be watched for how he handles the latest crisis in Rajasthan, with Chief Minister Ashok Gehlot going ballistic against his younger colleague Sachin Pilot, calling him a “gaddar” (traitor). It is a pre-emptive strike by Gehlot to prevent Pilot from becoming the CM. By vehemently declaring that Pilot will not become CM, the normally measured CM has virtually threatened a split if the party high command replaces him with Pilot.

Rahul Gandhi has to figure out how he redeems his word to Pilot, signals to younger leaders they will be rewarded if they work hard and deliver, weakens the anti-incumbency of four years by projecting a new face in the state like Pilot — and ensure that the Congress government does not fall in Rajasthan.

Whatever be the outcome of the Bharat Jodo yatra, Rahul Gandhi has certainly set a new benchmark for political action — that leaders must go back to the people and listen to them. And even in a 24 X 7 image-rich politics, powered by the videoclip, the challenge is the effort they put in when the camera is off.