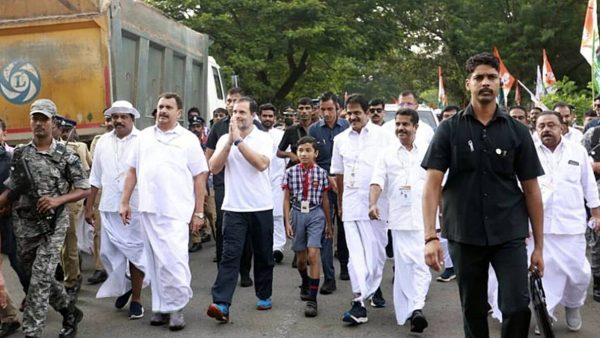 Congress leader Rahul Gandhi is scheduled to return to the national capital on Thursday, ahead of the commencement of nominations for the post of national president of the party, according to sources.

Rahul Gandhi and the party’s General Secretary Priyanka Gandhi Vadra will then resume the Bharat Jodo Yatra on September 24.

As per an official statement, the nominations for filing the candidature for the party’s topmost post will continue from September 24 (Saturday) to September 30 and the final list of candidates will be released at 5 pm on October 8.

The Congress President election will be conducted on October 17 at all PCC and the results shall be announced on October 19, immediately after the counting of votes.

Earlier on Tuesday, the Congress sources had informed that Rahul Gandhi is unlikely to contest the party’s presidential elections and said that he will not come to Delhi leaving the party’s Bharat Jodo Yatra in between.

Meanwhile, party interim chief Sonia Gandhi is learned to have told Rajasthan Chief Minister Ashok Gehlot that the election for party chief will be “free and fair” and the Gandhis will not endorse any name. The election for the president of Congress is ‘open for all’, sources said quoting Sonia Gandhi.

So far, CM Ashok Gehlot and Congress leader Shashi Tharoor have expressed their willingness to contest for the party’s topmost position.

However, party leader Digvijay Singh has arrived in Delhi today and is likely to meet Sonia Gandhi ahead of the organizational polls in the party.