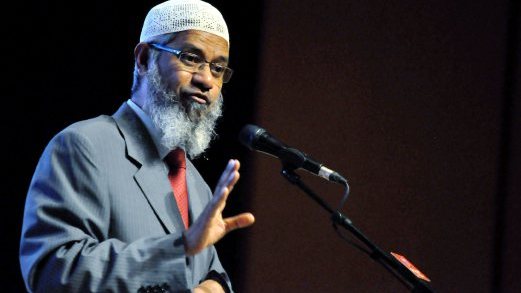 Qatar has invited Zakir Naik, a controversial Indian Islamic preacher who is banned in India, to give religious sermons at the FIFA World Cup 2022. Naik, who faces charges of money laundering and hate speech in India, has been living in exile in Malaysia since 2017, as a runaway fugitive.

“Preacher Sheikh Zakir Naik is present in Qatar during the World Cup and will give many religious lectures throughout the tournament.” tweeted Faisal Alhajri, a presenter at the Qatari state-owned sports channel Alkass.

Country’s media presented and film Zain Khan also confirmed Naik’s presence in Qatar as an invited dignitary, and tweeted, “One of the most popular Islamic Scholars of our time Dr Zakir Naik has reached #Qatar for the #FIFAWorldCup.”

India outlawed Naik’s Islamic Research Foundation (IRF) late in 2016, on the charges of encouraging and assisting the group’s followers in “promoting or attempting to promote feelings of enmity, hatred, or ill-will between different religious communities and groups.” In March this year, the Ministry of Home Affairs (MHA) declared IRF an unlawful association and outlawed it for five years.

Naik, who shot to fame during the 1990s over his activities of da’wah (an act of inviting or calling people to embrace Islam) through IRF, is also the founder of the ‘comparative religion’ Peace TV. The channel reportedly has a reach of over 100 million viewers, many of whom regard him as an exponent of the Salafi (a reform moment within the Sunni community) ideology.

To evade the law, Naik relocated to Malaysia. Even though he has permanent residency in Malaysia, the country also banned Naik from giving speeches in the interests of “national security” in 2020.