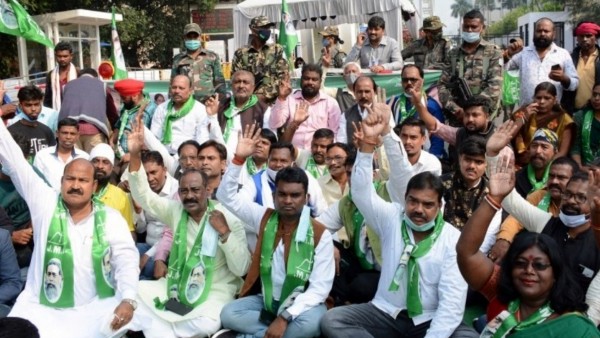 A Jharkhand Cabinet minister has said that the ruling JMM's protest against the policies of Tata will continue. The Tata group of companies has drawn the displeasure of the Jharkhand Mukti Morcha (JMM) which has put forth several demands, including 75 per cent reservation for locals in its various establishments located in the state.

Earlier on Wednesday (November 17), five JMM legislators along with local residents had protested the move to shift the head office of a few Tata group companies from Jamshedpur to Pune.

After the meeting of the Central Working Committee of JMM here on Tuesday, state minister Mithilesh Thakur said: “Our agitation will continue against the policies of Tata company, and our strategy will be announced soon.”

He added that the protest is not against the Tatas, but “it is a fight for the rights of the locals”.

Jharkhand Cabinet minister Champai Soren also reiterated that Tata should stop looking down on the people of the state.

“It should provide employment to the people here, otherwise the protests will continue,” Soren said.

Even as no formal decision on the issue has been made, going by the statements of key leaders after the working committee meeting, it seems that the party’s agitation against the Tata group would gain momentum.

In a memorandum submitted by the JMM to the Tata management, there is also the demand to bring the headquarters back to Jamshedpur and reserve 75 per cent posts of Class 3 and 4 positions for tribals and indigenous people.

JMM General Secretary and spokesperson Vinod Pandey said the party will intensify the fight against the Tata management, and “it will continue till the people get their rights”.

However, Tata Cummins had earlier issued a statement saying that the company is only shifting its registered office.

“This will not affect the functioning of the company in Jharkhand or Jamshedpur. We in the company comply with all labour laws and other rules of the state government,” it had said, adding, “We are fully committed to carry out our business in Jamshedpur. As before, we will continue to contribute to the development and prosperity of Jharkhand.” (IANS)