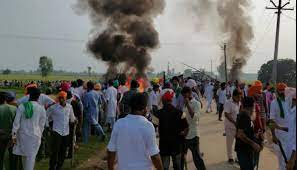 The ‘killer’s at large.

The UP Police have apparently not found time to arrest Ashish Mishra, the son of Union minister Ajay Mishra Teni, because they were ‘busy -- first with the negotiations and then with post-mortems and cremations.

The FIR against Ashish Mishra was filed 24 hours ago and he has been charged with murder and causing death by negligence. The police inaction is fuelling the anger of farmers as well as opposition leaders.

Additional Director General Police (Lucknow Zone), S.N. Sabat, said, “We were first busy with the negotiations with the farmers and then with the post-mortems and then with getting the cremations done. We follow a due process in every case and we will investigate this case thoroughly and then initiate necessary action.”

Sabat denied that the police are taking time because the accused are high-profile people.

“The attitude of the police is towards the victim, and not the accused,” he said.

The farmers in Lakhimpur Kheri, who were protesting against the visit of Deputy Chief Minister Keshav Maurya on Sunday, said the minister’s son was at the wheels of an SUV that mowed down a group of people, killing four and injuring several others. The violence it triggered led to four other deaths.

A video of the horrifying moment circulating on social media shows an SUV driving into a group of protesters from behind, crushing many of them.

Ajay Mishra, the Union Minister of State for Home, has claimed that the vehicle overturned, crushing the protesters who were throwing stones at the cavalcade. He also claimed that his son was not present at the site of the incident on Sunday.

The farmers have also alleged that one of the four people died of bullet wounds, demanding that a second post-mortem be conducted at a hospital in Delhi.

Ashish Mishra, meanwhile, said, “I was not in the car. I was at my paternal home in Banwirpur village where a wrestling event was organised. I was there from the morning till the end of the event.”

The Congress has posted a video of the incident which sparked violence in Uttar Pradesh’s Lakhimpur Kheri on Sunday.

The video was posted on the official Twitter handle of the Congress at 11.33 p.m. on Monday.

Congress claimed that the video was of the incident in Lakhimpur Kheri.

The police, however, did not comment on the video.

The video shows a farmer, seen wearing a white shirt and a green turban, landing on a jeep’s bonnet as others jump aside on the side to save themselves.

The jeep moves on, followed by a black SUV. At least half a dozen individuals can be seen lying on the side of the road as the two vehicles make their way ahead.

“The silence from the Modi govt makes them complicit?” read the tweet.

Nine persons, including four farmers and one journalist, were killed in the Tikunia village during clashes that followed after this incident.

The Uttar Pradesh government declared on Monday that a retired high court judge will probe the incident.

The state government has also announced Rs 45 lakh each as compensation for the families of those killed in the incident.

A number of Opposition leaders, including former Uttar Pradesh Chief Minister Akhilesh Yadav and Congress General Secretary Priyanka Gandhi Vadra, were prevented from going to Lakhimpur Kheri to meet the families of the deceased.

“The sections of law under which Priyanka Vadra has been reportedly charged are laughable. S.151 CrPC contains no offence at all. It is a provision for arrest for a period not exceeding 24 hours. No person can be ‘charged’ under S. 151, S. 107 & 116 of IPC related to abetment. You must say who she abetted. You must say what crime she abetted. Abetment cannot be in the vacuum,” Chidambaram said.

Priyanka Gandhi has been formally arrested after a case was registered against her at the Hargaon police station in Sitapur under various sections of the Indian Penal Code, including disobeying prohibitory orders and abetment.

The PAC guest house where she has been under detention since Monday has been notified as a temporary jail.

The case, according to official sources, has been filed under Sections 151, 107 and 116, on a report given by the station house officer of Hargaon to the magistrate.

Earlier on Tuesday morning, Priyanka Gandhi tweeted a viral video of the Lakhimpur Kheri incident and asked why the person behind the killing of four farmers has not been arrested while she has been under detention without an FIR.

Her party alleged that drones were being used to monitor the movement of Priyanka Gandhi at the PAC guest house. (IANS)