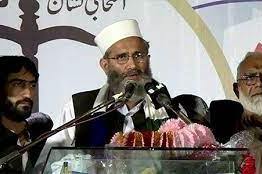 Pakistan Jamaat-e-Islami chief Ameer Sirajul Haq has said that the Pakistan Tehreek-e-Insaf (PTI) government led by Imran Khan has practically proved to be a disastrous tsunami for the country, which destroyed every institution over the last three-and-a-half years, and the worst damage it caused was to surrender the country’s economic control to the IMF and the world money lenders, The News reported.

A large number of men, women and children participated in the sit-in, raising slogans against the government, holding banners and party flags. As part of the sit-in campaign, JI workers earlier staged sit-ins in Gujrat and Sheikhupura in the previous weeks.

Haq termed the PTI government as the worst in the country’s history, which devalued national currency by over 58 per cent without the country fighting any war or undergoing any emergency, the report said.

He said Prime Minister Imran Khan must tell the nation about his performance until now instead of making false announcements in public meetings.

Citing the recent Rs 12 per litre hike in petrol price, he said that Khan had initially rejected the OGRA summary, but later approved it when he was told that the IMF had demanded it.

Haq said the Prime Minister had promised to provide 10 million jobs, but the government instead rendered millions jobless.