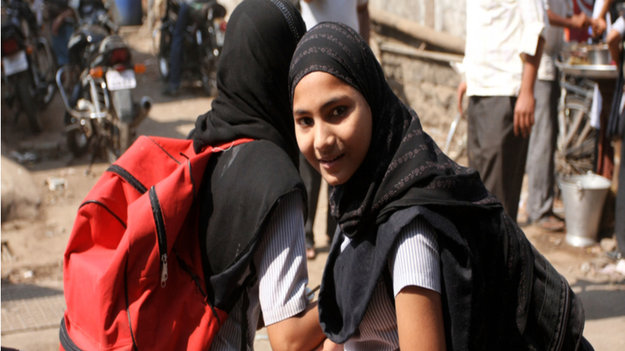 With the Hijab row snowballing into a major controversy, the Karnataka High Court on Tuesday said the international community is observing us and it is not a good development. After the controversy over wearing a headscarf or hijab in schools escalated in Karnataka, a statement in this regard by a Minister has sparked controversy in Madhya Pradesh.

The hearing in the matter will resume after lunch.

A bench headed by Justice Krishna S. Dixit said: “For me, Constitution is Bhagvad Gita. We have to act according to the Constitution. I have come to this position after taking oath on the Constitution. The emotions on the issue should be set aside. Wearing a hijab should not become an emotional issue.”

It also observed that the government has to answer many questions on the issue.

“I am getting messages from innumerable numbers. The whole WhatsApp chat is filled with this discussion. The institutions can only work as per the constitution. The government can give orders, but people can question them,” the bench noted.

“The government can’t come to decisions on surmises,” it said.

The bench stated that since the government is not agreeing to the petitioner’s request of allowing students to wear hijab for two months, it will take up the case on the basis of merit. “There are protests and students are on roads, I am observing all developments in this regard,” the judge noted.

The bench also asked if all traditions are fundamental practices and what is their jurisdiction.

The bench also asked whether they will have to be practiced at all places. It questioned the government at one point that why can’t they allow hijab for two months and what is the problem?

Meanwhile, after the controversy over wearing a headscarf or hijab in schools escalated in Karnataka, a statement in this regard by a Minister has sparked controversy in Madhya Pradesh.

Madhya Pradesh School Education Minister Inder Singh Parmar on Tuesday said that hijab will not be allowed in schools in the state. “Students will be allowed only to wear dress code and hijab is not a part of dress code,” Parmar said on Tuesday in Bhopal.

Parmar, while talking to media persons also said that he has directed the school education department to ensure that only dress code is allowed in schools in Madhya Pradesh.

Madhya Pradesh Government is planning to ban hijab in schools. Also, in a video which went viral on social media, Parmar is being heard saying the department is working (school education department) on a dress code for Chief Minister Rise Schools in order to bring uniformity and equality among students.

The minister also claimed that “school uniform isn’t connected to any community, it is for all and it was unfortunate that people are connecting it with a community.”

Speaking on this issue, Arif Masood, Congress MLA from Bhopal said that it is an unfortunate statement from the School Education Minister. “It is unfortunate that MP school education minister is making such statement. Daughters look good when covered. Hijab has damaged nothing but has always protected girls,” Masood added.

This came after a stand-off between hijab wearing girls and saffron shawl wearing students took place in various districts of Karnataka. (IANS)