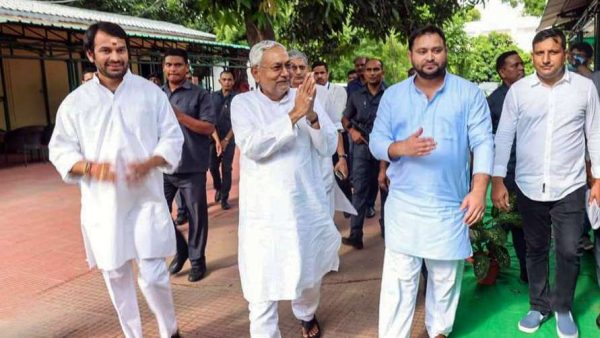 After the deal; Nitish with Tejashwi.

Nitish Kumar will take oath as Chief Minister of Bihar tomorrow at 2 pm, after he ditched the BJP and announced a new "Grand Alliance" which includes Tejashwi Yadav and other Opposition parties. The Mahagathbandhan (Grand Alliance) of seven parties, one Independent will work closely, Nitish Kumar said after his second meeting with the Governor on Tuesday. In the first one, he resigned as Chief Minister of the government which consisted of his party, the Janata Dal United or JDU, and the BJP; less than an hour later, he returned to the Governor, accompanied by Tejashwi Yadav and other Opposition leaders, to state that they should be invited to form the next government based on their combined strength. "I have resigned, I have informed all my MLAs," said Nitish Kumar after his first session with the Governor. He said the decision to split from the BJP - for the second time in nine years - was based on the feedback he received Tuesday morning at an interaction with his party's legislators.

Bihar Governor Phagu Chauhan on Tuesday invited Nitish Kumar to form the government in Bihar again after the JD-U leader staked his claim and submitted the list of 165 MLAs supporting him.

The swearing-in ceremony of Nitish Kumar is scheduled at 2 p.m. on Wednesday at the Rajendra Mandapam inside Raj Bhavan.

Besides him, RJD leader Tejashwi Yadav will also take the oath as Deputy Chief Minister.

Nitish Kumar wants to take the oath on Wednesday afternoon as it will be a “Shubh Muhurat” (auspicious day). Wednesday is a “Purnima” of the ongoing Sawan month, which is of great importance in Hindu tradition.

While some sources said that six ministers will also be sworn-in on Wednesday, there is also a possibility that only Nitish Kumar and Tejashwi Yadav will be sworn-in and the cabinet expansion will take place later on.

However, it is not clear who the other MLAs would take oath at Wednesday’s event. Sources have said that the portfolios occupied by the BJP will be given to the RJD, the Congress and Left parties.

The leaders of the Mahagathbandhan are tightlipped on the distribution of portfolios but sources have said that Nitish Kumar will keep the Home portfolio with himself, and the post of Assembly Speaker will go to the RJD.

It is understood that Nitish Kumar will distribute the portfolios in a ratio of 1:4 or one minister for four MLAs. There is also a possibility that as there are 7 alliance partners in the Mahagathbandhan, the ratio may jump to 1:5.

For the RJD, Bhai Virendra, Tej Pratap Yadav, Rahul Tiwari, etc are also in the race.
The swearing-in ceremony is scheduled at 2 p.m. on Wednesday at the Rajendra Mandapam inside Raj Bhavan.

Earlier in the day, amid hectic political activities in Patna, sources had said a broad consensus on the government formation had been built, which included retaining Nitish Kumar as the chief minister, Tejaswi Yadav the Deputy Chief Minister and Speaker from the RJD.

The promise of five lakh jobs for the youths is also one of the key points of RJD’s reunion with JD(U) .

The RJD had mooted the idea of public welfare and its manifesto had promised 10 lakh jobs.

“The first decision will be the announcement of jobs,” said an insider, who claimed that there are no differences on the power sharing arrangements.

The Congress is likely to get a ministerial berth after a formula was evolved during the discussions while the Left parties may extend their support from the outside.

Earlier, in the day, the Congress and Left parties handed over the lists of their legislators to Rashtriya Janata Dal (RJD) leader Tejashwi Yadav.

Madan Mohan Jha, the state president of Congress said: “We will support Nitish Kumar if he leaves the BJP and forms a new government with the help of Mahagathbandhan. We have also given the list of all 19 MLAs of our party to RJD leader Tejashwi Yadav.”

Mahboob Alam, the MLA of CPI (ML) said: “We have also given the list to Tejashwi Yadav. We will uproot the BJP from power. We are giving support to Nitish Kumar for the formation of a new government. (IANS)