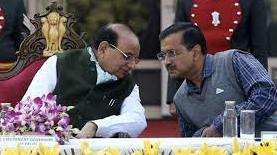 The newly-elected Municipal Corporation will meet for the first time after AAP won the December election, ousting the BJP after 15 years.

After nominating 10 members to the newly elected Municipal Corporation of Delhi (MCS), Saxena today named a BJP councilor as temporary Speaker to preside over the Mayor election tomorrow.

Wrote a letter to Hon’ble LG against the illegal and unconstitutional manner in which notification on aldermen has been done. pic.twitter.com/SdTVcujtGn
— Arvind Kejriwal (@ArvindKejriwal) January 5, 2023

Expressing “dismay and consternation”, Arvind Kejriwal accused the Lt Governor of bypassing his government in Delhi and of “blatantly unconstitutional, colourable exercise of power”.

Saxena’s had “left no stone unturned and spared no effort to interfere with and impeded the administration and functioning of the Delhi government”, the Delhi Chief Minister said in a letter shared on Twitter.

Kejriwal also accused Saxena of trying to influence the election and intentionally picking members so that the civic body is “skewed” towards the ruling BJP.
The turf war in Delhi intensified as Saxena today picked a BJP leader as temporary Speaker to preside over the election of a Mayor tomorrow, ignoring AAP’s recommendation.
The newly-elected Municipal Corporation will meet for the first time after AAP won the December election, ousting the BJP after 15 years.
Saxena named BJP councilor Satya Sharma pro-tem Speaker instead of Mukesh Goyal, the AAP member recommended by the Delhi government.

Satya Sharma has been Mayor of the East Delhi Municipal Corporation in the past. Mukesh Goyal is the senior most councilor in the new civic body.
AAP won 134 of 250 wards in the first municipal election held after the redrawing of constituencies and the merging of the Municipal Corporation of Delhi (MCD) last year. The BJP finished second with 104 seats and the Congress ended up with nine seats.

The BJP, in a U-turn after suggesting that it would not contest the Mayor’s post, announced its own candidate.

Three names are in the running for the post of Mayor – Shelly Oberoi and Ashu Thakur from AAP and Rekha Gupta from the BJP.

Upset by the decision of the Lt Governor – who represents the Centre in Delhi and reports to the Union Home Ministry – AAP accused the ruling BJP of destroying all democratic traditions.

“It is the tradition that the senior most member of House is nominated as pro-tem Speaker or presiding officer. But BJP is hell bent destroying all democratic traditions and Institutions,” tweeted AAP MLA Saurabh Bhardwaj.