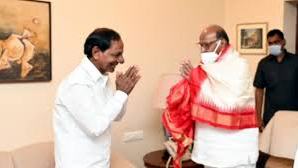 Following a series of ballistic attacks on Prime Minister Narendra Modi, Telangana Chief Minister K Chandrashekar Rao flew to Mumbai to meet his Maharashtra counterpart and Shiv Sena chief Uddhav Thackeray and Nationalist Congress Party president Sharad Pawar. The meetings are being seen as part of Rao's efforts to forge a non-Congress front to take on the BJP in the 2024 general election. The Telangana Chief Minister has been meeting leaders of regional parties in this connection. Amid a bonhomie of hugs and handshakes, the chief ministers said, "winds of change are blowing in the country" and now its "time for a change" (Par

The Thackeray-Rao duo also declared that the foundations of a united third front of Opposition parties in the country to challenge the Bharatiya Janata Party and would be laid from Maharashtra.

They expressed serious concerns over the future of the country and what direction it is going, given the “politics of vendetta” pursued by the BJP.

“We have discussed several issues in detail. We feel there is a need for structural and policy changes in the country. We condemn the manner in which central probe agencies are being misused. The Centre must change its policies or it will face the consequences,” Rao said.

The two leaders said this is just the beginning and now talks will be held with other national-regional parties with a strong developmental agenda to strengthen the country.

Expressing concerns over the political environment in the country, Thackeray said that “politics of vengeance of the lowest levels has been let loose”.

“Our Hindutva is not about taking revenge on others. Today, the whole focus is on defaming others while resorting to lies and claims of achievement and alleging others have done nothing,” Thackeray said strongly.

Rao invited Thackeray to visit Hyderabad for another round of meeting and said his next conclave with the state leaders would be held in Baramati (Pawar’s hometown in Pune) soon, if needed.

“Our discussions were based on principles and the problems confronting the country. It’s our responsibility to show the way to the countrymen, solve the problems of farmers and commoners,” said Pawar.

“Pawar Saheb is our senior leader. He supported our agitation (for Telangana state) right from 1969 till its birth (2014). We feel the country is not being run properly, development is stalled and the expected progress has not taken place,” the Telangana Rashtra Samiti (TRS) President said.

They exhorted that now is the time to take all parties together and forge ahead unitedly with a new agenda to fulfil the hopes and aspirations of the people of the country.

Welcoming Rao’s political pilgrimage to Maharashtra, Patole pointed out how the TRS was once an ally of the BJP and helped it immensely, but later the BJP started destroying the TRS.

“The BJP has been doing that with all its former allies trying to finish them off, and now they have all realised it. Even the people of the country have understood the BJP’s strategem,” the Congress chief said.

Patole said that now the time has come to give a befitting challenge to the BJP which the Congress and UPA can do effectively to ensure a much-needed change in the country’s politics.

Both Thackeray and Rao said that a good start has been made today with the objective of ‘parivartan’ (change) to protect India’s democracy, and said “you will see very good results of these meetings soon”.

Interestingly, the Opposition state BJP president Chandrakant Patil scoffed at the Thackeray-Rao and Pawar-Rao meetings, and declared that in 2024 Lok Sabha polls, Prime Minister Narendra Modi would lead the party to win over “400 seats”.

BJP ally Republican Party of India (A) President and Union MoS Ramdas Athawale reiterated that the Shiv Sena and BJP should forget the past and join hands for the benefit of the people.

“I humbly appeal to Uddhav Thackeray to let bygones be bygones and again ally with the BJP… They were both friends for over 25 years before some misunderstandings cropped up. They must work together for the development of the state,” Athawale urged.

Thackeray was joined by several of his ministers, MPs Sanjay Raut and Arvind Sawant, son Tejas, Pawar was flanked by senior leaders like Praful Patel and other leaders.

Thackeray assured support to Rao for his efforts to form a national alternative. After the meeting at Thackeray’s residence, both the leaders told reporters that they would hold talks with the leaders of other regional and national parties to strengthen the country.

The Telangana Rashtra Samithi (TRS) chief said there is a need for a big change in the country.

“A beginning has been made with our meeting. I believe a good message has gone out from here,” said KCR, as he hoped that the meeting would yield desired results.

Stating that the campaigns launched from Maharashtra had succeeded in the past, KCR said that Maratha warriors like Chhatrapati Shivaji Maharaj and Balasaheb Thackeray inspired the country.

He said they want to move ahead with the same spirit and fight injustice and save democracy.

Meanwhile, actor-politician Prakash Raj is emerging as a key figure in the efforts by K. Chandrasekhar Rao in cobbling together an anti-BJP alliance.

Prakash Raj, who acts in Telugu and other South Indian films, is being seen as a key member of KCR’s team to forge a front of like-minded regional and national parties.

A bitter critic of Prime Minister Narendra Modi, the actor is an admirer of Telangana Rashtra Samithi (TRS) chief. As Raj enjoys good rapport with leaders in his home state Karnataka and also in Tamil Nadu, KCR is believed to be using his services to reach out to various parties.

This was not the first time that Prakash Raj was seen taking an active part in the political deliberations around the front.

He was also seen with KCR in 2018 when the latter held series of meetings with leaders of various political parties to prepare ground to launch an alternate front.

Prakash Raj was present when KCR met former Prime Minister and Janata Dal-Secular leader H.D. Deve Gowda in Bengaluru. A few days before this meeting in April 2018, the actor had called on the TRS leader and discussed the proposed plans to float a new front of non-BJP and non-Congress parties.

Prakash Raj had unsuccessfully contested as an independent from Bengaluru Central Lok Sabha in 2019 elections. He recently suffered defeat in the elections of Movie Artists Association (MAA), the apex body of Telugu film industry.

Prakash Raj, who claims to be a strong believer in secularism and unity in diversity, had used various forums to launch a bitter attack on policies pursued by the Narendra Modi government since 2014. He had also taken active part in protests against Citizenship Amendment Act (CAA) and National Register of Citizens (NRC).

The award-winning actor, who acted in many Telugu films, had also declared his support to the TRS in 2020 elections to Greater Hyderabad Municipal Corporation (GHMC).

After defeat in the MAA elections at the hands of Manchu Vishnu in October last year, Raj had announced his resignation from MAA saying he was pained over regionalism dominating the elections.

Raj lamented that words such as ‘tukde tukde gang’ and ‘terrorists’ were used in the election campaign. He pointed out that the Telangana BJP chief Bandi Sanjay, while congratulating Vishnu and others, commented that “nationalism” had won the elections.

BJP leader Muralidhar Rao slammed KCR for travelling with Prakash Raj to Mumbai. He asked the Chief Minister to explain what his intention was in taking the actor with him. He remarked that KCR travelling with disruptive forces is dangerous.

He alleged that KCR was visiting other states to divert attention from the people’s anger towards his government. (IANS)