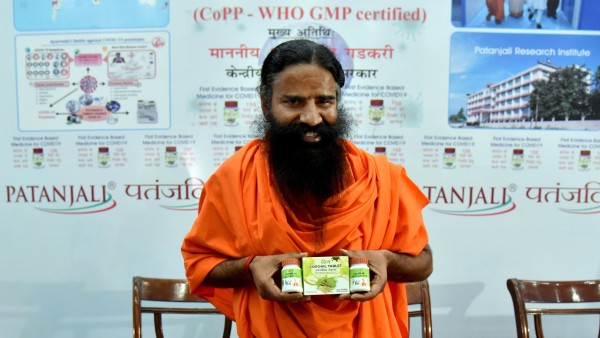 Coronil, the so-called immunity booster kit manufactured by yoga guru Ramdev's Patanjali group in India, has landed in a controversy in Nepal after the Himalayan nations Department of Ayurveda and Alternative Medicine imposed a ban on its distribution.

The Health Ministry of Nepal, however, has remained silent over the ongoing controversy regarding the distribution of Coronil kits, which have also landed in controversy in India and Bhutan.

The controversy erupted in Nepal after the Patanjali Yoghpeeth last Thursday handed over Coronil kits, sanitisers, masks and other immunity booster medicines worth crores of rupees to outgoing Health Minister, Hrydesh Tripathi.

The day after he received the support from local officials of the Patanjali Yogpeeth Nepal, Tripathi was removed as the Health Minister.

“The Coronil kits provided by the Patanjali Yogpeeth did not receive permission from the Department of Drug Administration, so we have decided not to distribute it,” Basudev Upadhyay, the Director General of the Department of Ayurveda and Alternative Medicine, said in a press conference.

“The Coronil kit could be beneficial for the treatment of respiratory disorders, but it has not taken permission from the Department of Drug Administration, so we cannot distribute it,” Upadhyay added.

As per Nepali law, any drug can be imported only after obtaining permission from the DDA.

Meanwhile, the spokesperson at Nepal’s Health Ministry, Krishna Poudel, said that he is not aware about the distribution of Coronil kits in Nepal.

“We do not know if the outgoing Health Minister Tripathi accepted the support. We have heard that it is yet to get permission from the DDA,” said Poudel.

“Coronil is not registered with the DDA and it cannot be distributed or sold out without registration,” DDA spokesperson Santosh K.C. said.

Meanwhile, Patanjali Yogpeeth said that the consignment of 1,500 Coronil kits was provided upon the request of the government of Nepal.

Officials at Nepal’s Health Ministry said that officials from Patanjali Yogpeeth in Nepal and India had approached former Health Minister Tripathi directly, handing over some documents that received permission from the government of India for its distribution and provision of selling for the general public as an immunity booster.

The Bhutan government had already rejected the support provided by Patanjali. (IANS)