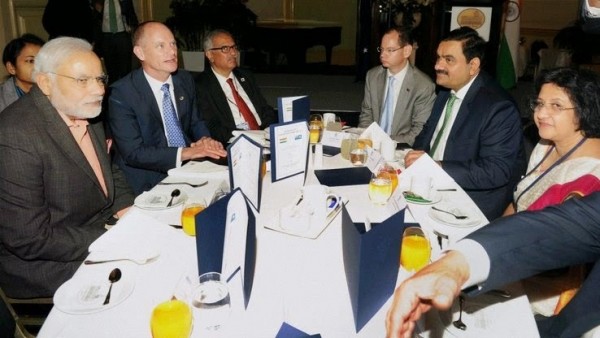 Adani (second from right) the new industrialist on the rise under Modi in Queensland with the PM. File

The Adani group’s proposed $7-billion coal mine in the Australian state of Queensland was cleared by the state government Monday.

The infrastructure conglomerate also won a commitment from the state government to hold short-term, minority stakes in rail and port infrastructure needed to unlock massive coal reserves in the untapped Galilee Basin, The Melbourne Age reported.

“We are bringing on board valued partners in different facets of this integrated project, ensuring we will meet our guidance of first coal in 2017,” Adani Mining CEO Jeyakumar Janakaraj was quoted as saying in a statement.

Analysts and project finance experts, however, believe that Adani may have underestimated the challenge of raising funds for the project.

Adani Enterprises has also signed a memorandum of understanding (MoU) to line up a loan of up to $1 billion from the State Bank of India (SBI) for the Carmichael mine in Queensland, which it aims to build by the end of 2017, the report said.

“The MoU with SBI is a significant milestone in the development of our Carmichael mine,” Gautam Adani, Adani Group chairman and founder, said in a statement in Brisbane.

Adani came to Brisbane with a business delegation from India for the G20 summit.