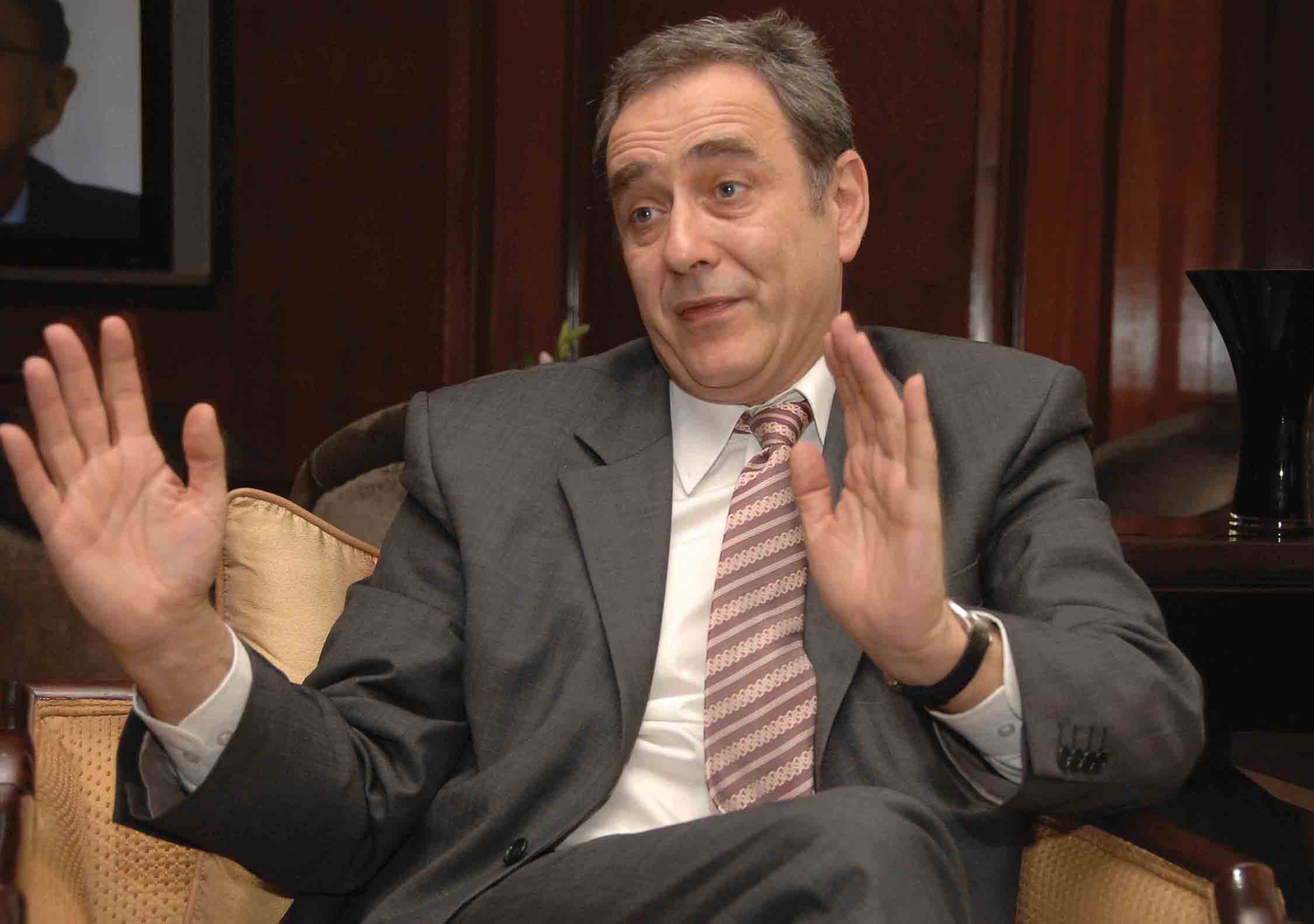 Mark Sofer is Israel’s Ambassador to New Delhi. He has been articulately defending his country’s engagement with the Hamas in Gaza, which has so far killed more than a thousand Palestinians. But Sofer is hopeful of peace and a resolution of the problem in the new future. In a conversation with Renu Malhotra, he makes his point forcefully.

Current: The region you come from is in chaos, hard-liners are gaining power and peace is further away than ever.
Sofer: Not at all, peace might be nearer. I think that the pragmatic Israel leadership and wider pragmatic world (Egypt, Jordan, Morocco etc.) – all agree on the contours of peace which includes a two-state solution that is Israel and Palestine living side by side. The main obstacle to the solution is the hard-line extremist organisations such as Hamas and Hezbollah, both supported heavily by Iran. It’s only the weakening of these hardliners that can contribute towards and sustain peace in the region.

The world perception of Israel’s attack is that it launches a carefully planned aerial assault on a tiny, largely defenceless area, raining bombs on one of the most densely populated places on earth, killing militants and civilians alike and bombing houses filled with women and children. It has led to protests worldwide. Can Israel justify such behaviour?
This is not the worldwide response to the Israel-Palestine crises. There is quite a lot of worldwide perception that is sympathetic to the Israeli cause. This has come after six years of rocket attacks from Gaza into Israel causing half a million people to be within 15 seconds of a bomb shelter. The first priority of any government is to secure its citizens’ security. We have tried everything to avoid a military confrontation with Palestine. Each and every death, be it a Palestinian or an Israeli, is painful and must be avoided. Every effort is being made to minimise collateral damage to life and property. We are largely targeting Hamas.

Even president-elect Barack Obama commented that if his house with his daughters in it were being subjected to rocket attacks, he would “do everything in my power to stop that.” Obama may have a clear mandate to change America’s direction in the Middle East, but even he has deemed it too politically dangerous to say anything critical of Israel.
The international community as whole has put the blame on Hamas. There is no doubt about that. The question is will we let the terrorist organisation run the day or will we resist them. When a country is attacked, it gets international sympathy, but when it fights to defend itself, the sympathy dissipates.

Israel has the right to defend itself like any other state. But not all acts of self-defence are legally or morally equivalent.
The question is based on a wrong premise.

These attacks can be seen as a textbook form of state terrorism. And under the circumstances of Israel’s vice-grip on Palestinian lives, no more morally justifiable than Hamas’ repellent attacks.
This is not a question but a statement which is totally erroneous. However, those who know us know that we are doing everything to alleviate human suffering. The death of a Palestinian child is as painful to us as the death of an Israeli child. The Palestinians in Gaza are held hostage by their own extremist leadership.

In Israel’s newspaper, Haaretz, Gideon Levy has argued that Israel’s indifference to Palestinian casualties is a sign of a collective moral collapse. He writes “The moral voice of restraint, if it ever existed, has been left behind. Even if Israel wiped Gaza off the face of the earth, killing tens of thousands in the process, one can assume that there would be no protest.”
In any democratic country, one finds anti-establishment journalism. You can see it in India too. You can see anti-establishment, virulent journalism in Gaza and Iran too. The writings of a journalist do not necessarily reflect the way the people of the country feel.

After five years of George W. Bush’s “war on terror,” a war whose ideology and methods followed Israel’s militarist approach to the letter, and which has failed in every conceivable way, America has still not learned that there are no military solutions in the Middle East. What about Israel?
Israel is not attacking Palestine. We want to live in peace but we are unable to do so as the agenda of the current leadership in Gaza is not only the eradication of Israel but also of Jews. The Hamas is responsible for the war and bombs in synagogues, buses and other public places which have killed about 1000 innocent Israelis. The Hamas is recognised as a terror organisation in the international community.

One of the things that motivated Osama bin Laden to launch the 9/11 attacks was the televised film of Israel bombing Beirut apartment buildings during its 1982 war. What burning hatred is being sown in Arab/Muslim hearts as Gaza explodes? And what bitter harvest will it produce?
Prior to 9/11, Osama bin Laden had hardly mentioned Israel-Arab conflict. To ascribe this to him is laughable. Secondly, it is not about Islam as preached by Bin Laden, Lashkar-e-taiba and Hamas. Islam is all about peace and tolerance and the extremist groups are strongly condemned by Islamic leadership worldwide.

Thirdly, should Israel accept terror? Should Israel be indiscriminately targeted? No, we cannot live in fear, we will achieve peace in the Middle East because of our will to compromise in the pragmatic Arab world despite the attempts of the fanatic Arab killers to jeopardise all moves towards peace and stability.

These attacks will only weaken Mahmoud Abbas and the moderate Arab states, which are increasingly seen by their people as ineffective regimes. If Israel continues along this course, it will isolate itself from the rest of the world, which will increasingly see it as a rogue state?
I hope the isolation does not happen. I sincerely hope that there will be a return to peace and not rocket blows. It should be noted that 37,000 rockets have been fired indiscriminately by Palestine into Israel in the last 6 years.

Hamas is not the problem; it is a symptom. Treating it as the problem only prolongs the crisis. The problem is political and historical: the dispossession of Palestinians and the ongoing Israeli occupation of their land. Until that fundamental problem is resolved – and the hour when it can be resolved by a two-state solution may already have passed – Israel and America’s attempts to bludgeon Palestinians, Arabs and Muslims into submission will only generate more hatred, more violence and ever more extremism?
Israel accepted the 1948 UN Resolution which included a two-state solution to the Israel-Palestine problem. But this was rejected by Palestine leadership. The vast majority of the Palestinian population, Israel and the international community accept this solution but the Hamas and their Iranian mentors reject this solution. All the hatred and violence ensuing from the present war could have been avoided had Hamas accepted the prolonging of the truce which expired in the last week of December 2008.

Both sides must accept a long-term political settlement, along the lines of the Arab League peace plan, the Clinton parameters and the Geneva Accords. Israel must bolster Abbas’ hands by dismantling settlements in the West Bank, removing checkpoints and improving Palestinian lives. Or it could be too late.
We left Gaza three years ago in order to ignite the peace process but with the terrorists in control in Palestine, there can be no peace. The solution to the Israel-Palestine problem is a clearly demarcated territory for the two states. What will contribute to end the crises is complete cessation of firing of rockets and smuggling of ammunition into Gaza. The peace process then will include dismantling settlements on West bank, return of Palestinian refugees. These steps will ensure economic advancement of Palestine and Israeli people which will further ensure the end of terrorism. I agree there is no military solution to the problem but at the same time terror cannot be allowed to succeed. We like every one else in the world cannot end terror, but we can weaken it to an extent that it does not create trouble. Military solution is always the last choice, when all diplomatic efforts for peace have been exhausted. We ensured that.

Hamas fired more rockets, when UN called for a ceasefire, but we immediately stopped. We are even now ready for immediate ceasefire, complete quiet which will be met with complete quiet but we will not suffer any more. Indiscriminate firing of rockets into our territory will not be allowed to continue. We really hope that attempts at ceasefire are made by the international community so that peace can prevail.