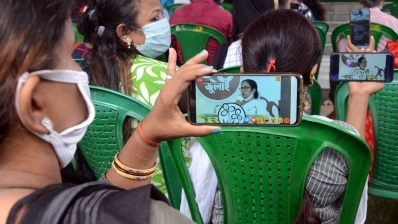 Sounding the bugle for the 2024 Lok Sabha polls, West Bengal Chief Minister Mamata Banerjee during her virtual Martyrs Day speech not only went for an all-out attack against the saffron party but also indicated that the Trinamool is ready to play an important role in national politics as she urged all political parties to forget their narrow self-interests and unite on a single platform.

Trinamool Congress observes July 21 as Martyrs’ Day every year to remember the 13 persons who were killed at a Youth Congress rally in Kolkata in 1993. After a landslide victory in the recent Assembly elections, the Trinamool on Wednesday virtually telecast Banerjee’s speech in various platforms across the country.

Reaching out to the senior opposition leaders of the country, Banerjee said, “We need to build a front and fight for a common cause. So please go and convince your leaders so that we can come together, leaving our narrow self-interests and differences behind, and fight unitedly against the BJP, as only then we can only save this country.”

Warning that it will be too late if time is wasted further on other things, the Chief Minister said, “We have only one interest, which is to save the country and its people. The interest is to save the federal structure and the other states of the country. So go and convince your leaders so that we can start working on the front from now only.”

Making it clear that she would like to function as a common worker in the proposed front, Banerjee said that she would go to Delhi on July 27 and stay there for three days, as she asked senior opposition leaders who were present in the virtual meeting in Delhi to organise a meeting so that the talks can start.

“I always go to Delhi during Parliament session so that I can meet the leaders. This time I hope to meet some senior leaders,” she added.

Not only in Delhi, but the Chief Minister’s speech was aired in several states including Tamil Nadu, Punjab, Tripura and poll-bound Gujarat and Uttar Pradesh.

Invigorating the popular ‘Khela Hobe’ (The game will happen) slogan that hit the nerves of the people during the recently-concluded Assembly polls in Bengal, the Chief Minister said, “Khela will happen in all states until the BJP is removed from the country. We’ll celebrate a ‘Khela Diwas’ on August 16. We’ll give footballs to poor children”.

Banerjee, who came with the camera of her mobile phone covered as a sign of protest against the Pegasus spyware controversy, also launched a scathing attack against Prime Minister Narendra Modi and the BJP government at the Centre, alleging that the saffron party wants to “turn India into a surveillance state instead of keeping it a democratic country”.

“I cannot talk to anyone. You are paying too much money for spying. I have plastered my phone. We should also plaster the Centre otherwise the country will be destroyed. The BJP has bulldozed the federal structure of the nation,” Banerjee said, adding that the money collected by the Centre through taxes on fuel is being spent on spying.

“Pegasus is dangerous and ferocious. Sometimes I cannot talk to anyone. I can’t even talk to the Chief Ministers of Delhi or Odisha,” she said.

“Spygiri is going on and the BJP has bulldozed our federal structure. Phones of ministers and judges are being tapped. They have finished the democratic structure of the country. Pegasus snooped on the election process, the judiciary, ministers and media houses,” Banerjee said, as she appealed to the Supreme Court to take suo motu cognizance of the alleged surveillance operation using the Pegasus spyware.

Holding the BJP government responsible for the four lakh Covid deaths in the country, the Chief Minister said that the second wave of the pandemic marked the “monumental failure of the Modi government”.

“When the country was suffering from a dearth of vaccines, medicines and oxygen, they (Narendra Modi and Amit Shah) were coming to Bengal as daily passengers during the elections. They had used all their powers — money, muscle, mafia and agencies — but the people of this state have made them realise that they cannot win Bengal. I am thankful to my brothers and sisters, all my booth workers and all those who have supported us in this cause,” she said. (IANS)