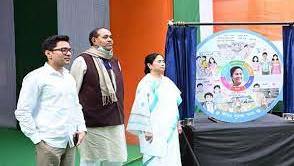 Around 3.5 lakh party workers will reach out to 10 crore people of the state. It is being done so that no one is left out," says Mamata Banerjee.

West Bengal Chief Minister Mamata Banerjee today launched a new campaign for her party, the Trinamool Congress or TMC, ahead of the panchayat polls due in April this year.

“Around 3.5 lakh party workers will reach out to 10 crore people of the state. It is being done so that no one is left out,” she said.

“The party will start the campaign on January 11 and will continue with it for 60 days. Our party workers will reach out to the people across the state and ensure that everyone can avail of the welfare schemes of the state government,” Abhishek Banerjee said.

“Every leader of the party, MP and MLAs will stay at people’s homes for 10 nights,” he added.

When asked if the campaign was launched keeping the panchayat polls in mind, Banerjee said, “When did Duarey Sarkar start? It is a continuous process.”

Mamata Banerjee, a mass leader and typical firebrand grassroots politician, is someone who is known to take challenges head-on will outline how the party will tackle various challenges, especially the image of the party after party leaders were arrested by central agencies which the Trinamool so far has dismissed as vendetta politics.

The TMC faces a challenge from an aggressive BJP which is now re-strategizing after the drubbing at the hands of the TMC in 2021 assembly elections.

The BJP’s focus is on states where it performed well in 2019. The party wants to build on those gains. The Left which was wiped out numerically in the assembly elections is also trying to regroup and regain some lost ground.

The TMC’s campaign in 2021 had a resonance with Bengal voters and Mamata Banerjee will have to replicate something along those lines to ensure similar result in the Panchayat polls – which are seen as an indicator of a party’s grip over voters in the state. Not only Bengal, but two other states, where the Trinamool Congress believes it has a stake are Meghalaya and Tripura, which also has elections in 2023.

Party insiders say Mamata Banerjee will focus on her government’s performance with state schemes as well as the implementation of central government schemes, especially the Pradhan Mantri Awas Yojana.

Reacting to the BJP’s allegations about fake beneficiaries in the scheme, Abhishek Banerjee has hit back, saying, “The government has done tremendous work under the Awas Yojana. The list where the beneficiaries were fake is from East Midnapore in the year 2018 and we all know who is responsible for that,” in a dig at leader of Opposition Suvendu Adhikari, without naming him.

Banerjee also gave a strong message to party functionaries and leaders who have been accused of corruption. The Chief Minister, sources say, is “very upset” over the allegations, as she is known for her simplicity and connect with the common man.

She reiterated that there will be check on party workers as well.

“We will have to keep an eye on people to ensure work is done. It is not the panchayat that has to answer. I have to answer to the people,” Mamata Banerjee told reporters.

Mamata Banerjee also outlined her commitment to her party’s ideology. “Our ideology is very clear. We want united India and unity in diversity. Federal structure must be strengthened,” she said.