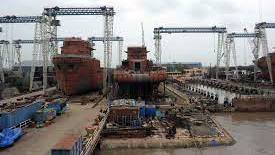 In the latest development in the Rs 22,842 crore fraud, allegedly committed by ABG Shipyard company, the CBI said that it has issued a Look Out Circular (LOC), against the accused in the case.

The CBI revealed that there are around 100 high value bank fraud cases that could not be registered due to non-accordance of specific consent u/s 6 of the DSPE Act by the state governments where the general consent has been withdrawn.

Also, the bank account details of ABG Shipyards and related parties have been obtained. Subsequently, LOCs against the accused have already been opened by the CBI. Earlier, the State Bank of India had also opened LOCs against the main accused in 2019.

“The withdrawal of general consent to a CBI investigation by certain states has made the registration of bank fraud cases more challenging. There are around 100 high value bank fraud cases that could not be registered due to non-accordance of specific consent u/s 6 of the DSPE Act by state governments where the general consent has been withdrawn,” said a CBI official.

In the present case, there are 28 banks involved in a consortium with a huge amount of disbursement.

There were different types of bank loans including CC Loan, Term Loan, Letter of Credit, Bank Guarantee etc. that were given as advance by the banks.

The fraud is primarily on account of huge transfers by ABG Shipyard Ltd to its related parties and subsequently making adjustment entries. It is also alleged that huge investments were made in its overseas subsidiary by diverting the bank loans. Funds were diverted to purchase huge assets in the name of its related parties.

“They took a loan of Rs 1228 cr from the Indian Overseas Bank, Rs 1244 crore from Punjab National Bank, Rs 1614 crore from Bank of Baroda, Rs 7089 crore from ICICI Bank and Rs 3634 crore from IDBI Bank. Later they didn’t pay the banks their dues. Initially the bank initiated an internal inquiry in which it was found that the company was cheating the consortium of Banks by diverting funds to different entities,” said the CBI.

The CBI official said that ABG Shipyard Ltd has been in business with the SBI since 2001. The account of ABG Shipyard turned NPA on 30 November 2013. As per the bank complaint, the NPA is to the tune of Rs 22,842 crore and the majority of the disbursement happened between 2005 and 2012 by a consortium of 28 banks led by ICICI Bank and including SBI.

The account was restructured under the CDR mechanism on 27 March 2014. However, the operations of the company could not be revived.

On 10 September 2014, N V Dand and Associates was deputed to conduct a stock audit of ABG Shipyard Ltd. The audit firm submitted its report on 30 April 2016 and observed various faults on the part the accused company. Subsequently, the account of ABG Shipyard Ltd was declared NPA.

In keeping with a policy implemented since 2014 of red-flagging suspect accounts, commissioning forensic audits by empanelled forensic auditors, and making CMDs liable, a forensic audit was initiated based on the lenders’ decision in the Joint Lenders Meeting on 10 April 2018.

Ernst & Young LLP was appointed Forensic Auditor. As per the usual practice, these forensic audits cover a period starting approximately three to four years prior to the date of the declaration of the NPA, which, in this case was 2016.

The forensic audit of ABG Shipyard Ltd therefore covers the period from 2012 to 2017. Meanwhile, the company ABGSL was also referred to NCLT, Ahmedabad on 1 August 2017 by ICICI Bank, being the lead bank, for Corporate Insolvency Resolution Process(CIRP).

Between April 2019 to March 2020 various banks of the consortium declared the account of ABG Shipyard a fraud.

The CBI is investigating this biggest fraud committed by any company so far.

While ICICI Bank was helmed by the high-profile Chanda Kochhar till October 2018, when she quit in a cloud of allegations, the SBI was captained by Arundhati Bhattacharya, who retired in October 2017.

Of the reported Rs 22,842 crore frauds, the ICICI Bank took the biggest hit of Rs 7,089-crore and SBI ranks third with an exposure of Rs 2,925 crore, with IDBI Bank Ltd. sandwiched in the second slot and duped of Rs 3,639 crore.

Interestingly, the SBI’s Forensic Audit Report (January 18, 2019) — on which the CBI finally lodged its complaint — covers the period April 2012-July 2017, when the ABGSL scam took place — and said the accused “colluded together and committed illegal activities, including diversion of funds, misappropriation, criminal breach of trust and for purposes other than for which the funds are released by the Bank.”

However, the banking unions and experts fume at the manner in which massive public monies have again been blown off in the scam and how the banks are now “shifting the entire blame on the borrowers”.

“Was the entire banking system sleeping during these goings-on. The Reserve Bank of India conducts audits and also has its representative on the bank boards. What were they doing at that time and what was their exact role in the scam,” demanded United Forum of Banking Unions Convenor Devidas Tuljapurkar.

Trade Unions Joint Action Committee (TUJAC) Convenor and banking expert Vishwas Utagi wondered how can the CBI ethically take at face value the SBI’s contentions that the bank officials are not involved, particularly when it has been duped of huge public funds, and whether the other consortium members have also adopted a similar stand.

“In such gigantic frauds involving a big banking consortium, all persons above the GM level are definitely responsible. Will the CBI investigate or connive with SBI? We demand the CBI should honestly investigate from the top — probe Chairpersons, Managing Directors, Directors, etc. to unravel the murky truth,” said Utagi.

Referring to the SBI’s purported ‘accommodating’ stance vis-a-vis AGBSL, All India Bank Officers Association (AIBOA) General Secretary S. Nagarajan said the banks are not sympathetic when it comes to even small Education Loans by needy students.

“Whenever such huge loans are cleared at the Consortium leader’s request, did the other banks cross-check, monitor the accounts or seem enhanced security? If not, then there is something fishy,” Nagarajan pointed out.

Virtually defending ABGSL, the SBI alluded to its glowing past performance of 165 vessels built in 16 years, how the global shipping industry crisis hit with a fall in commodity demand, prices, cancellations and no fresh orders even from defence post-2015.

“The company was finding it very difficult to achieve milestones, as envisaged in CDR. Thus, the company was unable to service the interest and installments on the due date,” said the SBI note to CBI, sounding like a tear-jerker.

Utagi said that since the fraud has been established, even the Enforcement Directorate (ED) and other agencies must also join the investigations to track the money trail and the ultimate beneficiaries of the public funds, as was done in the Punjab National Bank scam by diamantaires Nirav Modi-Mehul Choksi five years ago.

Tuljapurkar feels that since banks have made 100 per cent provisions for NPAs, there will be no new losses accruing from this, and called for a thorough probe despite the huge delays. (IANS)