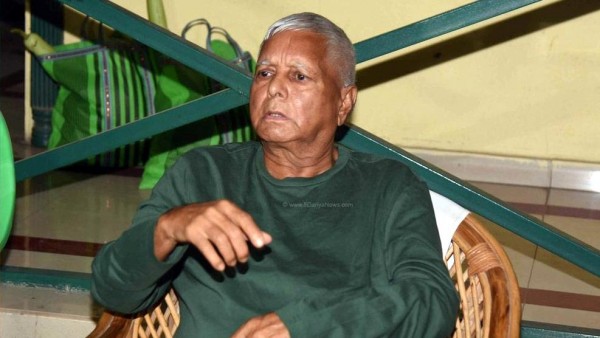 A special CBI court in Ranchi on Tuesday convicted Rashtriya Janata Dal (RJD) chief Lalu Prasad in the Rs 139.35 crore Doranda treasury scam, the fifth fodder scam case, after which he has been taken into judicial custody.

The former Bihar chief minister has filed a plea in the CBI court seeking bail. He said in the plea that if not granted bail, he should be sent to judicial custody in Rajendra Institute of Medical Sciences (RIMS) as he is unwell.

The quantum of punishment will be announced on February 21.

Beside Lalu Prasad, the court has convicted 74 others including former MP Jagadish Sharma, Public Accounts Committee president Dhruv Bhagat in the case while 24 have been acquitted for want of evidence.

Thirty-six convicted persons have been sentenced up to three years in jail.

Earlier, the former Bihar chief minister was found guilty in four cases related to the Rs 950 crore fodder scam, and is serving a sentence of 27.5 years of imprisonment.

In the fifth case related to the scam, an FIR was lodged in the Doranda police station in 1996 and later the CBI took over the case for investigation.

Initially, in case number RC 47 A/96, a total of 170 were accused of corruption, of which 55 have died, seven became witnesses, two confessed to the crime while six are still absconding.

During the hearing of the case in the CBI special court, 575 people testified on behalf of prosecution, while 35 from the defendants. The probe agency produced 15 documents in the case.

Crores of rupees were illegally withdrawn in the name of transporting animals and arranging fodder for them in Bihar’s animal husbandry department. The animals included bull, buffalo, cow, goat and sheep. The documents submitted by the department regarding the transportation were found to be fake. The vehicle numbers shown in the documents were of scooters, mopeds and motorcycles.

The cases occurred during the period of 1990-1996. The Bihar CAG had sent the information about the graft to the government time and again, but the government did not pay heed to it.

The CBI produced the documents in the court, which showed that then Chief Minister Lalu Prasad, despite knowing everything, did not take any action. Lalu also held the portfolio of Finance Ministry.

Earlier, the former Chief Minister has been to prison six times, but was granted bail by the High Court each time.

Following the decision of the special CBI court of Ranchi in the fodder scam case convicting Lalu Prasad, Tejashwi Yadav, the younger son of the former Bihar Chief Minister said that he and his party will appeal in the higher court.

“During 16 years of Nitish Kumar government in Bihar, many scams took place but not a single leader was convicted. Everyone in the country knows that the CBI, ED, Income Tax are working like units of the BJP. They never act on accused like Vijay Malya, Mehul Choksi, Neerav Modi, Lalit Modi and recently a Gujarati Bhai took away Rs 23,000 crore,” Tejashwi said.

“So everyone in the country knows how BJP is acting against opposition leaders. Lalu ji is a representative of the poor and deprived people of the country. They have made Lalu ji a mass leader. He is a symbol of social equality and social justice. That’s why his party RJD became the single largest party in Bihar. There is no need to dishearten with the decision of the Ranchi court. We will fight for him till our last breath. The CBI court has given a decision against him but he was never held guilty in Janata ki Adalat,” Tejashwi said.

Following the decision of the CBI court of Ranchi in 139.5 crore alleged illegal withdrawal from Doranda treasury, Tejashwi said that Lalu Prasad is a complainant of the incident but the opposition made him accused.

According to information, Lalu Prasad has been shifted to Rajendra Institute of Medical Science (RIMS) considering his elderly age and health condition.

Lalu Prasad and 74 others were held guilty of illegal withdrawal of Rs 139.5 crore from Doranda treasury some 30 years ago. The quantum of punishment will be announced on February 21.