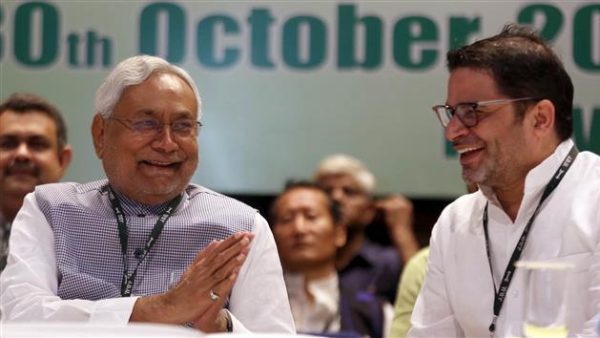 “It’s all marketing for his business” is how Bihar Chief Minister Nitish Kumar’s JDU sees claims by poll strategist Prashant Kishor that he had an offer to rejoin the party. “We know he’s been working for the BJP for some time now,” JDU national chief Rajiv Ranjan Singh alias Lalan said today, speaking just days after a meeting between Nitish Kumar and Prashant Kishor.

“He plants stories in the media. All this is part of a conspiracy that the BJP wants to use for a foothold in Bihar, as it can’t get public support,” Singh claimed.

Ever since Nitish Kumar dumped the BJP last month and started a national Opposition unity drive, the buzz in Patna and Delhi is that ‘PK’, expelled in 2020, might be back with JDU in some capacity.

“It was Prashant Kishor who wanted to meet Nitish ji after the new political situation emerged in Bihar,” said the JDU president today. “Nitish ji told him to first have a word with the party president. So he came to meet me in New Delhi.”

Singh claimed Prashant Kishor used a series of engagements thereafter “only for his own marketing”. “I told him he could return to the party if he stays in discipline. Then Nitish ji gave him an appointment. But, as part of his marketing strategy, he already told the media he won’t meet the chief minister.”

“And then days later, Pavan Varma (former JDU leader) met Nitish Kumar and told him that Prashant Kishor wants to meet. Why would the chief minister say no to anyone wanting to meet him? So they met,” Singh added, “But why will anybody give him any offer? Who is he?”

Nitish Kumar had said after the meeting, “We didn’t talk about anything special. Just normal things.”

Kishor later claimed to have turned down an offer from Kumar due to policy disagreements. He repeated his assertion that if Nitish Kumar and Tejashwi Yadav’s new government provides 5-10 lakh jobs in the next one or two years, he would withdraw his ‘Jan Suraj Abhiyan’ and support them.

Prashant Kishor’s biggest claim to fame is his work for Narendra Modi’s 2014 campaign, but he switched sides soon after to work with Nitish Kumar in 2015, aiding his Mahagathbandhan (Grand Alliance) with the RJD and Congress to defeat the BJP in Bihar.

He entered fulltime politics when Nitish Kumar took him in, first as adviser with cabinet minister rank, and then as JDU national vice-president in 2018. But after Nitish Kumar returned to the BJP-led NDA, in 2020 Prashant Kishor was expelled from the JDU for speaking against the party. Kishor returned to the poll strategy business briefly — working with Mamata Banerjee to fight off the BJP in Bengal — before announcing that he’s back in politics, starting with home state Bihar, last year.

“Prashant Kishor is not a political person. He has a business,” the JDU leader stressed in his media interaction today. About Kishor’s ‘Jan Suraj’ tour across Bihar scheduled to start next month, Singh said, “He is welcome to do that. That’s why he’s doing all this marketing.”

“But this is all part of BJP’s larger conspiracy. It had an agent in JDU before, whom we threw out. Now it’s looking for someone else like that,” he said, referring to RCP Singh, a former JDU chief who left the party just ahead of the JDU-BJP breakup, after a series of snubs by Nitish Kumar.