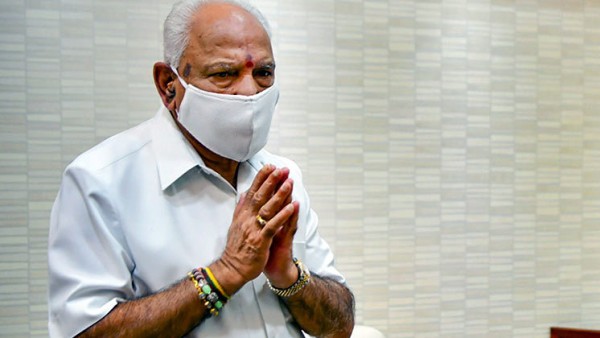 Amid speculation that chief minister BS Yediyurappa might be replaced by this month-end, an audio clip purportedly of BJP state president, Nalinkumar Kateel has gone viral on the same issue in the Coastal region of the state.

The leaked audio clip is in Tulu language, which is widely spoken in the coastal region and the timing assumes significance as speculation is rife that Yediyurappa is on his way out.

As soon as the audio leak happened, the Karnataka BJP tweeted in Kannada demanding Yediyurappa to order a probe. “I think this audio clip is the handiwork of mischievous elements, who want to bring disrepute to our party and to the government in the state. Therefore, I seek from the Karnataka CM to order a high level investigation into the alleged audio leak,” the BJP tweeted.

The BJP further added, “Someone has surely mimicked his voice and the same has been leaked on WhatsApp. Such conspiracies must be exposed, hence I request Yediyurappa to order a probe into this,” the BJP said quoting Kateel on Twitter.

However, in the 47 second long clip, a voice resembling Kateel says, “There is going to be a definite change in leadership, a completely new team will be in place.”

“Don’t tell anyone, will be removing the entire team of (Old guards) (Rural Development and Panchayat Raj minister) K.S. Eshwarappa, (Industries minister and former CM) Jagadish Shettar and we will form a new team,” a voice says.

The voice adds, “Don’t tell anyone, there are three names finalised for the CM’s post – first is union minister, Pralhad Joshi and second being (incumbent speaker) Vishweshwara Hegde Kaageri and another person is being zeroed in by the party central leaders themselves.”

The voice further claims that let the new team come and the entire new team will be under the party’s control unlike in the present situation. “We are there for you all. Power will be with us from now on. All changes will happen in accordance with the wishes of Delhi leaders and nothing will happen from here,” the voice says.

The purported clip went viral a day after Yediyurappa met Prime Minister Narendra Modi, BJP President J.P. Nadda and others from the party’s central leadership during his visit to Delhi.

Though Yediyurappa denied reports about his replacement for the last several months, speculations about his exit have continued to haunt him soon after he was sworn in as CM in July 2019.

After his Delhi visit on Saturday, the chief minister has called for a meeting of the party MLAs and MLCs on July 26, which marks the completion of two years of his government.

The meeting is being seen as more than just a celebration of the government’s landmarks, as some of his own partymen have openly criticised his handling of the pandemic crisis and have also levelled corruption charges against his younger son, B.Y. Vijayendra.

Yediyurappa on June 6, had made a statement that he will resign from the CM’s post if and when the party’s high command asks him to do so.

Following this, BJP Karnataka in-charge, Arun Singh had camped in Bengaluru for three days and tried to hammer out differences between Yediyurappa supporters and his critics.

Yediiyurappa’s critics have been relentlessly accusing him of ‘inactive’ and ‘ineffective’ leader due to his age, therefore he must retire gracefully
Meanwhile, powerful Veerashaiva-Lingayat seer Balehonnur Rambhapuri Swamiji said if the BJP central leadership decides to remove Yediyurappa from the post, the party will have to face serious consequences in the future in the state.

Rambhapuri Swamiji further said that as a religious leader, he is not supposed to comment on political matters; however, it was his opinion that Yediyurappa had led the party during the time of crisis and he is the one who ensured one victory after another in elections for the BJP.

He further stated that Yediyurappa will complete the tenure by continuing in the post for the next two years.

The Veerashaiva-Lingayat religious leaders have always come in open to support CM Yediyurappa whenever his leadership was challenged. Many Swamijis went ahead with public protests when he was asked to resign from the Chief Minister’s post in 2011. (IANS)