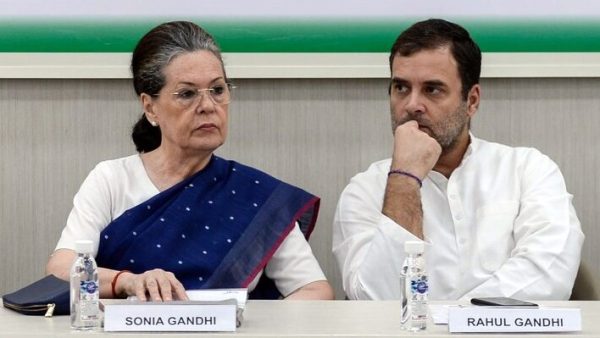 Can’t even depend on its loyalists.

Ashok Gehlot, propped up by Sonia Gandhi as the next Congress president, seems to have initiated a rebellion to keep hold of his chief ministerial position or appoint one of his loyalists in the chair.

Trust the Congress to botch things up like nobody else. Over the last month, the beleaguered Congress leadership finally appeared to be taking matters under control. The 150-day-long nationwide Bharat Jodo Yatra led by Rahul Gandhi was off to a flying start amidst much fanfare, drawing praise for the party from unlikely quarters. The much-awaited elections for the post of party president were also announced, muting some of the criticisms that the party has had to face over its prolonged reluctance to address the leadership crisis.

The exit of senior leaders like Ghulam Nabi Azad, Kapil Sibal and Ashwani Kumar – preceded by an organised dissent by the rebel ‘G-23’ leaders – had thrown the grand-old party off the hook lately. However, the central leadership under interim president Sonia Gandhi seemed intent to tide the party over a constant state of crisis.

Yet, when everything appeared to be falling in place, the Congress is blowing it all over again. This time, the trouble was started by the very man who was propped up by Sonia Gandhi to take over her position and steer the party in the run-up to the 2024 parliamentary polls. Ashok Gehlot, with more than 40 years of political experience, appeared to be ideal for the role. But his love for the chief ministerial chair in Rajasthan is undoing all Congress plans.

On Sunday, 90 legislators of the Rajasthan assembly submitted their resignations to the speaker C.P. Joshi to protest the central leadership’s decision to move Gehlot to New Delhi and back his rival Sachin Pilot to succeed him as chief minister. That Gehlot and Pilot are staunch rivals is not unknown. Pilot had brought the Gehlot government to its knees in July 2020 when he rebelled against the chief minister along with 20-odd MLAs. It is said that Pilot stayed on in the party only because of Priyanka Gandhi Vadra’s assurance that he was next in line for the CM position.

Shashi Tharoor, the other leader in the presidential race, and others like Manish Tewari sent out signals that the party elections may as well be a staged performance to anoint Gehlot as Sonia Gandhi’s successor. But Gandhi loyalists and spokespersons defended the party’s system of elections, saying organisations like the BJP don’t have elections at all.

Amidst the cacophony – and Rahul Gandhi’s dogged resistance to the majority view in the party that he should be his mother’s successor, Gehlot’s appointment as the next party president seemed predetermined.

Except, Gehlot’s tricks and wily manoeuvring – now in full display in Rajasthan – weren’t taken into account.

All was well until Rahul Gandhi declared that the Udaipur Declaration earlier this year mandating “one person, one post” has to be respected by the new president. Though thrown off by the signal, Gehlot has shown that he is not a man to take it lying down.

Initially, he led the media to believe that his election as the party president did not mean he would have to relinquish his chief ministerial chair. Later, he seemed willing to cede the post.

Sunday’s resignations by MLAs appear to be a carefully orchestrated move by Gehlot to hold on to his chief ministerial chair, even if it means giving up on the Congress president’s role. After all, who can forget that it was Gehlot, as the All India Congress Committee’s (AICC) general secretary in charge of organisation, who used every trick in his oeuvre to outbid Pilot for the CM position when Congress scored that rare electoral victory in 2018? If wielding more power as the state head meant surrendering his organisational responsibilities, Gehlot was happy to do so.

“Mere bas mein kuch nahin (Nothing is in my hands),” Gehlot is said to have told the Congress general secretary in charge (organisation) K.C. Venugopal after the Congress MLAs tendered their resignations. This proclaimed helplessness, coming from a septuagenarian leader who is being touted as the next president of the grand old party, reflects poorly on his leadership abilities.

A casual observer may ask that if as a chief minister, Gehlot is unable to control the crisis in his home state, how is he expected to turn a chaotic party like the Congress to be battle-ready against the formidable BJP ahead of the 2024 general elections?

Two positives turn on their head

The two seemingly positive developments in the Congress have turned on its head. The Bharat Jodo Yatra, meant to re-establish the party’s connection on the ground, is spending nearly three weeks in Kerala – a state where the Congress is already strong. The Yatra’s delay in venturing into unfriendly territories has only invited caustic remarks from the party’s rivals.

More importantly, the Congress leaders have transformed the Yatra into a re-launch vehicle for Rahul Gandhi, whose role in the party is increasingly becoming unclear by the day. His reluctance to accept a formal leadership role is now evident. At the same time, all the decisions that the Congress has made in recent times have been with the Gandhi scion’s approval. The Gandhi phenomenon is a liability that the Congress needs to immediately set aside but can’t live without.

Then again, the Congress presidential elections have become a laboured mess. First, the party took more than two years to announce the elections. When that happened, insiders cast aspersions that the electoral rolls comprising AICC members were rigged. The Gujarat Pradesh Congress Committee delegates, some leaders alleged, arbitrarily and secretly prepared the voters’ list for the president’s elections. Similarly, in Himachal Pradesh, the 2012 list of delegates who will vote in the internal elections was simply reissued. The situation is said to be similar in many other states.

Such allegations have only given a further fillip to Shashi Tharoor’s contention that the process of internal elections may not be transparent and fair. Tharoor and four Lok Sabha MPs – Manish Tewari, Karti Chidambaram, Pradyut Bordoloi and Abdul – had recently written to the AICC central election authority Madhusudan Mistry expressing their concern over the “transparency and fairness” of the poll process. They requested him to securely make electoral rolls available to electors and potential candidates for the party chief’s position.

With Gehlot stoking rebellion in his own government, the party has landed in an unnavigable sea. It is for interim president Sonia Gandhi to rescue the party again, take firm decisions, and make the party look respectable. If she has willed the Congress to have a non-Gandhi president in the future, she also has to create the conditions for it. For now, the dilemmas of the grand-old party don’t seem to end.