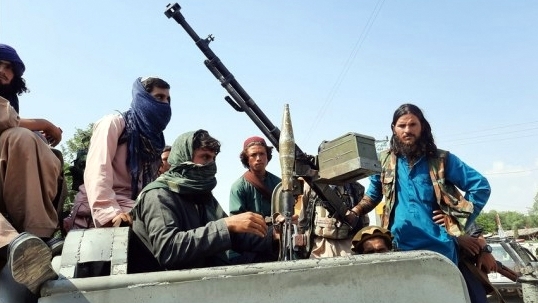 With the recent takeover by Taliban in Afghanistan, the situation has become dynamic and recent reports indicate a surge in Jaish-e-Mohammad (JeM) activities, including a series of meetings of JeM top leaders with Taliban Leadership in both Pakistan (Quetta) and Afghanistan (Kandahar). JeM is reportedly pursuing Taliban for a responsible role in Afghanistan and simultaneously seeking help in its operations in Kashmir.

It was expected that Pak would seek return of the favour extended to Taliban, and shift the entire terror ecosystem including terror training camps to Afghanistan. Grey listing of Pakistan by the FATF has brought the establishment under consistent strain. A prolonged stay in the list is detrimental to its long term sustainability. On the other hand, the world has realized that keeping the hanging sword of FATF over Islamabad has been the only effective way to put pressure on Pakistan to keep jihadi/ terror groups under rein.

Taliban under Pakistan’s perpetual control is definitely not the vision their leaders would have for Afghanistan. This is another reason why Pakistan would like to keep its militant groups on Afghanistan’s soil enabling it to arm twist the nascent Taliban government should it decide to go against its interests. Islamabad has been a master in the art of creating and managing militant/jihadi groups and putting one against the other. It may be recalled that it had come out with the idea of good Taliban-bad Taliban in order to get rid of the elements who had challenged its authority. Presence of even more radical groups like IS Khurasan and AQ, which have amply demonstrated to be acting as other proxies for Pakistan, is also a reminder for Kabul to realize the limits of its functional autonomy. It is in this background that we need to see the surge in militant and infiltration activities in J&K.
Pak Inter Services Intelligence (ISI) has established a number of terrorist training camps in PoJK, Khyber Pakhtunkhwa and Punjab. Terrorist cadres are mainly recruited from Pak provinces of Punjab and Khyber Pakhtunkhwa, besides those from PoJK being coerced into joining terrorist groups, for jihad’ in Kashmir. Indian air strike on Balakot JeM terror camp in retaliation of Pulwama attack in 2019 brought to the fore the open terror activities going on in Pakistan and the patronage of the establishment they enjoy.

Further, in order to facilitate the infiltration of militants/jihadists into J&K, it has established many Launch Pads (LPs) in PoJK and Pakistan along LoC and International Border with India stretching from higher reaches in Kashmir to the south of Pir Panjal in Poonch and Rajouri and further down to Samba and Jammu area. About 250-300 militants are waiting for infiltration at various launching pads/detts across LoC. Pakistan Army facilitates infiltration of terrorists into the Indian Territory by providing inputs on infiltration routes as well as giving covering fire to the terrorists. While at present about 200 terrorists are active in J&K, around 90 of them are from Pakistan.

Pakistan has also devised creative ways to take the Kashmiris to PoJK, brain wash them and provide militant training. It has started sponsoring a number of students for getting medical and engineering education in Pakistan and PoJK. However, once these students crossover through legal route, they are taken to training camps and imparted weapons and explosives training. On return they join the terrorist ranks to wage jihad. J&K police has listed more than 50 such students who had gone to Pakistan to study but later on joined militant ranks. Many of these have been killed in the encounters with security forces.

The ISI is also aggressively smuggling arms & ammunition in J&K, including throughdrones/quad-copters near the IB/LoC. Recoveries of arms/ammunition near LoC and IB were made in Nowshera (June 4, August 28, September 18-19); Hiranagar (June 20); Samba (September 6 &7); and Akhnoor (September 21/22). A number of sorties of Pak drones were detected in the Jammu region in the recent past as well as along the IB in the Gurdaspur sector of Punjab. The weapons dropped include AK Rifles- 8, M4 Carbines-2, Norinco T97 NSR Rifle-1, Pistols-9, Grenades-14, and ammunition. The drones used in this exercise are sophisticated and expensive. Further the arms and explosive smuggled are also available only to state agencies. Thus it is clearly indicative of the involvement of ISI in pushing the weapons in pursuance of Islamabad’s policy of sponsoring terrorism.

Not only smuggling, but the terror groups operating under the command and control of ISI are devising newer ways of causing terror attacks. The first of its kind of attack using a drone/quad-copter (Jun. 27) by Pak-sponsored terrorist groups on an Indian Air Force facility at Jammu airport has added a new dimension to the security threat. In this attack, two pressure-activated IEDs of 2 kg each were dropped by GPS guided drones targeting a hangar with 7 parked helicopters. Inputs point to the involvement of LeT in the attack. Till now drones were being used to push arms/ammunitions across for terrorists in the valley.

While a number of incidents have recently been reported which indicate a fresh impetus in the activities of Pak-based terror groups, including increased infiltration attempts, border crossing events, BAT actions etc, it is only an indication of the future plans Pakistan may have prepared for Kashmir. With Afghanistan under its tutelage, it feels emboldened to repeat the same in its jugular vein. Despite setbacks and straight humiliating defeats in the past, its obsession with Kashmir has not dwindled. From its strategy of ‘bleeding through a thousand cuts’ to the limited war under nuclear umbrella’, it once again appears willing to put at stake its inflated ego even at the risk of being declared a terrorist state.

In this backdrop, it is heartening to realize that even Afghans are wary of negative activities of Pakistan and people came on the streets of Kabul (September 6-7) to protest Pakistan’s intrusive role in Afghanistan. Covert intrusive involvement in other territories has been an area of expertise for the ISI and their survival hinges on pursuing such activities. J&K could thus remain on their radar. (IANS)