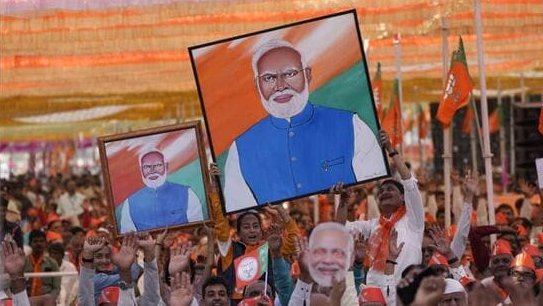 After ruling Gujarat for 27 years, BJP knows how to shield election outcomes from ground realities such as people’s hardships, leaderless govt and corrupt bureaucracy.

Amitabh Bachchan had famously sold ‘Khushboo Gujarat Ki’ in an advertisement promoted by the state tourism department. Today, in the poll-bound state, one can find people wishing for both change and consistency. It may seem like a contradictory demand but only until you realise what Khushboo Gujarat Ki entails.

In the ongoing campaign season, the most visible and vocal are leaders of Bharatiya Janata Party (BJP). Prime Minister Narendra Modi and Union Home Minister Amit Shah have held 35 and 30 rallies so far. On Monday alone, Modi addressed four rallies. The BJP is sweating it out to ensure that the Aam Aadmi Party (AAP) doesn’t cut into its urban votes. On 26 November, some 19 helicopters were parked at the airport of a sleepy town of Bhavangar. Most belonged to BJP leaders, one belonged to Delhi Chief Minister and AAP convener Arvind Kejriwal, and another belonged to Chhattisgarh CM Bhupesh Baghel.

Most Congress candidates are fighting individual battles, heroically, making the BJP nervous in many crucial seats of Saurashtra and North Gujarat while the AAP is set to open its innings in Gujarat even if it loses badly in terms of seats.

And it’s not just the BJP which has rich candidates. Ahmedabad district’s 21 seats have 15 millionaires in the fray – eight from Congress, five from BJP and two from AAP.

Saurashtra’s 48 seats are witnessing a fascinating dance of democracy when compared to the 2017 Gujarat election. Nine Congress MLAs from the region joined the BJP in the last five years. The 2017 election took place when Hardik Patel led the Patidar quota agitation and the farmers’ discontent was at its peak.

BJP won only 19 of those 48 seats but it’s claiming to do better this time because it has “managed to improve the economy” of the mandis (Agricultural Produce Market Committee) of Saurashtra with Gondal mandi alone registering a turnover of Rs 23,000 crore this year, claims its board member Alpesh Dholaria. But the not-so-silently fought caste battles are a worry for the candidates.

In Ahmedabad, BJP leaders are talking of a clean sweep–winning 120 seats or more in the 182-member assembly–a possibility only if AAP cuts into Congress’ Muslim and Dalit votes but not into BJP’s urban votes. Without AAP’s help, the BJP can’t sweep the 2022 Gujarat election. If the BJP wins a staggering number of seats, it will be due to its “default position” in the Indian electoral system. But if it gets anything around its 2017 tally of 99 seats, then we should see it as an amazing fact that none is able to defeat BJP, not even the BJP’s own weaknesses.

The reason is clear. The 2022 election will be remembered as a completely caste-driven poll. The issue of Hindu identity is now more online and in the WhatsApp world of voters than offline. This election is not the 2002 election where a surge in “Hindu sentiments” was the dominant factor. Though late but not entirely unexpectedly, Amit Shah has started talking of “punishing the rioters of 2002” and evoking the sentiments of ‘Hindu identity’ in the Muslim-dominated constituencies but the caste fault line remains the biggest challenge for the BJP and Congress.

Congress remains at a disadvantage in this debate because Modi’s strong position in New Delhi and in driving the contemporary national political history and Gujarat’s national importance in contemporary India are “feel good” factors for all Gujarati voters.

Ahead of the first phase of polling on 1 December, a neutral assessment shows the BJP is comfortably placed on 75 of the 182 seats while the Congress is leading in 45 seats as their candidates have credibility and caste suitability. But in the rest of the seats, it’s “kaante ki takkar (cut-throat competition)” with the BJP having higher hopes due to AAP’s presence.

The BJP is concentrating on seats where the victory margin could be 10,000 votes or less with NOTA votes and AAP playing a crucial role. Also, former Congress leaders contesting the election are struggling because of the dent in their loyal caste voter-base even as BJP’s local leaders see them as outsiders.

In many seats, the fight is four-cornered – BJP, Congress, AAP and a strong independent candidate.

However, if the BJP wins Gujarat once more, it will mean that the second generation of Gujarat is ready to lap up the Modi phenomenon that started in 2001, when Modi articulated that ‘development of India’ and ‘Hindu cultural nationalism’ can go hand in hand.

It would mean that the young generation of Gujarat that desires change–visible in new trends of Gujarati literature, films, and theatre–is not looking for a dramatic change.

BJP leaders are totally focused on this evolution within the Gujarati society. Modi and Shah are hammering on about the Congress’ rule of the 1980s. Imagine how profound and powerful the politics of bad memories are.

Also, in urban areas, the issue of caste-identity and arrogance and corruption in the BJP government are not overriding Gujaratis’ desire for political stability and “security of family.” In urban Gujarat, “law and order” issue has a communal undertone. It remains so in this election.

There is no other convincing explanation to understand why, after 27 long years of BJP rule, the Gujarati voters are not tired of the incumbent party. In constituency after constituency, one can find enough of the urban middle-class BJP voters who are unmoved by issues of inflation, corruption in governance, and income inequality. They compare other state governments’ performance, sensex touching the Rs 60,000 mark, Modi’s “clarity in thinking” and a weakened world economy to underplay BJP’s weaknesses.

They continue to back the BJP because the party’s ideology hasn’t weakened for them.

Voters want change but not entirely

One can’t underplay the way BJP’s mammoth machinery and Modi’s strong identification with Gujarati asmita (pride) have been functioning to woo the next generation through this election.

This election campaign shows that whatever be the result, the BJP will remain firmly at the centrepoint in the “future of Gujarat” and its politics because no party or candidate has taken a stand on ideological issues at variance from the BJP.

The weaving of victory by the BJP in the midst of anti-incumbency and a caste-ridden election will have a national fallout.

This election will show how the BJP has mastered its blue book of election campaigning. BJP knows best how to shield election outcomes from getting overshadowed by ground realities such as people’s hardships in health and education, leaderless government and completely corrupt bureaucracy.

Gujarat is at the cusp of change, but it is less political.

If we talk to voters, it can be surmised that they want BJP’s alternative in the state but not of Modi.

More importantly, the alternative must not be drastically different from the BJP. That explains why Modi harshly asked former CM Vijay Rupani and his cabinet to step down overnight. The rude decision, which can backfire too, helped curb anti-incumbency to some extent.

This is the first election where the state’s old BJP leaders look tired and divided along caste lines and still many Congress and AAP voters claim “jitshe to BJP j. (BJP will win, of course).”

The reason is anti-BJP Gujaratis know that for BJP voters, their party is much more than a political outfit. It’s a family.
Sheela Bhatt is a Delhi-based senior journalist.