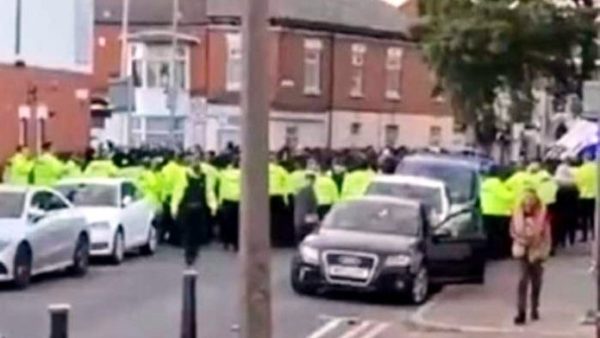 The Indian High Commission in the United Kingdom has sought immediate action from the authorities on the violence in Leicester between Hindus and Muslims. However, while criticising the violence, the High Commission only mentioned the “vandalization of premises and symbols of Hindu religion”, even though videos on social media showed that the Muslim community had also been attacked.

A group of masked men marched through Leicester with one seen armed with a 2×4 foot piece of wood amid violent clashes between Hindus and Muslims, media reports said.

Fifteen people were arrested during a policing operation in east Leicester “to deter further disorder” on Sunday evening after another night of violence, which has continued to plague the city in recent weeks, Daily Mail reported.

Footage has emerged showing the brewing tensions between the two groups with mass marches showing hundreds of people encroaching upon Green Lane Road – with very few police officers in sight to control the situation, the report said.

Many officers were deployed to London for the Queen’s ‘s funeral on Monday – but the chaos taking place in Leicester has led chiefs to redivert them back to the east midlands to be on hand to deal with any further potential unrest in Leicester.

Temporary Chief Constable Rob Nixon told LeicestershireLive that local officers had previously been deployed to help cover the funeral of Queen Elizabeth II – which is expected to lead to a million people travelling to London to pay their respects to the late monarch.

However, a review was then carried out after violence and disorder broke out again in the east of Leicester on Saturday night.

Some Leicestershire officers were recalled from the capital as a result and extra officers have been drafted in from other forces to help.

Leicestershire Police had a ‘large presence in Belgrave Road’ on Sunday afternoon, as a crowd gathered for an unauthorised protest.

A large number of people wearing masks then attempted to march down the city’s golden mile, but the road was closed and the group was dispersed quickly, Daily Mail reported.

Nixon on Sunday night said there will continue to be a strong police presence on the streets of the city.

He said: “This continues to be a fast-moving situation, linked with a large-scale policing operation. We are still using stop and search powers and any outbreaks of disorder will be dealt with positively. I am repeating my call for calm.”

There were ugly scenes across the east of the city on Sunday night, which began after police received reports of an unauthorised protest involving up to 200 people marching towards Highfields.

An opposing group then gathered. Police issued a dispersal order, but several other incidents of violence and disorder then broke out across the east of the city, Daily Mail reported.

Footage has since emerged of police wielding batons shouting at people to get back as bottles were thrown, narrowly missing officers.

Video of fights breaking out on the streets surfaced Sunday with police breaking up the two groups — just hours after two arrests were made when disturbances broke out at an unplanned protest on Saturday night and the early hours of Sunday morning, Daily Mail reported.

The trouble in the city came after a period of unrest between Hindu and Islamic communities in Leicester.

Violence first flared following the India v Pakistan Cricket match on August 28, which led to a number of incidents in the days that followed. However the situation appeared to be calming until last night. (IANS)