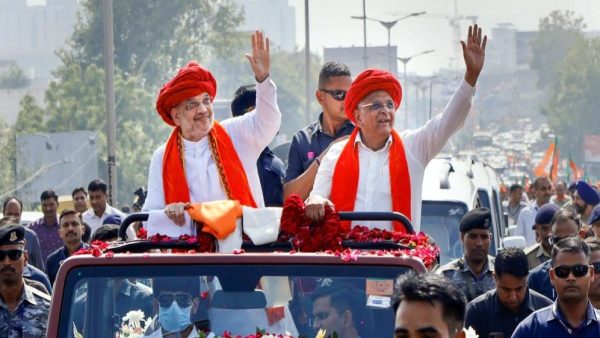 Back to aggressive Hindutva.

The BJP is eyeing a seventh straight win in Gujarat by banking on Hindutva tones and a heavy dose of developmental projects, and denying tickets to 38 MLAs to beat anti-incumbency.

The Bharatiya Janata Party (BJP), which has been in power in Gujarat for 27 years, is eyeing a seventh straight win in the assembly elections in the state by banking on Hindutva tones, loudest since 2002, and heavy dose of developmental projects, worth ?2 lakh crore in past nine months, and denying tickets to 38 MLAs, a year after it replaced almost the entire cabinet, to beat anti-incumbency.

Prime Minister Narendra Modi set the tone for the BJP’s campaign in his home state by carrying out a grand roadshow in Ahmedabad on March 11, a day after his party stormed back to power in the country’s most populous state of Uttar Pradesh and retained Uttarakhand, Manipur and Goa.

Apart from irrigation, healthcare and educational projects, the Prime Minister also inaugurated two key national events including the National Games and the Defence Expo 2022, both held in Gujarat this time.

The projects inaugurated by PM Modi also included the Smriti Van Memorial in Kutch in memory of the 13,000 people who died in an earthquake on January 26, 2001, and an aircraft manufacturing facility in Vadodara to be set up jointly by Airbus and Tata group.

In his first election rally after the Gujarat elections were declared, Modi on November 4 said at Kaprada: “This time I wish to break all my previous records. The record for (chief minister) Bhupendra (Patel) should be bigger than mine and I want to work to achieve this.” At this rally, the Prime Minister released the party’s election slogan ‘Aa Gujarat mein banavyu che’ (We have made this Gujarat).

This is quite a shift from the 2012 elections when Modi was the chief minister and the party had launched a campaign around the theme ‘Hun Modi No Manas Chu’ (I am Modi’s man). In 2017, the party’s campaign slogan ‘Hun chu Vikas, hun chu Gujarat’ (I am development, I am Gujarat) was strongly countered by the Congress’ ‘Vikas Gando Thayo Che’ (development gone beserk) campaign that tried to puncture the BJP’s claims of development in Gujarat.

Compared to the 2012 campaign, the BJP this time has gone for an inclusive campaign where people are to take pride in the development work done in Gujarat in the last two decades. The party is in power in Gujarat since 1995.

While the campaign hovers around PM Modi, the party has strategically worked on the candidates. The party denied tickets to senior leaders such as former chief minister Vijay Rupani and former deputy chief minister Nitin Patel and opted for new faces such as former Patidar quota leader Hardik Patel, cricketer Ravindra Jadeja’s wife Rivaba Jadeja and OBC leader Alpesh Thakor, among others.

The BJP has also decided to field only tested Congress turncoats. After 2017, 16 sitting Congress MLAs had defected to the BJP and only 11 of them got BJP tickets. Another six former Congress defectors also got tickets.

In 2017, the turncoats were directly given tickets for assembly elections. This time the party has tested the results of many turncoats in the by-polls, said a BJP leader. “Take for instance the Jasdan seat, where the BJP has never won except once in 2009 when Kunvarji Bavaliya, with the Congress then, vacated it following his election for Rajkot Lok Sabha seat. Bavliya contested on a Congress ticket in 2017 and won with a margin of about 10,000 votes. After he joined the BJP and contested the by-election in 2018, he won by a higher margin of over 20,000 votes,” he added. He said that the BJP was expecting victory by a comfortable margin for some tough seats in Saurashtra and Tribal areas that have been a traditional stronghold of the Congress, by fielding candidates who have won multiple times.

For the BJP, the focus is on Saurasthra and Kutch, where the party in 2017 bagged only 23 of 54 seats and the Congress won 30 primarily due to agitation by Patidars demanding reservation in job. With the issue now settled with 10% reservation for economically backward classes, the party believes Patels, considered as the BJP’s traditional voters, would return to its fold, helping the party to win these regions.

As a result, the party has given tickets generously to Patidars such as Ramesh Tilara (Rajkot South), considered close to Patidar strongman Naresh Patel, chairman of the Khodaldham Trust, and Babujamana Patel (Unjha), chairman of the Umiya Mataji Sansthan. The Khodaldham Trust has a huge following of Leuva Patidars while the Umiya Mataji Sansthan is popular among Kadva Patidars.

The AAP has gained popularity in the BJP bastion announcing ‘guarantees’ like free electricity, free education, monthly stipend to unemployed youth and for women above the age of 18 years if they are voted to power in the assembly elections. In local body polls in 2021, the BJP won 6,236 out of 8,470 seats, the rival Congress won 1,805 seats and the AAP made its debut winning 42 seats.

The BJP believes that the AAP will not be able to challenge it as rarely success in local body polls translate into win in bigger polls. Union home minister Amit Shah, who is also from Gujarat, on Wednesday said that in the state’s history the contest had always been bipolar and the third party had vanished after polls. “I believe that contest is between the Congress and the BJP and the AAP is nowhere,” he said.

“The AAP would cut the votes of the Congress that will ultimately increase the BJP’s seat tally. The OBC votes, a large chunk of which went to the Congress last time, will be split between the AAP and the Congress,” said another BJP leader, who did not wish to be named. He added that the OBCs constitute about 42% of the total vote share.

On October 8, posters and banners of AAP national chief Arvind Kejriwal donning a Muslim skull cap came up across the cities of Gujarat a day after a video was shared on social media of AAP’s Delhi minister Rajendra Pal Gautam attending an event in Delhi where some Hindus vowed to convert to Buddhism. “The Aam Aadmi Party’s ideology is against Hindus. In the coming days, the AAP will be wiped out,” said former Gujarat chief minister Rupani in a social media post then.

In the first week of October, more than 50 illegal structures at Beyt Dwarka island in Dev Bhoomi Dwarka district of Gujarat were demolished in an operation that went on for five days. Most of them were religious shrines belonging to the Muslim community as they were illegal. Similar operation was carried out along the coastal belt in places like Porbander and Gir Somnath regions. All of them are in Saurasthra.

PM Modi on October 10 lauded the anti-encroachment drive. “I used to say that Bhupendra Patel is a firm person and the people of Gujarat also got a glimpse of this recently. On the coastal belt of Gujarat, people who were enjoying by setting up illegal structures, watched in silence as it was all wiped off.
Congratulations Bhupendrabhai. When a determined person is ruling, the message reaches down,” he told at a rally in Jamnagar.

A few days before the PM’s Jamnagar visit, a video clip went viral of policemen publicly flogging a few men from the Muslim community who allegedly hurled stones to disrupt a Navratri event at Kheda on October 3. As per an FIR filed on October 3 at Matar police station by one Indravadan Patel, 43 people were accused of disrupting garba procession at Undhela village.

“Those who were flogged are all belonging to the minority Muslim community. Despite the atrocity at the behest of the police personnel having been widely reported, no action has been taken/initiated till date and is in complete violation of all rights of those flogged by those who are responsible for maintaining law and order,” according to the legal notice by Nafees in the first week of October.

On February 21, a caricature tweeted by the Gujarat BJP hailing the special court’s February 20 verdict sentencing 38 convicts to death in the 2008 Ahmedabad serial blasts case was removed after it caused a controversy. The cartoon depicted men wearing skull caps hanging by the noose. With a drawing depicting the scene of a bomb blast in the background, it had a tricolour in it and “Satyamev Jayate” written on its top right corner.

“The way the tickets are distributed and the narrative is being created for the ruling BJP in Gujarat, it seems they are back to 2002 when elections were held after the post Godhra riots. It was not so much in 2007 or 2012. The way Bilkis Banu convicts were released or ticket has been given to a Naroda Patiya convict’s daughter, it shows that the BJP is desperate this time,” said Ghanshyam Shah, an Ahmedabad based political expert.

Payal Kukarni, the daughter of Manoj Kukrani, who was convicted in the Naroda Patiya massacre of 97 persons in 2002, has been given a ticket by the BJP from Naroda. Manoj Kukarni was given a life imprisonment sentence and is currently out on bail.

The party has also re-nominated C K Raulji from Godhra who gave approval on the controversial release of convicted rapists of Bilkis Bano. He was not only a member of the committee to decide the issue but had later justified their release on August 15 as they are “Brahmins and cultured”.

On August 15, eleven men in Gujarat convicted for the 2002 gang rape of Bilkis Bano and the murder of seven of her family members walked free from jail after the state government allowed their release under a remission policy.