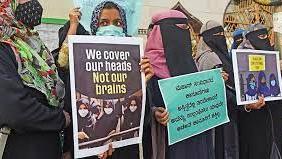 Students from Nizamia Unani Tibbi College and Anwarul Uloom College in Hyderabad stage protest in solidarity with the students opposing ban on Hijab in educational institutions in Karnataka.

The girl students at the Unani medical college near historic Charminar staged silent protest expressing their solidarity with those in Karnataka fighting for the right to wear Hijab.

Holding national flag and placards, the burka-clad protesters condemned the attempts to target girl students in the neighbouring state.

‘Hijab is my right and Hijab is my pride’, ‘I respect what you wear, you should respect what I wear’ and ‘Judge me by what is in my head, not by what on my hand’ read some of the placards. ‘What is my Hijab got to do with my education,’ asked another.

“Hijab has nothing to do with education. We have right to education but some people are trying to deny us that opportunities by raking up this issue,” said a student.

A huge protest rally was held at Anwarul Uloom College at Mallepally in the city. Large number of male and female students participated in the protest raising slogans of ‘Allah-o-Akbar’ and ‘We want justice’.

The protesters were carrying a banner in support of sisters in Karnataka. It carried pictures of students protesting in Karnataka including a picture of Muskan Khan, who has become symbol of the protest in support of Hijab after standing bravely to some right-wing activists heckling her at a college in Karnataka.

“Hijab is the Constitutional right of Muslim women and no one shall snatch it from us. We support Hijab,” reads the banner.

Meanwhile, the Congress has come out in open support of the students protesting for the girls’ right to wear hijab. The party has accused the BJP of stoking hijab issue to hide corruption. The Congress said that Bengaluru is hub of education and jobs, the multi-lingual, multi-ethnic, multi-cultural identity of the city and Karnataka has been a guiding principle of growth.

Congress General Secretary In charge of Karnataka, Randeep Singh Surjewala wrote an open letter and said, “Mired by the stench of corruption & mis-governance, BJP Govt of Karnataka and its vested interests are creating unwarranted issues just to break the unity and spirit of Karnataka’s students & youth.”

He said that he would request the parents, students & children to not let the self-serving rhetoric of the 1 per cent of the fanatics on either side to sacrifice your future as they are not interested in your education, your academic excellence, your bright future but only in propping up their failed political interests.

Student community has faced a serious setback in academics & acquiring gainful knowledge for last two years due to Covid as also BJP Govt’s sheer incompetence to meet the challenge, he said.

“There are many exams coming up, PUC exams being the most important. When our students are busy in preparation for the exams, these lumpen elements want Karnataka’s future i.e student community, to fight with each other on symbols and with stones & knives,” Surjewala added.

If students and children succumb to their nefarious design, the future will be jeopardised at the altar of their politics. Also, the freedom and equality that the Constitution gave us would be meaningless, he further said.

“Let’s reject this agenda of hate and continue being friends, holding hands and walking together for a better future. In this land of Holy Shankaracharya, Ramanuja & Basavanna, the Hindu-Muslim-Christian-Buddhist-Parsis have coexisted for thousands of years. In fact, we have come to respect each other’s culture and practices with pride,” he added. (IANS)