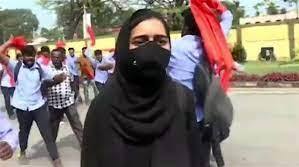 The row over the use of hijab or headscarves by women in educational institutions creates ripples in Parliament. In Bengaluru, the police banned gatherings and protests near educational institutions. Under the order of the Bengaluru police chief, any gathering, agitation or protests will not be allowed within a 200-meter radius of any school, college and other educational institutions for two weeks as a precautionary measure. The Karnataka High Court, which is hearing petitions filed by five women from a government college in Udupi, questioning hijab restrictions, has referred the matter to a larger bench.

The volatile situation in Karnataka is likely to continue as the state government has made it very clear that there will be no entry of students who do not shun hijab, or saffron shawls to schools. Tense situation continued in Karnataka in the backdrop of incidents of violence reported due to the hijab row. The police have arrested 15 persons so far. Amid continuing tensions over wearing of hijab by a section of students in the state, a single-judge bench of the Karnataka High Court, hearing petitions in the matter, on Wednesday referred the case to a larger bench.

Considering the seriousness of the situation and to prevent the confrontation in the capital city, Bengaluru Police Commissioner Kamal Pant has clamped prohibitory orders for two weeks from February 9 to 22. Any gathering, protest or agitation of any kind within the radius of 200 meters from the school premises, PU colleges, Degree colleges or other similar education institutes in Bengaluru city, will not be allowed, the order says.

Education Minister B.C. Nagesh and Home Minister Araga Jnanendra have said that as per the government circular, the students will have to come in only uniform to attend classes. The decision on reopening of schools and colleges will be taken by the state government. Presently, holiday has been declared for high schools, colleges in the state till Monday following the hijab row taking a violent turn.

Minister Nagesh stated that students insisting on wearing hijab could attend online classes. Until the decision comes, the students have to come to classes in uniform only. The reopening of classes will be decided after discussion with the Chief Minister. Nagesh explained what if students ask not to conduct exams on Fridays, such requests can’t be entertained.

“Only six students started this controversy. The children have have been provoked and took the decision to boycott classes. Some organisations and political parties have used this opportunity to foment trouble. The children must follow the 1995 rules on uniform. They should prepare for exams scheduled in April and maintain peace,” Minister Nagesh stated.

Meanwhile, the situation in Banahatti town in Bagalkot district has turned violent and prohibitory orders are clamped in the town under IPC Section 144.

In spite of curfew orders in Shivamogga district, the NSUI members on Wednesday morning entered First Grade Degree College and PG Research Centre. They brought down the ‘Bhagva Dhwaj’ or saffron flag and hoisted the Tricolour on Wednesday morning. The police rushed to the spot and dispersed the crowd. They have secured both the flags.

Authorities have clarified that ‘Bhagva Dhwaj’ was hoisted on the empty flag post in Shivamogga college on Tuesday. They have denied that Bhagva Dhawj was hoisted after taking down Tricolour.

Meanwhile, some Hindu organisations have given a call for bandh in the Banahatti town in Bagalkot district to condemn the violence.

The police department has arrested 15 persons in connection with the violence that broke out on Tuesday and sent them to judicial custody in Shivamogga and Bagalkot districts where the hijab crisis has taken a communal turn, according to sources.

The state High Court is taking up the matter this afternoon and the bench is expected to give the ruling on wearing of hijab by evening.

Education Minister B.C. Nagesh stated on Wednesday that action will be initiated against people who are behind raking up hijab row in the state. Only a few students are demanding hijab, they are not even listening to their own community leaders. In spite of the protests relating to hijab, the attendance of the students has not fallen.”

Araga Jnanedra, state Home Minister said that there is an attempt to ignite fire on the hijab row. He stated that arrests have been made in connection with the violence and he would share the details later.

Chief Minister Basavaraj Bommai discussed the developments in the High Court this morning with Advocate General Prabhuling Navada. The CM was also briefed about the situation in the state by Education Minister B.C. Nagesh. State DG and IGP Praveen Sood and Bengaluru Police Commissioner Kamal Pant met the CM Bommai and held a meeting regarding the situation in the state.

As per the information of the Home department, confrontation and violent incidents broke out in 7 colleges of five districts in the state. The protests have been staged in 55 colleges of 19 districts in Karnataka.

Harihara police have lodged four cases regarding the violence on the hijab row. Hindu organisations have called for a bandh condemning the attack on teacher Manjunath Naik. Naik was attacked with iron rods and his condition is said to be serious. The Hindu organisations are planning to take a march from Vaibhav Theater to Tehsildar office.

The decision on interim order regarding uniform and wearing of hijab shall also be taken by the Chief Justice, he added.

“There are questions related to the Constitution, there are aspects related to personal laws. Half a dozen court verdicts have been discussed. I have verified more than 12 orders in this regard. There are arguments and counter-arguments related to the case. Let the Chief Justice decide on handing over the matter to an extended bench,” Justice Dixit said.

Soon after the hearing resumed, the bench told the petitioners that if they agree, the matter would be handed over to the extended bench.

“I have verified the documents submitted regarding the case. There is a necessity to hand over the case to an extended bench.”

However, counsel for the students requested the bench to give interim order as only two months are left for this academic year. They sought an order on Wednesday only so that students could go to colleges.

Advocate General Prabhuling Navadagi, appearing for the government, submitted that everyone is looking forward to the court’s ruling. He also prayed against an interim order as it would amount to acceptance of the petition submitted.

Stating that he appreciates the sensitivity of the court, he contended that every institution has autonomy and it is the duty of the students to come in uniform.

“Wearing of hijab is not a fundamental religious practice of Islam. Other court benches have clarified this. While many nations have banned wearing of hijab in public places, several colleges in the country have banned hijab on the premises,” he said.