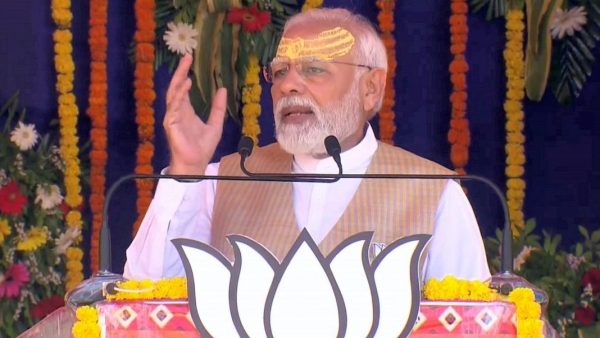 Modi had raised this very pitch in 2002 where every word spoken or written against him was successfully spun as an insult to the pride of the people of the state.

On November 6, when Prime Minister Narendra Modi said “I have made this Gujarat,” there was – for a moment – deafening silence across the sprawling pandal, filled with Adivasi members of the audience. Within moments, the crowds of tribal-majority Nana Pondha village in South Gujarat’s Valsad broke into a chorus: “Aa Gujarat mein banavyu chhe.” ‘I have made this Gujarat.’

Modi began his second round of campaigning on November 19 from the same tribal-majority Valsad district. This would be the first of as many as 20 rallies that Modi has and will address in the three consecutive days. The first phase of polling in Gujarat will be on December 1, for 89 seats.

This slogan is vintage Modi and the crowds spiritedly repeating it after him in regimented unison speaks of the kind of training he can impart. This is part of a firm thread spun by his genius – since the 2002 communal conflagration – of camouflaging criticism of him as the collective criticism of the people of Gujarat.

This is at play again in 2022, where praise for him is a paean to the collective pride of Gujarat. And as for critics – “These anti-Gujarat forces would be swept away once again.”

Modi had raised this very pitch in 2002 where every word spoken or written against him was successfully spun as an insult to the pride of the people of the state. They were described as an attempt by jealous anti-Gujarat forces to hit at the vitals of Gujarat’s gaurav or pride. The Gujarat Gaurav Yatra that Modi took out in 2002 in the backdrop of the devastating communal fire across the state used the words ‘Miyan Musharraf’ alluding to all the Muslims.

The attack on the ‘pride of Gujarat’ was made a constant refrain. And this has continued.

The people lapped up this brand of Hindutva that later became synonymous to the ‘vikas purush (man of development)’ ideal that Modi sought to represent while the well-entrenched ‘Hindu hriday samrat (king of Hindus’ hearts)‘ persona comfortably co-existed.

Meanwhile, history had already etched this communal divide in Gujarat which was all the more pronounced in the state’s heritage and commercial capital, Ahmedabad. This communal divide was meticulously fine-tuned, fashioned and sharpened into an electoral ‘Brahmastra (a most potent weapon)’ of sorts.

While “I have made this Gujarat” is the latest refrain for the immediate state elections, a slogan that has long been used with similar force across the country is “double engine government”, conveying the advantages of the same political party ruling at the Union government and in the states. In the previous assembly and Lok Sabha elections, the BJP almost issued a warning to say that it was crucial to have a single party ruling nationally and at the state-level to ensure the projects of the states get quick Central clearance.

This is the reason no psephologist, no journalist, no political pundit dares even guess that the BJP may lose Gujarat, though every single ground reality appears perfectly stacked against the party in the 2022 elections – as it was in 2017.

All journalistic and punditry often come close to predict a doom, but they stop here for they cannot put aside the two words: Narendra Modi. It is another matter that psephologists in 2022 are predicting a win for the BJP that is even higher than Modi’s and the party’s best of 127 out of 182 seats in the Hindutva heat of 2002.

As of now, all that would be best left for December 8, 2022, when the results are declared. Because, as of now, Modi is batting – and he is the Dhoni of BJP, the great finisher.

As Modi says, “I have made this Gujarat,” BJP has already completed its ‘Gaurav Yatras’ in all the districts of the state to publicise the “unprecedented development work carried out in the state under Modi’s guidance.”

It is often during the final days of election campaigns that Modi, who knows well that the votes pooled by his party are polled in his name, simultaneously plays the martyr and the messiah. So while Gujarat’s gaurav is always put on the altar during every election, the messiah who has kindled that pride is also portrayed as the fall guy who is attacked by ostensible “enemies of Gujarat.”

And this plan has the capacity to work invariably. This time, Gujarat’s ‘pride’ is the Delhi chief minister’s envy.

“Calling the Congressmen ‘enemies of Gujarat’ is cliched and yet, he has successfully done so. This time the attack is on AAP chief Arvind Kejriwal who has already been described by the BJP’s social media machinery as ‘Dilli ka thug’, as a rank outsider who is here to disrupt the state’s development process. So when you say ‘I made this Gujarat,’ it means, ‘we Gujaratis, led by Modi, have made it a state for us to be proud and others to be envious of’,” says political and social scientist Ghanshyam Shah.

Constant othering – of states, the rest of the country, and opposition

He goes on, “So this othering of Kejriwal has a subtle ‘Gujarati versus non-Gujarati’ rhetoric. This is similar to how, when it comes to the Congress, blame is apportioned on the Nehru-Gandhi family for all the wrongs in the country and Gujarat.”

But Shah says that it is not just a process that aims to other Kejriwal and all those who question Gujarat’s claim to good governance. In the desperation to ensure Gujarat remains in the BJP’s hands, the latter is keen to other other states too, and the rest of the country.”

Shah explains, “Take the most recent example. Two mega industrial projects tipped for Maharashtra were suddenly moved to Gujarat. We have also seen all top heads of states, like US’s Donald Trump, Japan’s Shinzo Abe and China’s Xi Jinping, being brought to Gujarat. The latest, but certainly not the last, was Secretary-General of the United Nations, Antonio Guterres, who visited Gujarat in October.”

Shah says that this explains the thought behind another BJP slogan, “Aapnu Gujarat, aagvu Gujarat (‘Our Gujarat, Unique Gujarat’)”. “These claims act like brownie points and help garner the votes of the urban and the neo-urban classes, but it is not a happy situation nationally.”

“In 2002, it was Gujarat Gaurav, which has remained a constant. In 2004, when the United Progressive Alliance government came to power, Modi raised the ‘Injustice to Sardar Patel by the Nehru-Gandhi family’ pitch and this by implication meant ‘injustice to Gujarat and its asmita’ – pride and identity. Intermittently, ‘Sabka Sath Sabka Vikas‘ was used and now the expanded version, ‘Sabka Sath, Sabka Vikas, Sabka Vishwas’ is brought into play according to the audience,” says Shah.

December 8, 2022, will unravel the mystery of how effective the latest bout of sloganeering was.