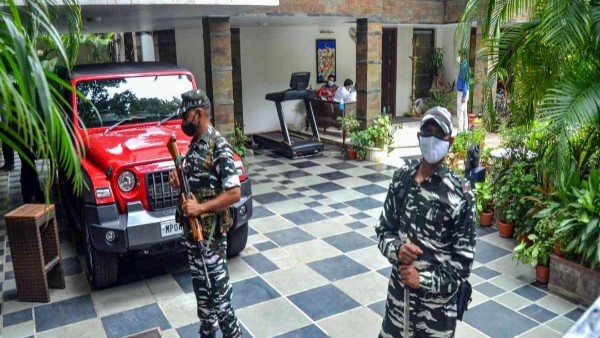 Media group Dainik Bhaskar and an Uttar Pradesh-based news channel were raided by Income Tax officials who launched searches in their offices across the country around 5.30 am. Both have been accused of tax evasion and floating shell companies in a statement released by government sources. Raids took place at over 30 locations of Dainik Bhaskar in Delhi, Madhya Pradesh, Rajasthan, Gujarat and Maharashtra. The homes and offices of the group's promoters were also raided. Uttar Pradesh TV channel Bharat Samachar’s offices in Lucknow and the home of its editor were also searched. The raids were based on "conclusive evidence of tax fraud" by the channel, said, officials. Both media houses had recently put out reports critical of the government's handling of the coronavirus crisis, particularly the second wave of Covid that swept through India in April-May.

A day after hitting out at the Centre during her Martyrs’ Day speech, Chief Minister Mamata Banerjee on Thursday came down heavily on the BJP government at the Centre on the Pegasus issue, alleging that the raids conducted at media house Dainik Bhaskar’s office are a result of the vindictive attitude of the (Narendra) Modi government.

She again appealed to all the political parties to come forward and unite to defeat the “autocratic government” at the Centre and save the “largest democracy of the world”.

Criticising the Central government for the raids conducted at several offices of Dainik Bhaskar across the country on Thursday, Banerjee said, “This is an effort to bulldoze the reporters and throttle the voice of the people. Dainik Bhaskar was boldly reporting on the Pegasus issue and on the bodies that were thrown into the Ganges by the Uttar Pradesh government. That is why they have been victimised. I strongly condemn this”.

Terming the Pegasus issue as more dangerous than the Emergency and even bigger than the ‘Watergate’ scandal in the US, the Chief Minister said, “Today everybody is under threat. The judiciary is under threat. The political parties are not allowed to speak. The voices of the civic society are throttled. All impartial organisations are politicised. All agencies live under the fear of Pegasus. Even the ministers and the leaders of their own party (BJP) are not safe.

“If the judges become weak, if the journalists become unsafe, if the civic society is scared, where is the democracy? It is autocracy. Once we believed that speaking on WhatsApp was safe, but now we know that it is no longer safe. Facetime can also be hacked. All our phone calls are being recorded. So where do we go? Everyone is living in fear,” she added.

Making it clear that she is just of many who want to come forward and play an important role in uniting all the anti-BJP forces in the country, the Chief Minister said, “India is the biggest democracy in the world and it is our responsibility to protect it, or else the people of the country will never forgive us. We want impartial justice. We will not bow down our heads. We need to fight it out together.”

Confirming that she has got an appointment with Prime Minister Narendra Modi in Delhi, Banerjee said, “I shall try to go to the Parliament if I am allowed. If I go, I shall have the opportunity to meet several leaders. I cannot assure now whom I shall meet, but there are many who want to speak to me. Let me see the timing and the situation, then only I shall take a final call.

Shiromani Akali Dal (SAD) President Sukhbir Singh Badal also condemned the Income Tax raids on media outlets, saying the latter was being persecuted for exposing the NDA government’s “mismanagement” of the Covid-19 pandemic, besides asking tough questions on the Union government’s surveillance on politicians, journalists and activists through Pegasus spyware.

In a statement here, Badal said it was condemnable that the NDA government had targeted Hindi daily Dainik Bhaskar and the Bharat Samachar group because they had posed tough questions to the government in keeping with high standards of journalism.

“The Union Government should not try to muzzle the freedom of the press in this manner. The SAD stands resolutely in solidarity with the media in this hour of crisis.”

Badal said the Centre should respond positively to criticism on sensitive issues like Covid-19 mismanagement as they reflected the sentiments of the citizens of the country.

He said Dainik Bhaskar had exposed the manner in which the pandemic was mishandled both by the Centre as well as several states. “It had also covered the surveillance of several politicians as well as journalists and activists through Pegasus spyware extensively which was probably not to the liking of the NDA government.”

Badal said it had also come to light that even employees of Dainik Bhaskar had been victimised with the mobiles of employees present in offices being seized and night shift workers being barred from leaving the office. This kind of persecution of the fourth estate does not bode well for democracy, he added.

Asking the NDA government to bring about a course correction in its functioning, the SAD President said the government was also following a “vindictive approach” towards farmers and the Kisan Andolan solely because the latter had questioned its policies.

“Farmers have rightly questioned the logic behind bringing in the three agricultural laws which help only the corporations and will result in the corporatisation of agriculture in the country. Instead of listening to the farmers and resolving their grievances, the Centre is adopting an intransigent attitude towards them.”

He also questioned the logic of Union Agriculture Minister Narender Singh Tomar in saying that the government was open for talks with farmers after clearly stating that the three ‘black’ laws would not be repealed.

“The government should repeal the three agricultural laws first,” he added.

The Congress too slammed the government over IT raids on media houses and said that instead of protecting the nation, central agencies have now begun to act as poachers for intimidating the whistleblowers.

Addressing a press conference, senior leader Abhishek Singhvi said, “The IT raid on Dainik Bhaskar highlights the dangerous, dismissive, and draconian nature of the BJP government.”

“How should we define whatever happened today? There are many words – totalitarianism, tyranny, dictatorship, fascism, authoritarianism, autocracy, despotism, absolutism, Caesarism, and so on and so forth,” he added.

He said that the newspaper was raided as its reportage exposed the grisly sight of bodies of Covid victims floating in the Ganga and washing up on the banks in towns in Uttar Pradesh and Bihar, possibly thrown into the river because of the lack of means to cremate them. The reports also revealed bodies buried in shallow graves by the river in UP.

The Income Tax Department has conducted searches at the offices of media entity Dainik Bhaskar at several locations across the country over alleged tax evasion.

According to people in the know, raids have been conducted at the Bhopal, Indore, Jaipur and Ahmedabad premises of the Dainik Bhaskar group.

The Income Tax Department is conducting a search at the offices of Bharat Samachar News channel also and the residences of its promoters and Editor-in-Chief. (IANS)