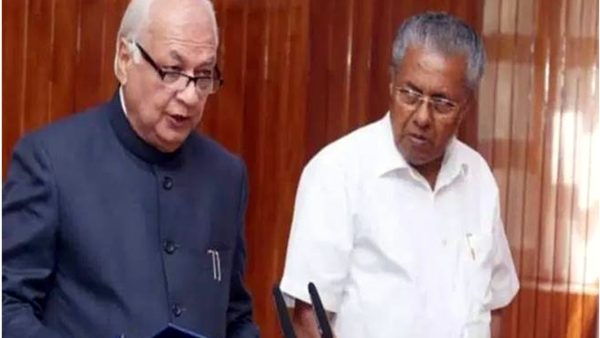 Eyeing the Governor with suspicion.

Tensions between Governor Arif Mohammed Khan and the Kerala government began soon after he entered the Raj Bhawan in 2019, with one spat leading to another ever since.

Run-ins with the governor may have become a bit of a routine in non-BJP-ruled states but the impasse between the Raj Bhavan and state secretariat in Kerala is in a league of its own.

Matters came to a head Tuesday with a show of strength by the Communist Party of India (Marxist)-led Left Democratic Front (LDF) government. Leaders of the party, aided by sympathetic political parties from neighbouring states, held a raucous protest against Governor Arif Mohammed Khan.

Not only did they accuse Khan of being an agent of the Rashtriya Swayamsevak Sangh (RSS), they also called for abolishing the post of governor altogether.

The immediate trigger was Khan’s bid to oust the vice-chancellors of several state universities due to purported anomalies in the hiring process — a move the LDF countered by trying to remove him as chancellor of state varsities — but the tussle has a long and complex provenance.

The friction, in fact, began almost as soon as Khan entered the Raj Bhavan in 2019.

A former Congress Union minister and a one-time BJP member known for vocally supporting many of the party’s Muslim-related policies, Khan’s first brush with controversy was at Kannur University in December 2019, where he and historian Irfan Habib butted heads over the Citizenship Amendment Act (CAA).

He has also blamed the university’s V-C for the fracas and has repeatedly claimed that the LDF government has filled universities, including Kannur, with loyalists and is running them like fiefdoms and that it is up to him as chancellor to effect a clean-up.

In an embarrassment to the state government, the Kerala High Court Thursday said that Priya Varghese, wife of the Chief Minister’s private secretary K.K. Ragesh, was not qualified to be appointed as an assistant professor at Kannur University.

The court directed the university reconsider her credentials and modify the rank list. Higher education minister R. Bindu has said the university will decide on the next steps since it made the appointment.

In August this year, Khan had stayed Verghese’s appointment on grounds of nepotism, which the university had challenged in court.

But universities are not the only arena where the governor vs state government face-off has been playing out.

Khan has quibbled with the LDF over various issues, from the CAA to the contentious farm laws that the Modi government repealed last winter. He has also taken potshots at the state government, saying that its only source of revenue is lottery and liquor.

He has even asked for the CM to to take action against state finance minister K.N. Balagopal over a speech the latter had made at Kerala University — and when that didn’t happen, he hinted that “someone” might move court over the matter.

On the flipside, the LDF has accused Khan of working at the behest of the RSS and BJP to destroy higher education in the state. Government functionaries have also alleged that Khan’s excoriation of the dispensation has not stopped him from demanding costly facilities at the Raj Bhavan, including a Mercedes Benz car worth Rs 85 lakh, a dental clinic, and regularisation of staff working there.

While there was a brief interlude during the pandemic when Governor Khan had praised the Kerala government effusively for its Covid management, the last three years have essentially been one skirmish after another, one often leading to the other. Here’s a look at some highlights, or lowlights as the case may be, of the tangle of conflicts.

The first flames of the ongoing conflagration between Governor Khan and the state government seem to have been lit at the 80th edition of the Indian History Congress, held at Kannur University from 28-30 December, 2019. Kannur happens to be the home town of Chief Minister Pinarayi Vijayan.

While delivering his inaugural address, Khan digressed from his written speech to defend the CAA, which had been slammed by some earlier speakers, including Communist Party of India (Marxist) leader K.K. Ragesh, who was then a Rajya Sabha MP.

Amid an uproar in the audience, Khan described those who were against the CAA as “potholes filled with stinking water”. He also attributed a quote to freedom fighter Maulana Abul Kalam Azad. Upon this, Habib stood up and asked him to quote Mahatma Gandhi’s assassin Nathuram Godse instead.

A melee ensued with both the audience and those on the dais exchanging barbs.

Later, the university was asked by the Raj Bhavan to submit a report on the incident and several officials, including the chief secretary and the vice-chancellor were summoned.

Since then, Khan has mentioned this episode on numerous occasions. He has called Habib a “goonda” who tried to physically attack him and claimed that the police did not take appropriate action.

He has also said that the university V-C Gopinath Ravindran was complicit and a “criminal” and had “ruined” the university at Kannur, which happens to be the hometown of CM Pinarayi Vijayan.

The Kannur V-C, especially, is a subject that Khan is particularly bitter about. Indeed, the first of the V-C appointment-related frictions in Kerala took place when the issue of Ravindran’s reappointment came up in August 2021.

Khan did approve it after some delay, but he later wrote to CM Vijayan saying he regretted it.

“I wish to make it clear that in the matter of Kannur University I did something against my better judgement and I do not wish to do such things any more,” he wrote in a letter dated 8 December, 2021. In this missive, he also urged the government to remove him as chancellor of universities.

Another occasion that prompted Khan to ask for relief from his post as chancellor was when the V-C of Kerala University, V.P. Mahadevan Pillai, tersely turned down his request to have an honorary Doctor of Letters (DLitt) conferred on then President of India Ramnath Kovind.

Pillai’s letter let the Governor know that many members of the university’s syndicate, or chief executive body, had “rejected” the proposal.

As has been his wont, the snubbed Governor vented to mediapersons in January this year. He said he did not “feel like showing my face to anybody outside Kerala” because of the kind of “language” Pillai had used.

On 23 October, Khan’s controversial call for the resignation of nine vice-chancellors led to a major political slugfest in the state.

His order came after the Supreme Court verdict that held that the appointment of a university vice-chancellor would not be considered legal if the search committee recommended only one name rather than three to five candidates, as mandated by UGC regulations.

The SC had also quashed the appointment of the V-C of APJ Abdul Kalam Technological University on this ground. Taking this as an example, Khan called for the resignation of several other V-Cs of state varsities.

The state government has contested this vociferously, with law minister P. Rajeeve maintaining that the governor went above his mandate. Rajeeve has said a chancellor (the governor in this case) can remove a V-C only on two grounds — financial misappropriation and for misconduct. Even that requires the constitution of a commission under a judicial officer based on whose recommendation the Chancellor needs to act. “There is no provision to expel for any other reasons,” he said.

The V-Cs too have dug their heels in and taken the legal route. However, the Kerala High Court in a separate case has now quashed the appointment of Dr K. Riji John as the V-C of Kerala University of Fisheries and Ocean Studies. He was one of the V-Cs who had been asked to resign by Khan. The Kerala government is now preparing to go to the Supreme Court with the plea that this is an encroachment on states’ right to legislate.

Disorder in the House

Differences between the government and the governor over CAA spilled over in an unprecedented way into the state Assembly in January 2020 when Khan read his address to the Budget session of the state Assembly with a rejoinder that he did not agree to the paragraph on CAA.

“I’m going to read this para because the Chief Minister wants me to read this. Although I hold the view this doesn’t come under policy or programme. Chief Minister has said this is the view of government, and to honour his wish I’m going to read this para,” Khan said before reading the portion critical of CAA. The governor’s address to the Budget session is cleared by the state cabinet and is not a personal address of the incumbent.

Then in December 2020 when the government decided to convene a special session of the Assembly to discuss the farm laws against which farmers were agitating across the country, Khan put his foot down. He refused to convene the session even as the recommendation from the cabinet was sent to the Raj Bhawan twice. However, he finally gave in and the session happened on 31 December that year.

“He wanted a known RSS man as his private secretary in Raj Bhavan and when objections were raised in the file, he insisted that the offending official who wrote those notings be transferred. He refused to read the address to the Budget session till that was done,” alleged a senior government functionary.

ThePrint sought a response from Governor Arif Mohammed Khan and his staff via phone, WhatsApp, and e-mail over several days. This story will be updated when a response is received.

Khan has made no secret of his disdain for the Kerala government’s revenue streams, but he seems to have on occasion made some significant demands on the exchequer, suggest documents accessed by ThePrint.

In a letter dated 18 December, 2021, the principal secretary to the governor wrote to the government’s general administration department about the planned purchase of an obsidian black Mercedes Benz of the “GLE class CKD V167 GLE300d4M LWB MY22”.

“[T]he price of the new vehicle comes [to] around Rs 84,24,670 as per the invoice received…Since there is only a token provision of Rs 1000 under the head of account ‘2012-03-Governor-800-97-Purchase of Motor Car’, orders sanctioning additional authorisation for Rs 8517670 for the above purpose may be kindly issued which is inclusive of the price of the accessories,” reads the letter.

It also says that the governor’s existing vehicle should be transferred to the tourism department.

In another letter dated 26 July, 2022, Davendra Kumar Dhodawat, principal secretary to the governor, sought Rs 10 lakh from the government to establish a dental clinic in the Raj Bhavan premises.

Speaking on condition of anonymity, a state minister told ThePrint: “The finance department asked for some usual clarifications before releasing the money. It is important because we are in a phase of financial austerity. But he was very upset about the clarifications sought.”

Another unusual request from Khan came in December 2020, when he wrote to the CM asking him to regularise the employment of 20 workers who had been engaged casually through a state scheme for various tasks in the Raj Bhavan.

In his letter, he pointed out that these “poor” and “lowly paid casual workers” had a record of continuous service for four to seven years. The workers, as listed by Khan, included a gardener, sweeper, female attendant, and telephone operator.

He also asked for the regularisation of the services of the Raj Bhavan photographer under the head of cypher assistant. Khan cited the photographer’s 22 years of service and his own “satisfaction” with the man’s work.

“All his demands have been met,” said a government official. Khan is yet to respond to ThePrint’s queries on the matter.