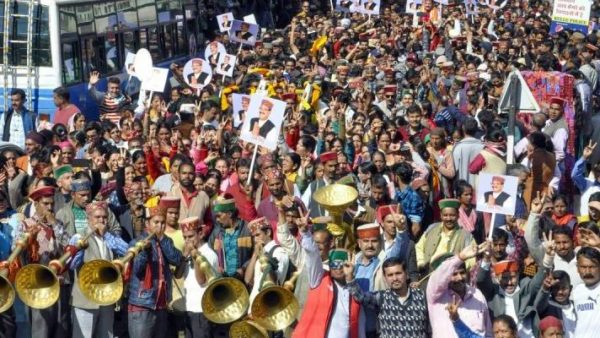 With strategists of the BJP and opposition Congress anticipating a neck-and-neck contest in the Himachal Pradesh assembly elections, the two rival parties have started reaching out to promising rebels and independent candidates, hoping to cobble up a majority in case of a hung assembly.

Both parties had started wooing disgruntled ex-leaders within two days of polling. The BJP suspects that at least 12 of its rebel leaders may dent the prospects of official candidates. Both parties are expecting a tight contest in 25 assembly segments.

In Kinnaur, former legislator Tejwant Negi made the elections in the assembly segment a triangular contest. Tejwant has represented Kinnaur from 2007 to 2012. However, he was denied a ticket this time as he lost the polls in 2012 and 2017.

In Mandi, Praveen Sharma, a young BJP leader, who lost the ticket race, has thrown his hat in the ring as an independent, while former Union Minister Sukhram’s son Anil Sharma is contesting the polls for the fifth time. Meanwhile, the Congress has pitted former Pradesh Congress Committee president and former minister Kaul Singh’s daughter Champa Thakur. Kaul Singh had lost the election in 1990 and 2017.

Perhaps, the most interesting contest is in Theog, where former state Congress president Kuldeep Singh Rathore is locked in a quadrangular battle as Vijay Pal Khachi, son of Congress stalwart JBL Khachi and Indu Verma, wife of former BJP MLA Rakesh Verma, are in the fray as Independents. The seat, once a fortress of veteran leader Vidya Stokes, is currently presented by CPI(M)’s Rakesh Singha, who is also seeking a second term.

Indu joined Congress ahead of the assembly elections and was hopeful of getting the ticket. However, after Congress fielded Rathore, Indu jumped into the fray as an Independent.

In Banjar, former Lok Sabha member Maheshwar Singh’s son HIteshwar Singh, who is a scion of the Kullu royal family, is contesting the polls as an Independent, dampening the BJP’s prospects.

In Nalagarh, another former BJP MLA, KL Thakur is giving tough competition to Lakhwinder Singh Rana, a two-term Congress MLA, who jumped ship ahead of the elections.Thakur had been elected to the state assembly in 2012, but lost in 2017. On November 10, Thakur had called on chief minister Jai Ram Thakur at his residence Oak Over .

Asked about the possibility of rebels reconciling with the party, Thakur said, “A few of them are in touch with us.”
Meanwhile, Congress general secretary Vikramaditya Singh said, “We are concerned that even if we form the government, it can be brought down. Our halfway mark is 35 seats, but there is no guarantee that MLAs will not be pressured by the Enforcement Directorate and the CBI.”

He also requested the Congress high command to send their observers, in case of any such situation erupts. “We cannot rule out such a situation seeing what has transpired in other states. We have to be prepared.”

On the significance of high polling in the state, Himachal Pradesh University political science department head Harish Thakur said, “The belief that increased voting accounts for change is a myth as governments have changed even when there was a decrease in voting percentage. High polling in Himachal may signify a change or even a call for a change in tradition (rivaz).”

Trend over the years

Himachal voters have been preferring independents over smaller parties. In almost every election held in the state since 1972, candidates of small parties may not have been able to register their presence in the legislative assembly, but independents have been winning the elections.

In 1982, the role of independents became so important in the hung assembly that Congress had to form the government with their help. The BJP had won 29 seats, while the Congress had won 31 seats. Six independents and two MLAs Ranjit Singh and Shyama Sharma were elected on Janata Party tickets.

Every independent, who won the assembly elections as an independent left his mark on the politics of the state for years after joining the BJP and Congress. Of these, Major Mankotia and Gulab Singh Thakur, Mansha Ram became ministers. As many as seven independents were elected in 1972, six in 1982, two in 1985, seven in 1993, six in 2003, five in 2012 and two independents in 2017 reached the state legislative assembly.
In 1988, chief minister Virbhadra Singh had formed a minority government for a mere 18 days with the support of Independent MLA Ramesh Dhawala. However, the BJP rebel, chose to return to the BJP, resulting in the Congress government falling within a few days. Following this, the BJP formed a coalition government with the Himachal Vikas Congress (HVC), an outfit floated by former Congress leader Sukh Ram. The HVC had managed to win five seats in the election and thus helped in formation of the BJP-HVC combine. As such, a situation where Independents could play a crucial role in government formation in case no party gets a clear majority, cannot be ruled out.

Rebels in the running

The state had recorded 75.6 % polling the percentage is likely to rise as the election commission is yet to receive the additional postal ballots. The key strategist of both parties are tapping the independent and the rebels who are likely to win in a bid to cobble up the majority in case of a hung assembly, the counting for the elections will be held on December 8.